Isuzu has released the brand new MU-X – and it’s much more than a facelift. In fact, the new MU-X appears to be an even more attractive proposition for Australian caravanners.

Chief among the changes is an upgrade to the vehicle’s towing capacity. While the first-generation MU-X was capped at 3000kg towing, with 300kg on the towball, the new MU-X, which went on sale in Australia on August 2, is rated to tow up to 3500kg, with a towball maximum of 350kg.

Further, the well-respected 3L turbodiesel engine found in the original MU-X has been reengineered, and now puts out 140kW of power and 450Nm of torque. A new six-speed automatic transmission is part of the package, too.

The sophisticated Intelligent Drive Assistance System (IDAS), first seen in the Isuzu D-MAX launched last year, has been rolled into the MU-X and is standard across the range.

As if that wasn’t enough, the MU-X has been given a new interior that features more space and improved comfort, Android Auto/wireless Apple CarPlay, and a dynamic exterior look. It’s fair to say that the changes to the Isuzu MU-X are much more than skin deep.

TOWING WITH THE ISUZU MU-X

GoRV will have more to say on the MU-X’s performance as a tow vehicle, especially how it handles heavy loads, in a future issue. But for now, let’s look at the numbers. 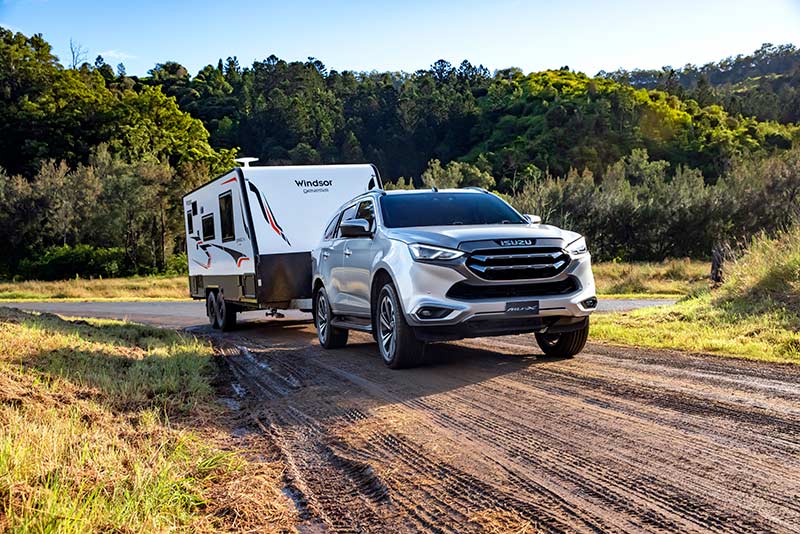 The 3500kg towing capacity is available across the range and represents a 500kg increase over the earlier MU-X. However, it’s important to keep the Gross Combined Mass in mind when towing at or near its maximum capacity, and adjust your vehicle payload accordingly. For example, if you were to tow 3500kg with the LS-T 4WD, payload in the vehicle would be limited to 225kg.

If touring with the family, a better bet might be to limit the weight of the van to, say, 3300kg in order to increase in-vehicle payload.

While the previous MU-X was not warranted for use with a weight distribution hitch, it’s a different story with the new version. In fact, a genuine Isuzu WDH is available with this model.

The new 4JJ3-TCX 3L common-rail four-cylinder turbodiesel engine is an evolution of the 4JJ1-TC HI that powered the previous-generation MU-X. Delivering linear and progressive torque across the entire rev range, it is the same engine that debuted last year in the new D-MAX; however, it further benefits from technology designed to reduce nitrogen oxide and hydrogen sulphide emissions.

It offers a 10kW and 20Nm increase in power and torque over the MU-X’s previous engine. Mid-range torque has also been improved, generating 400Nm from 1400-3250rpm. An impressive 300Nm is produced from just 1000rpm (just above idle), according to Isuzu. This should be of particular benefit to 4WDers who need that low-down torque for crawling up hills in low range.

Isuzu has increased the size of the fuel tank from 65L to 80L – a welcome change that was the result of direct feedback from customers. The manufacturer claims fuel consumption of 7.8-8.3L/100km when driving – we will report on some fuel figures when towing a reasonably heavy van as soon as possible.

IDAS is described by Isuzu as a comprehensive suite of safety and convenience features that “dramatically improves the level of safety for all occupants, pedestrians and other road users”. It is standard on all variants of the new MU-X.

At the heart of IDAS is a 3D stereo camera that can precisely detect and measure distance, size, velocity and the depth of vehicles, pedestrians, etc. This system allows the MU-X to detect more subjects with lower risk of miss-detection and take necessary countermeasures to mitigate risk. Among these features are autonomous emergency breaking with turn assist, and a forward collision warning system, which intervenes when the vehicle detects certain dangers. The traffic sign recognition function, which has been calibrated for Australian roads, scans the road for speed and other traffic signs, and relays the information to a 4.2in in-cab display.

The lane departure prevention, lane departure warning, and emergency lane-keeping systems will, depending on the circumstances, either alert the driver when the vehicle is venturing out of the lane or will actively steer the MU-X back towards the centre of the lane at speeds above 60km/h.

Other safety features include eight airbags, post-collision braking, blind spot monitoring, anti-lock braking – and much more. The LS-T even has a tyre pressure monitoring system.

The seven-seater MU-X has been overhauled on the inside, too. While the dash appears to bear some of the characteristics of the first-generation MU-X, it looks more modern, especially with the addition of the 9in infotainment screen (available in the LS-U and LS-T). The LS-M gets a 7in screen.

All models now have push-button start, while the top-end LS-T features remote engine start, allowing the driver to heat or cool the cabin before stepping inside.

Naturally, the new MU-X incorporates a raft of other internal changes, from increased leg space in the second and third-row seating areas, to the quality of the upholstery and trim, the number of USB charging ports, and new storage compartments.

The all-new Isuzu MU-X promises to be an exciting tow vehicle, especially with its class-leading 3500kg towing capacity, revised turbodiesel engine, advanced safety system and – finally – a much-improved interior. There was nothing wrong, per se, with the previous MU-X interior; however, it really hadn’t changed much since the vehicle was first launched.

We are looking forward to conducting a proper tow test and will let you know how it performs as soon as possible.