According to the company, the seventh-generation Isuzu D-MAX is the product of six years of development testing, including more than 4 million kilometres of on-road testing.

Launched on August 7, the ute is available in three cabin types: Single Cab, Space Cab and Crew Cab. There are four model variants: SX, LS-M, LS-U, and the range-topping X-TERRAIN.

“The Australian specification of the all-new D-MAX was designed with feedback from Australian drivers, our dealers and the media,” Isuzu UTE Australia managing director Hiroyasu Sato said at the launch. “We’ve refined the areas that traditional ute drivers need, introduced features that families want and improved its capability to make the D-MAX the ultimate all-rounder for modern working families.”

Among the changes, the new D-MAX features improved offroad capability, with a rear diff-lock, up to 800mm of wading depth, and an upgraded Terrain Command System.

While the X-Terrain variant gets numerous additional features, including the ability to remote-start the engine, the suite of safety features, known as the Intelligent Driver Assistance System (IDAS), is standard across the range. 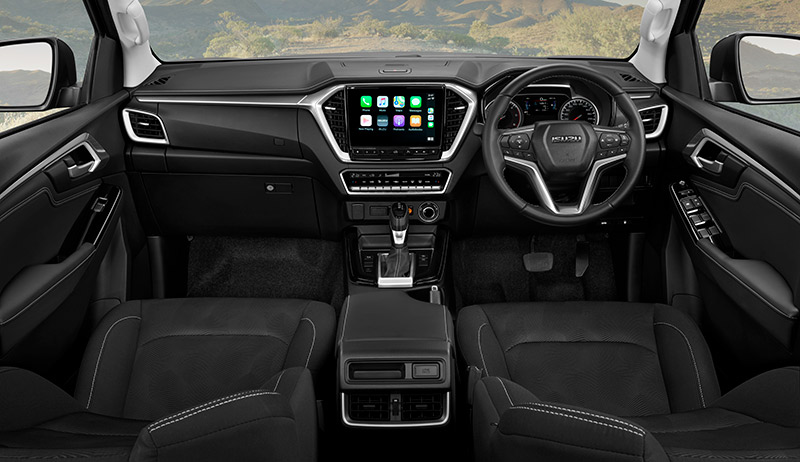 Among the IDAS features is Adaptive Cruise Control with stop-and-go traffic functionality, as well as Autonomous Emergency Braking, Blind Spot Monitoring, Lane Departure Prevention, not to mention eight-airbags, including a knee and centre airbag.

According to Isuzu, IDAS has been extensively tested in Australia, enabling Isuzu’s engineers to finely calibrate its Traffic Sign Recognition function for our roads.

Standard across the range, a new array of sensors now control headlight and windshield wiper operation, automatically turning them on and off when needed. Automatic High Beam Control autonomously dims the high beams when traffic is detected.

The new 4JJ3-TCX engine produces 140kW at 3600rpm, and 450Nm (peak torque) at 1600rpm through to 2600rpm. This represents a 10kW/20Nm improvement over the previous engine. According to Isuzu, the engine is more efficient, with noise, vibration and harshness further reduced. “Compared to the previous generation, this engine is as quiet as they come,” Isuzu says.

Engine power is transferred to the road through a more efficient and faster-shifting six-speed automatic or six-speed manual transmission, according to the company.

The 3500kg towing capacity of the new D-MAX remains unchanged – we hope to conduct a tow test in the near future, so stay tuned.