Have you ever wondered what happens to vehicles that have been in a front-end crash? I spotted just such a vehicle – a VW Kombi that was since converted into a lovely little caravan.

The owner, Steve Morris, did the conversion himself many years ago. He says it is the most photographed Volkswagen in the world! I think the pictures show how professionally it has been converted.

It even has an awning and a very nice paint job.

We normally have a Christmas in July at Walkamin but this year, covid made us put it back to August 1 and we had a great catered lunch, with about 50 of us scoffing chicken, pork and beef plus all the trimmings, and this was followed by some scrumptious desserts.

My scales the next day revealed the folly of eating all that lovely grub and the bottle of moscato that brightened the occasion. I even shared a Christmas hug with the park co-owner, Dallas!

I’ve lived a very checkered life and at my daughter Jackie’s suggestion, I have been writing it down. It’s in 14 chapters and I’ll eventually publish it as a print book or e-book. You can get a preview by going to my group Facebook page: https://www.facebook.com/groups/864738547728952/about

I once wrote a book about my travels with that rascal Murphy and here’s a chapter from the book showing some of his dastardly tricks: 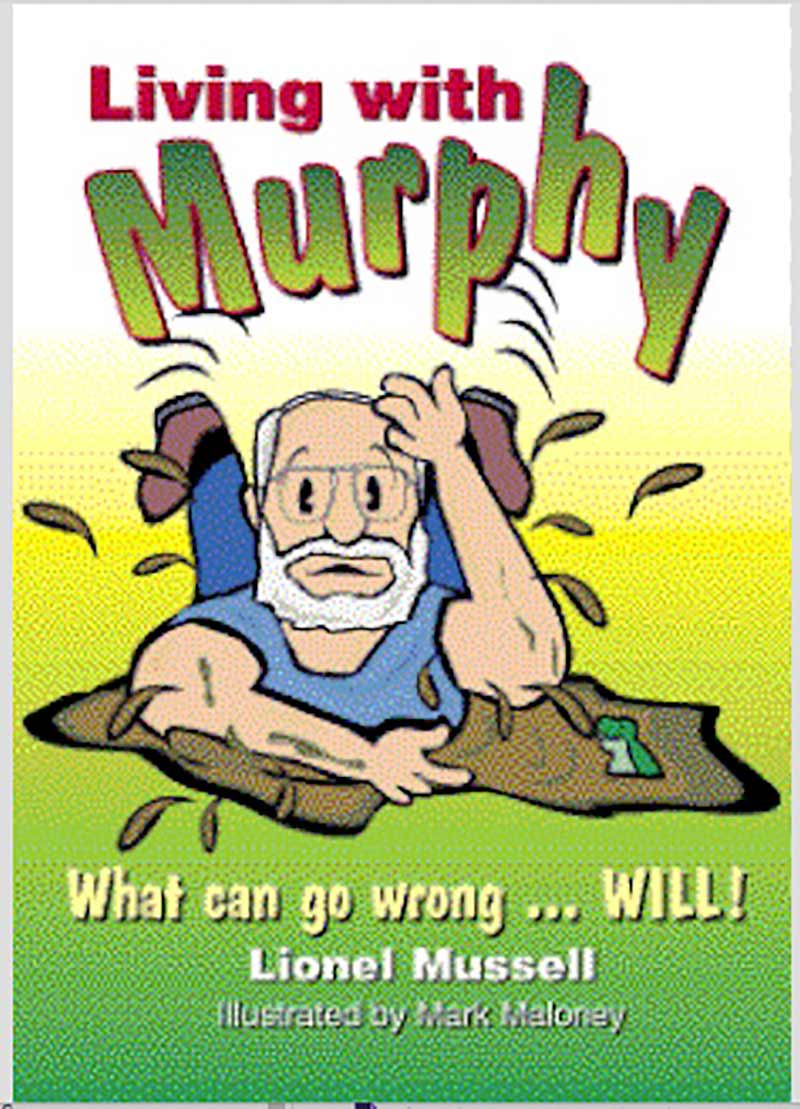 There are things we did together, Murphy and me, that I choose not to tell you about. Like why I hit a kerb late one night and punctured two tyres and then left a trumpet on the nature strip after taking it out of the boot to get to the spare wheel! And how we finished up on top of a heap of road metal with all four wheels suspended in the air at 2am one morning after a late night with Ernie Butler!

Which leads me to tell you about Ern. Those who knew him have a great assortment of stories about him and his exploits, often brought on by imbibing plenty of amber fluid but all outrageous and most of them true. I did a round-the-world trip with Ern so I have a few personal stories to add to the vast collection, but one thing that always emerges when people start to talk about him is that underneath the buffoon he chose to show to the world, there was a unique, caring and highly intelligent individual.
Our trip started out fairly well, with Ern and I keeping the hostesses busy bringing us cans of Fosters to help us through the long night as we winged our way towards Hawaii, where we found ourselves in a glorious high-rise hotel apartment overlooking the famous Waikiki Beach.

When we went out at night for a meal, Ern kept the American couple on the next table amused by his ‘ocker’ wit and they insisted on ‘shouting’ us large amounts of Budweiser so that by the time we staggered back to our room, Ern was not fully with it. I was very asleep when he put the light on and headed for the bathroom, babbling incoherently.

He babbled still more when he returned and eventually the light went off and peace settled again. The next morning I awoke to cries of, “Who did this?” as Ern surveyed the wreckage of the bedside lamp. It had an American-style rotary on/off switch that had beaten him during the night and he had dismantled the whole thing and removed the globe!
Our flight to San Francisco was delayed and we arrived there on a Saturday around midnight to find no one to meet us despite plenty of correspondence between Ernie and members of the 20/30 International organisation that was the US equivalent of Apex. We tried to phone the contact person who Ern believed lived in Chicago because the letters had carried ‘CHICO’ as their destination.

The phone books didn’t help. ­No one by that name lived in Chicago or the surrounding areas. We were eventually rescued by the people supposed to meet us.­ They had started the welcoming party without us and were in great form by the time they arrived at the carousel. ‘CHICO’ turned out to be a little Californian town near San Diego and had nothing to do with Chicago!

After a hectic and rather strange Sunday in San Francisco, we flew to Vancouver, spent time with the local Kin 40 members and the next day boarded a coach for Montreal with overnight stopovers at Revelstoke in the foothills of the Rockies and Calgary, home of the famous ‘Stampede’. With us on this part of the trip was Dennis,­ a boomerang-throwing champion back in Aussie, ­and his wife. During a mad tour with our Kin 40 hosts of all the hotels in the area, Dennis demonstrated his prowess with the boomerang but as the night wore on, the curved stick showed less and less inclination to return to sender.
We had a great time with the Canadians and all too soon we were on a British Airways flight to London where Murphy had preceded us. Ern was heading for friends for a few days and my plan was to pick up the hire car I’d booked before leaving Australia, staying with cousins in London over the weekend and then taking a few days to reach the World Council of Young Men’s Service Clubs convention in Edinburgh where I’d catch up with Ern again.

There was no desk for Kays Rent-a-Car! No-one had heard of them and the phone book had no entry for them, so I tried Avis and all the others. It was a universal chorus of, “Sorry, we are booked out. Try again after the weekend.”

Just a bit discouraged, I rang cousin Barb. and she arranged to meet me at the underground station near her home in north London. Struggling onto the train with my heavy cases and wearing a cowboy hat presented to me in Canada by the boys of Kin 40, I sweltered in London’s out-of-character heatwave and finally reached Tufnell Park Station, where I waited for ages outside the wrong entrance until I finally woke up to the idea that there just might be another exit.

On Monday, Murphy persuaded Avis that I needed to show my Australian driving licence before they would let me loose on British roads and, as I’d left it at home, I had to ring son Chris and get him to drop it into the Avis Melbourne office for them to fax the details through to the UK. This done, I was given the keys of a Vauxhall and sent off into the London rush hour, fortunately accompanied by Barb’s husband Steve who worked in the city and had arranged to meet me after work.
A few days later I had caught up with quite a few family members plus Derek and Barbara, old friends from RAF days, and spend the next weekend in York with some of Vi’s family before going on to Scotland for the convention.
Ern was popular wherever we went and it amazed me to find how many people from around the world knew him and corresponded with him. He was in fine form at the social evenings and one night, as we returned from a ‘ceilidh’ (a traditional Scottish or Irish gathering) on the top deck of a double-decker, he embarrassed everyone on board that knew him by asking the girl he was sitting with if she’d ever wondered what Scotsmen wore under their kilts and then lifted the kilt of the poor fellow sitting opposite!
A huge Indian member of Round Table, Jitty Singh, ­came with us as we drove back to London and his turban hit the roof every time we went over a bump. Jitty was from New Delhi but had friends who owned an Indian restaurant in London and we were invited to go there for lunch before flying to South Africa. The hot curry was mild compared to the ferocious chilli-based dish served as an entree.

“You’ve destroyed my taste buds!” I cried, to Jitty’s great amusement. I blamed Jitty for my streaming eyes and burning throat but I believe my mate Murphy would have had a hand in it!

He certainly had a hand in our SAA flight to Johannesburg that night,­ or it should have been that night but Murphy caused an engine problem that saw us sitting on the plane for hours while they tried to rectify the trouble.

They served us dinner and drinks and finally around midnight carted us off to a hotel where we endeavoured to get a few hours of sleep before the early call. Our luggage had stayed on board so I had to put on the same socks that I had worn the previous day and we finally got airborne well into the morning for the long haul down the coast of Africa. South African Airways were forbidden to overfly the African countries and had to take the long way round and this saw us arrive at Jo’burg just before midnight. Our message to Ern’s friends had not reached them and they had spent the entire day and evening at the airport.
By now the nylon socks were getting very high indeed but there was still a three-hour drive into the Transvaal before arriving at our host’s home and at last I was able to get those smelly things off my feet before we settled down to yarn while we munched on caviar and scrambled egg at 4am.

Oh Ern,­ I could write another book about you. Sadly, Ern developed a rare and particularly savage kind of bone cancer and he and his long-suffering partner, Jesse, bought a lovely home on a hill overlooking the estuary at Batemans Bay in New South Wales, were he spent his last few years as the cancer gradually overcame even his indomitable spirit. With a group of his friends, we scattered his ashes in the estuary at a spot he had nominated and even then his humour came to the fore. He had requested that his ashes be scattered there “because then I can come ashore twice a day for a beer when the tide comes in!”
Murphy kept his head down and it was a lovely sad/happy weekend until, on the way home, the approaching police car did a U-turn on a deserted stretch of the Princes Highway the other side of Orbost and I copped a speeding fine. 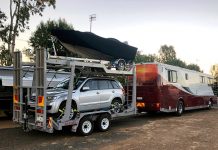 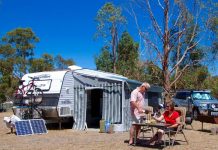