Here’s a question: do you like caravans that are large and luxurious, or compact and comfortable? Both have their advantages and, similarly, their drawbacks.

I fall into the latter category. I admire the big rigs on the road, but I view 17ft-20ft caravans as a more practical option.

The Hilltop Feathertop range, which in 17t 6in size configuration, is available in three layout variations, is a case in point. 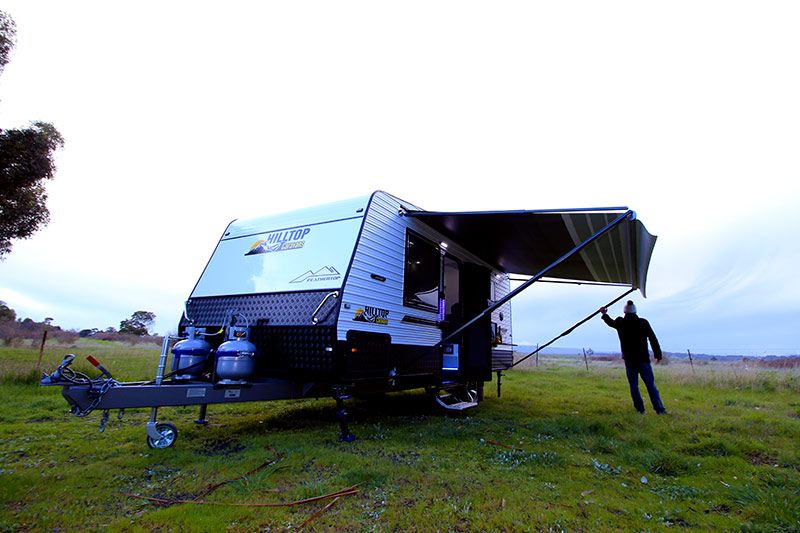 It looks smart and stylish, it’s nicely put together, and while it’s small ‘footprint’ on the road requires some compromises, they are trade-offs that I would happily make in light of the benefits such a van offers, chief among them their lighter weight, manoeuvrability and ease of towing.

The 17ft 6in Feathertop that we hitched for a shakedown run featured an L-shaped dinette, rear bathroom, offside kitchen and front bedroom. To be sure, it’s a familiar layout but overall, it works well. 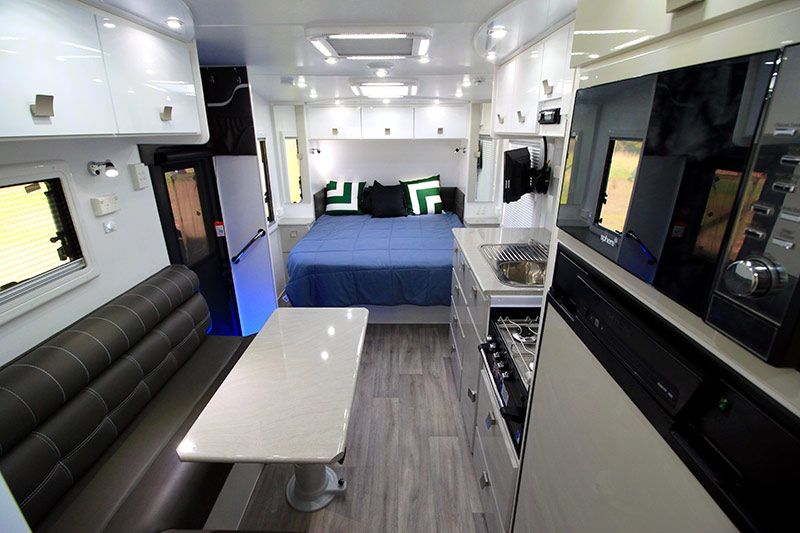 In the nose of the van, Hilltop has fitted a queen-size bed with overhead lockers, sizeable bedside wardrobes and reading lights. Despite the fact the tunnel boot occupies some of the under-bed storage space, there appears to be a decent amount of space here still.

At the foot of the bed on the offside, a swivel arm has been fitted for a TV. Thanks to the swivel arm, the telly could be watched from the bed or the dinette. 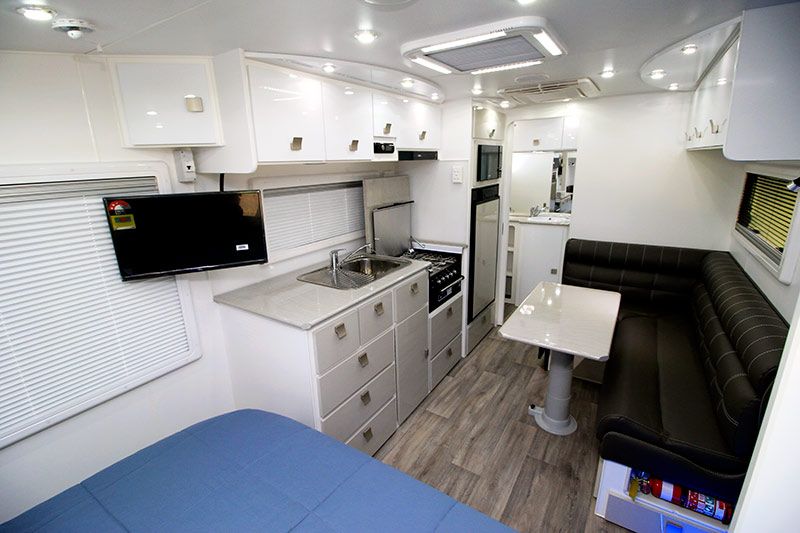 The kitchen incorporates a four-burner cooktop and griller. The customer of our review van, however, opted for a large drawer beneath the griller instead of the standard oven. A number of lockers are fitted above the kitchen bench, with the forward-most locker containing the various switches and controls, as well as the 12V fuse block and regulator for the roof-mounted 160W solar panel. 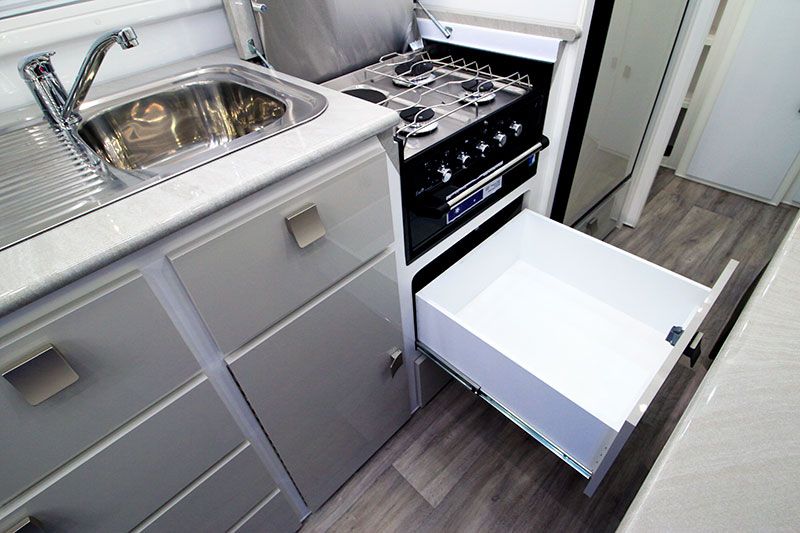 A 165L Thetford three-way fridge with microwave above is fitted between the kitchen and the bathroom, and let’s not forget the sound system mounted to the kitchen’s overhead cabinetry. The stereo is linked to two internal and two external speakers.

The dinette, opposite the kitchen, had optional leather upholstery. The best part, though, is the fact the table can easily be lowered to convert the dinette into a second bed. Simply use your foot to press the button at the base of the table leg and apply gentle downward pressure to the table. The table will lower into place, and then you can fit the supplied infill. Easy. 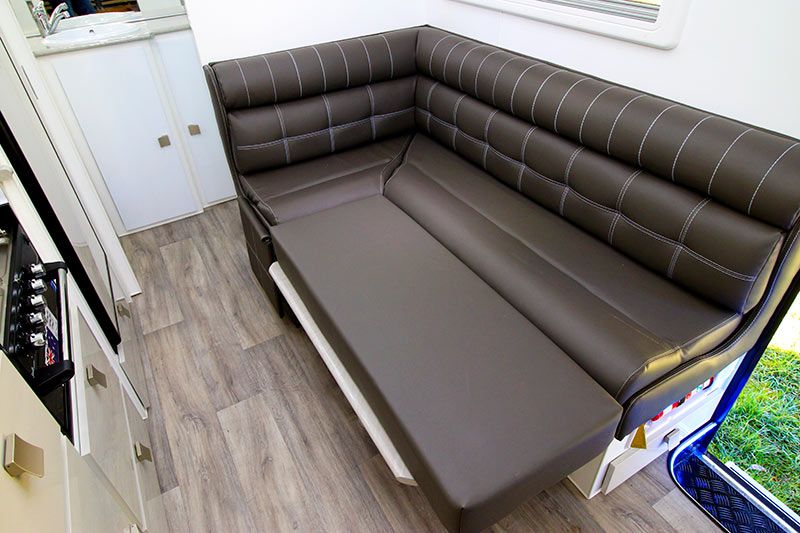 Perhaps the biggest trade-off with this Feathertop’s layout is the bathroom. It is very stylish and the fitout is of a high standard; however, it is small. This is, of course, a function of the compact nature of the van. And since you’ll only spend minutes of the day in the bathroom, it makes sense that the living quarters are prioritised over the bathroom in terms of space. 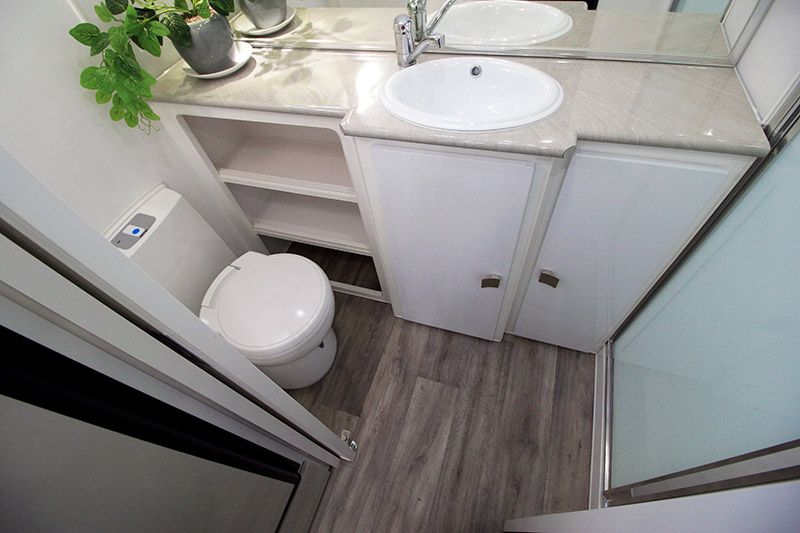 As you’d expect, a range of features are included in the Feathertop. Beyond the appealing fitout, which includes CNC-cut furniture, there’s an Ibis 3 reverse-cycle air-conditioner, LED downlights, and more.

OUTSIDE THE HILLTOP CARAVANS FEATHERTOP

The Feathertop rides on a 4in chassis with 2in raiser and a 4in drawbar; however, our review van had an optional 6in drawbar. 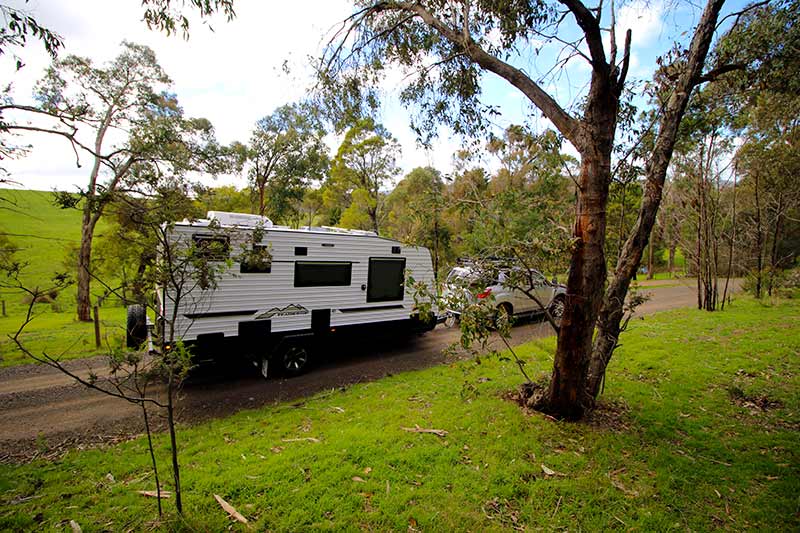 It uses conventional meranti timber for its frame, which is clad with ribbed aluminium on the sides and smooth composite aluminium cladding at the front and rear, not to mention a smattering of black checkerplate all around.

Safety features include a reversing camera and optional Dexter sway control (which was fitted to our van). Interestingly, Hilltop has used Dexter Torflex independent suspension on this Feathertop, though it’s not really an offroad van. Having said that, I see no reason it couldn’t happily travel gravel and bush tracks, within reason.

A gal-lined tunnel boot, with internal light, is fitted at the front in lieu of a front boot, which makes sense since a front boot would only add to the overall length of the van.

Water-wise, the Feathertop has two 95L water tanks – enough for a week or so off town water if you’re frugal with the shower – and there’s even a 110L grey water tank. 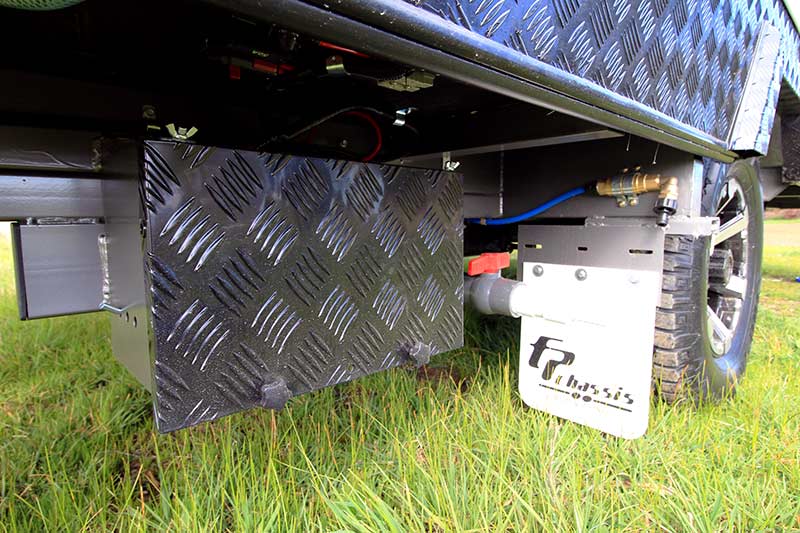 To the offside chassis rail, Hilltop has mounted a single 120Ah deep-cycle battery behind a checkerplate guard, while on the nearside near the tunnel boot, there’s a gas bayonet.

Mounted to the drawbar are two 9kg gas cylinders, with the gas regulator protected by a piece of specially-shaped checkerplate. Speaking of protection, I was glad to see the freshwater tap on the offside of the A-frame also had a stoneguard.

The town water inlet is mounted high on a chassis rail, out of harm’s way, though I reckon a little extra protection for the grey water outlet wouldn’t go astray. 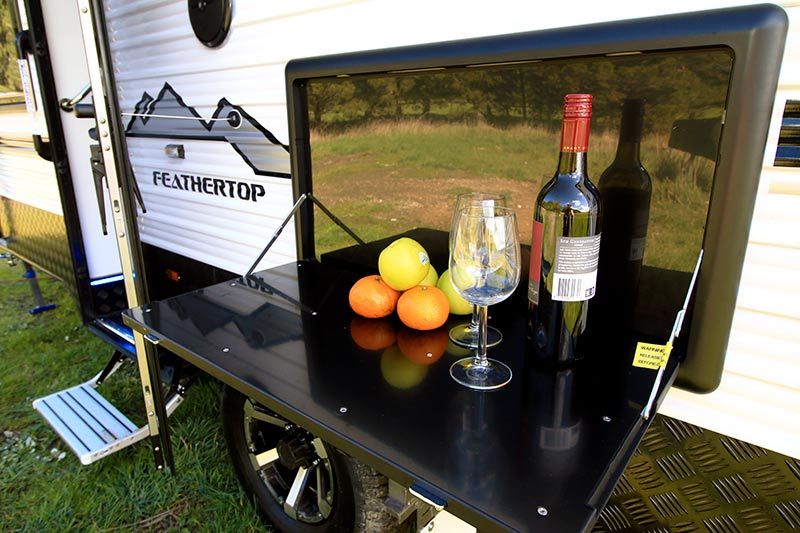 Our Feathertop weighed 2060kg Tare, with an ATM of 2690kg, providing a payload capacity of 630kg. It’s unladen ball weight was 180kg. Under tow, on both secondary roads and the open highway at 100km/h, the Feathertop presented no issues to report. It was smooth towing all the way.

Given its reasonably light weight, the single-axle 17ft 6in Feathertop is an attractive proposition for owners of mid-size 4WDs. In order to make use of the entire payload capacity, the 2500kg-rated Prado, among others, won’t work for this van, but there are plenty of tow tugs, such as the Pajero Sport and Ford Everest that would prove more than capable.

Though it doesn’t come with all the bells and whistles, at its price point of approximately $55,000 (from Sundowner RV, Vic), the Hilltop Caravans Feathertop is quite an enticing proposition. It contains all of the features you’re likely to need, nothing you won’t, and is finished off quite nicely.

Chassis: 4in main members, 2in raiser, optional 6in A-frame