A couple of years ago, EzyTrail made waves with the release of its EzyTrail Parkes 15, an offroad hybrid pop-top with a rear fold-out bed.

And after months of research and development, including thousands of kilometres of offroad testing in the Red Centre, the company has just launched the next-generation of this well-regarded van.

We were offered the exclusive first look at the Parkes 15 MkII and wasted no time hitching it up and taking it for a test tow in the bush.

The original EzyTrail Parkes 15 was a good van; however, the company has raised the bar with this second iteration. The fit and finish throughout is much more refined, the suspension has been upgraded, and the layout includes more sensible features. 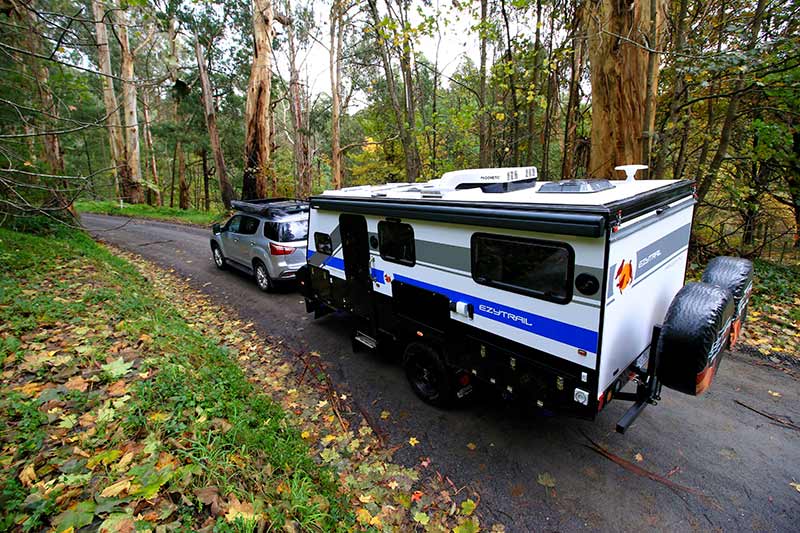 EzyTrail was established about 13 years ago. These vans are built in China to Australian specifications, and the company, which has a sprawling factory of its own in Bayswater, Vic, does not shy away from this fact. It has, however, developed a decent reputation among Australian RVers. In fact, EzyTrail was the first manufacturer/importer of campers built in China to be accepted into the Victorian Caravan Industry Association, since it carries out a certain amount of its manufacturing locally.

The EzyTrail Parkes 15 MkII rides on a 4in galvanised RHS chassis, with a 6in drawbar. Up front, it sports an offroad ball coupling, an Ark XO jockey wheel (rated to 750kg!), and a large storage box comprised of three separate storage compartments, two of which are for gas cylinders. 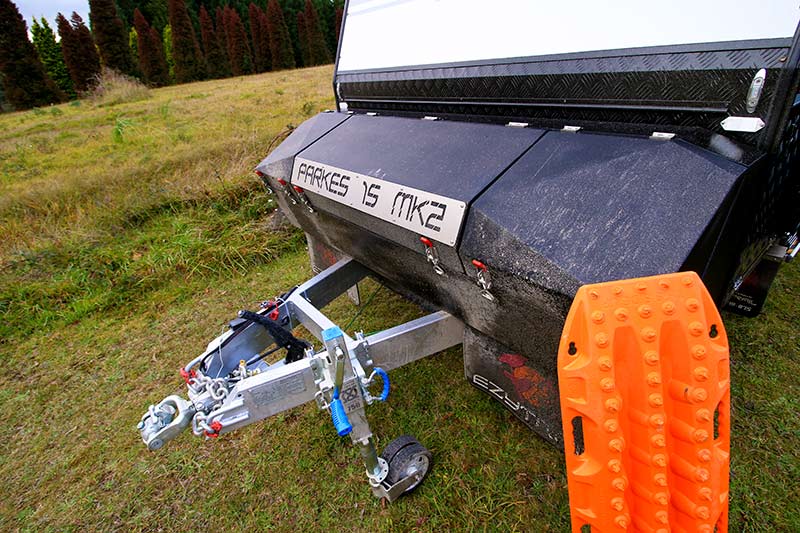 The upgraded suspension is a key change for the new EzyTrail Parkes 15. Engineered in conjunction with a well-known Australian suspension manufacturer, the ‘Ezy-Rider’ independent coil system found on this van incorporates two shock absorbers per wheel mounted vertically, rather than at an angle. The system performed admirably as I hauled this van over various undulations.

In fact, the van towed almost flawlessly behind my MU-X. Minimal pitching, no sideways movement or body roll. From a towing perspective, it seems to well and truly have its act together. 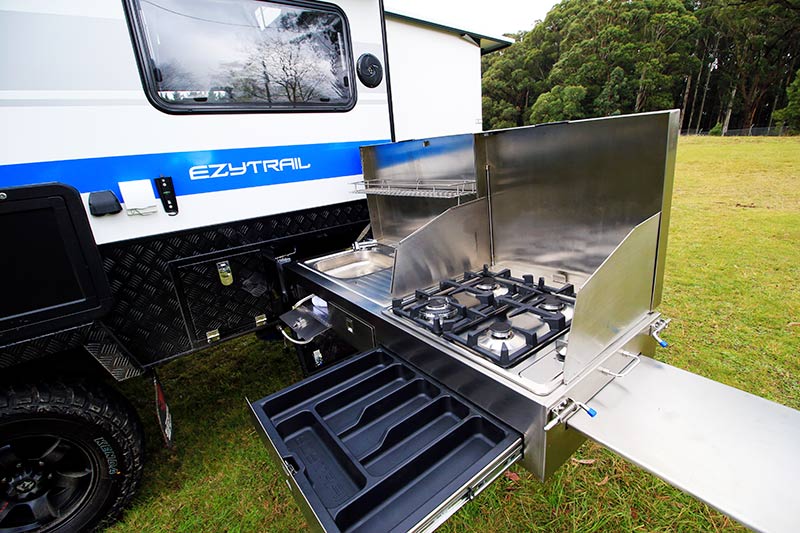 The rear slide-out stainless steel kitchen, which includes a four-burner cooktop, sink, a cutlery drawer and extendable bench, has also received a key upgrade: it is now permanently plumbed to the van’s water supply (two 120L poly water tanks protected by checkerplate) via special ‘cable tracks’. This means that you only need to connect the gas when cooking outside. Brilliant.

Towards the front, EzyTrail has fitted a slide-out tray to accommodate a portable fridge, and has sensibly included a 12V point and even an Anderson plug within the cavity to power the fridge off the van – three 100Ah deep-cycle batteries and 30A charger are standard. Our van was also fitted a few solar panels. 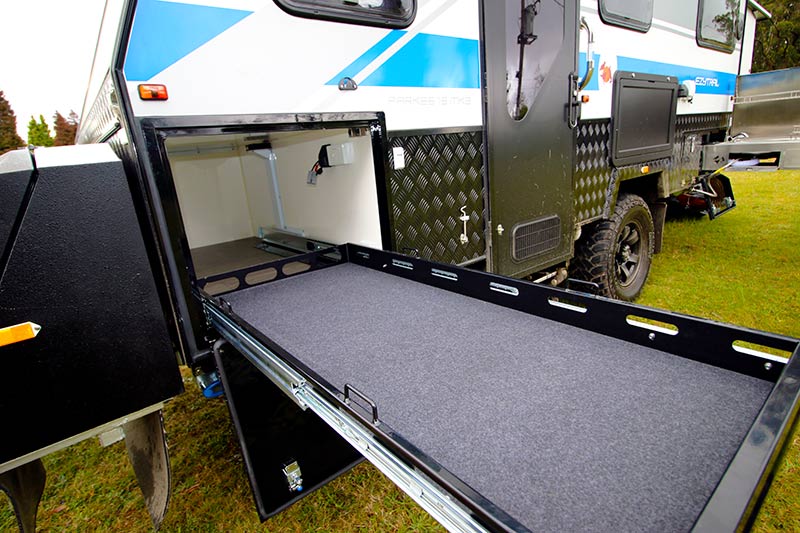 A generator tray has been fitted to the offside, and there are some other external storage nooks provided as well. In fact, the revisions to the EzyTrail Parkes 15 have resulted in more storage outside the van than inside.

There are, naturally, plenty of other features on offer, such as a fold-down picnic table, and external speakers, 12V and 240V powerpoints. Like all good hybrids, the Parkes 15 has an emphasis on outdoor living and is equipped accordingly.

SETTING UP THE EZYTRAIL PARKES 15

Setting up of the MkII is much the same as the first iteration. First, pop the roof in the usual way. 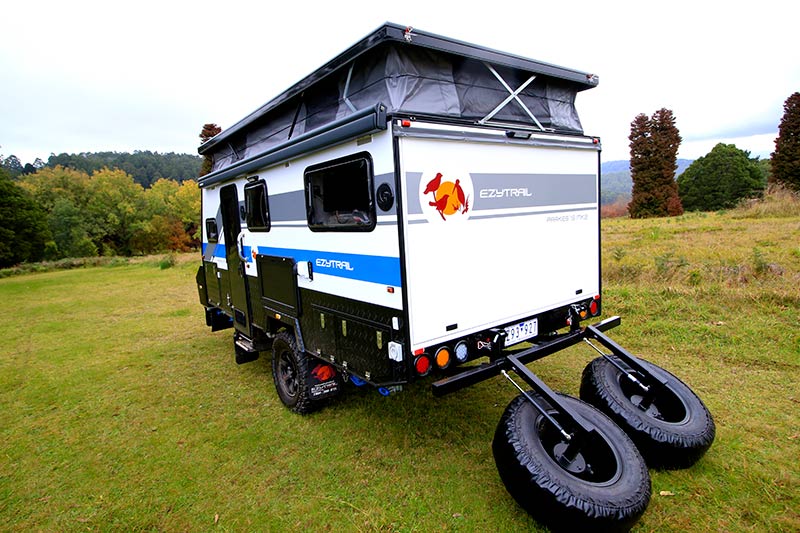 Then, the dual spare wheels (on individual wheel carriers) need to be lowered (they are retained by catches and a hitch pin each), and then you can unclasp the rear wall. This wall automatically lifts to become the roof of the rear bedroom. 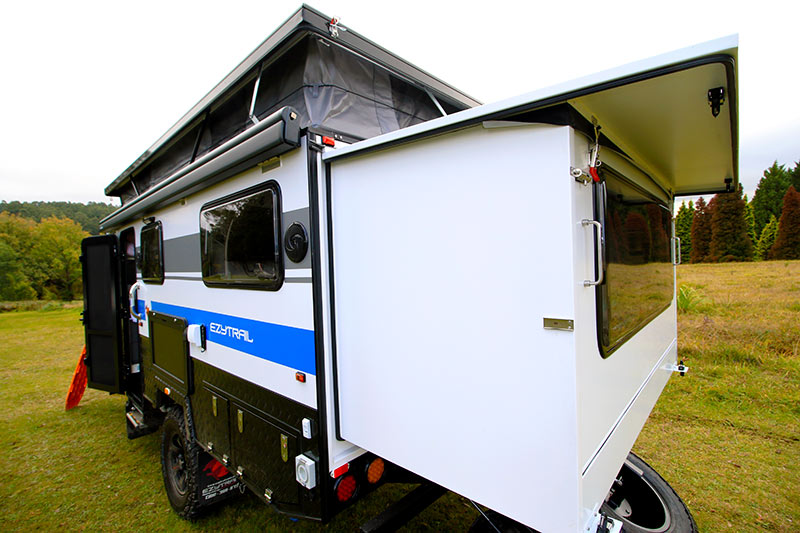 A couple of walls swing out, the floor lowers, and it all locks together very simply. Notably, EzyTrail has improved the seals on this bedroom and I immediately noticed that the walls felt more ‘substantial’ than those on the original van.

This is because, unlike on the EzyTrail Parkes MkI, the walls are insulated composite aluminium, much like the rest of the van.

Inside, the ‘split’ mattress, most of which sits vertically when the van is packed up, needs to be folded into position. The rear window has been repositioned in this van, allowing the pillows on the bed to sit right against the rear wall. 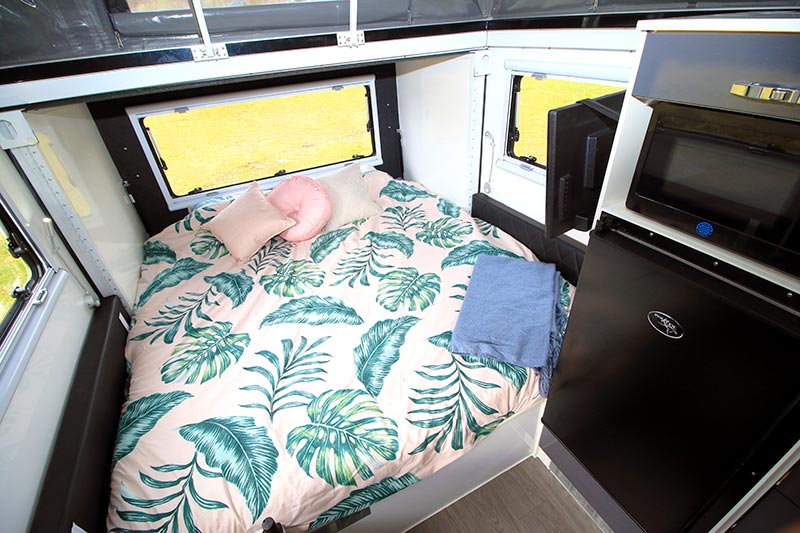 The entire process shouldn’t take more than five minutes and the design appears to have been well-executed in the Parkes 15.

The inclusion of a small kitchen is one of the main changes found inside. This has necessitated a few major layout changes. The former L-shaped lounge has been removed to make room for the kitchen and optional 12V EvaKool fridge and microwave.

The large offside storage cabinet found on the first Parkes 15 has been replaced by a two-seater lounge with swivel table. 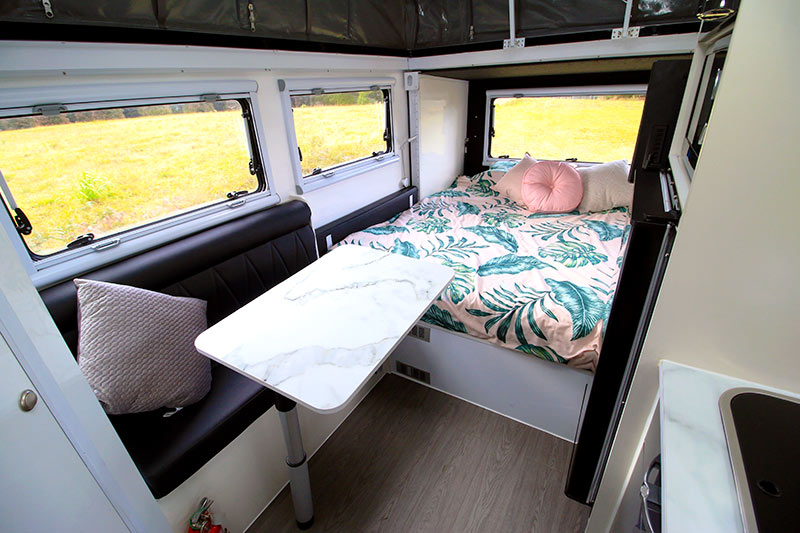 Across the front of the van, you’ll still find two bunks; however, EzyTrail has found a clever way to increase the width of the top bunk by 100mm: changing the angle of the van’s front profile.

Finally, the bathroom is particularly spacious. It includes a cassette toilet, a washbasin with cabinet below, and even a mirror. It is, in fact, one of the largest combo bathrooms I’ve seen in a long time, and I loved the decorative panel given to the shower, particularly the cutout with blue nightlight behind. 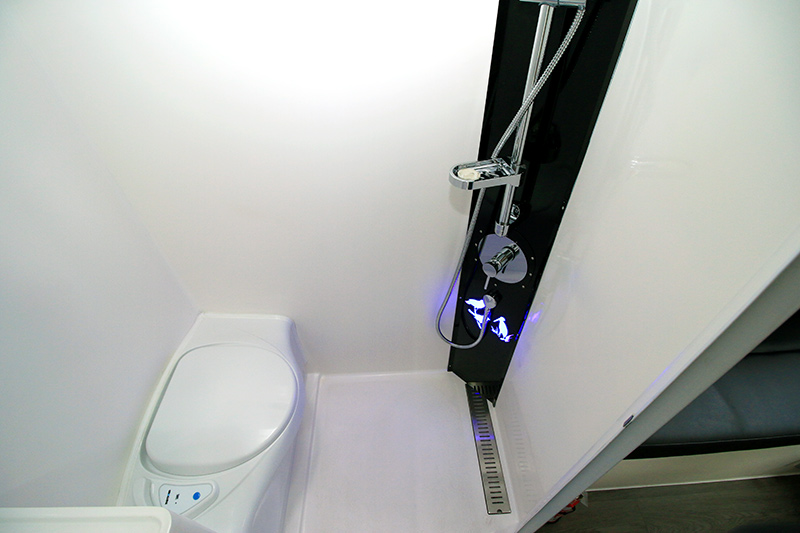 Further, EzyTrail has also included a chrome strip drain (very modern). Being a one-piece unit, there is a lot less silicone used in the bathroom, unlike in the Parkes 15 MkI. The result is much more pleasing.

Of course, there are plenty of other features on offer in this van, from an array of 12V and 240V powerpoints, to a stereo system, a 24in TV, and (optional) reverse-cycle air-conditioner. 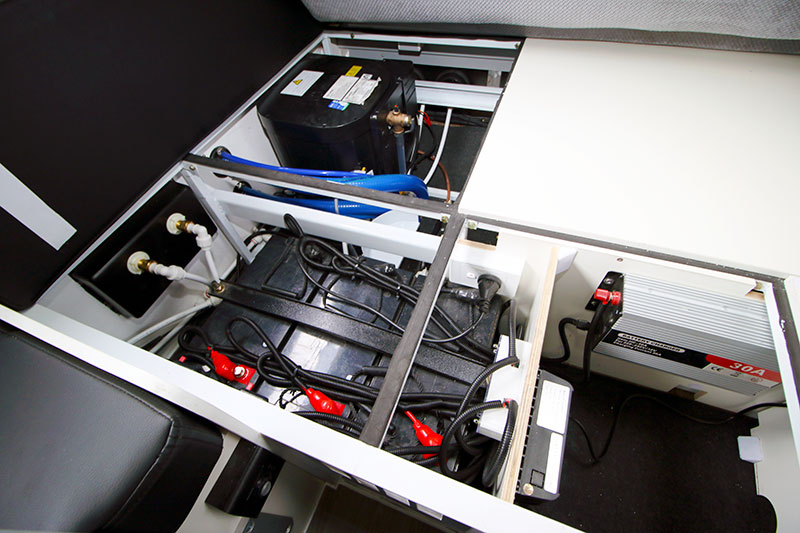 Lift the mattress and you’ll find laminated panels that provide access to the batteries and Truma hot water heater. The fact these panels were properly finished, rather than left as uncoated ply, also pointed to the van’s sense of refinement.

I also particularly liked that the 12V wiring runs behind some aluminium extrusion known as a ‘trunk’. The wiring can therefore be easily accessed for fault-finding, etc.

During my time with this van, I developed the opinion that it was quite a robust unit. A number of layout variants are available, too, including a two-berth model. Because this layout (known as the Quad) accommodates so many features – large bathroom, bunks and even an internal kitchen – internal storage options are in short supply. Other layouts may offer more. 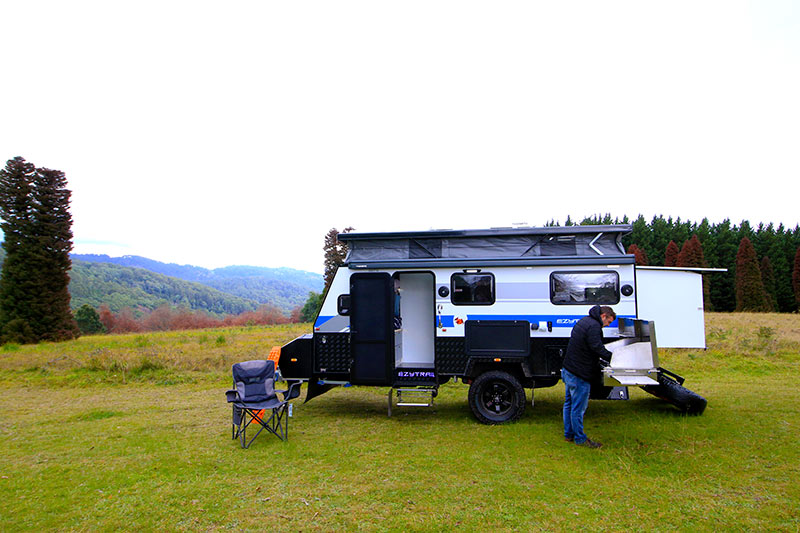 However, there are numerous benefits to consider. Being a 15-footer, it should be easy to store and it is certainly easy to tow along tight tracks.

For its price point, it really is an attractive option in the hybrid market.

Chassis: 4in galvanised with 6in drawbar