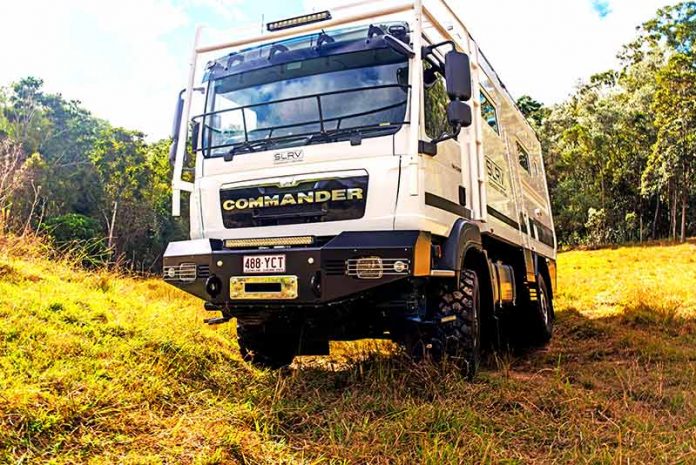 You know how it goes, the bleary-eyed dream of exploring the green forests, rugged coastlines and inhospitable wilderness in deepest, darkest Africa.

Although it’s not quite everyone’s thing, one traveller commissioned Gold Coast caravan and motorhome manufacturer SLRV to build him a vehicle capable of roaming through the most remote, challenging and most beautiful spots of the African wilderness.

Given this was the task, I wanted to see if this rig is really an absolute boss, a true commander, a master of the global roaming set. 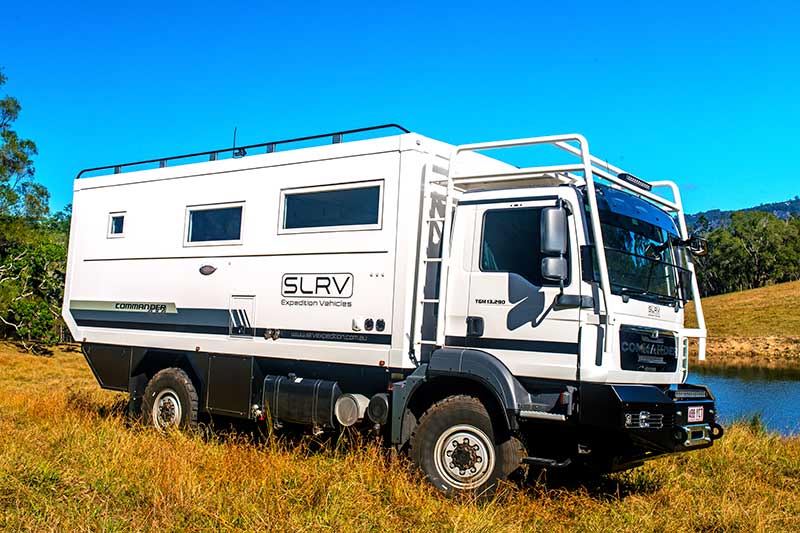 Unfortunately, without being able to go bush-bashing on the golden-hued African savannah, Tanzania’s Serengeti or the Kalahari Desert, we took it to a special location in the Gold Coast hinterland, green, lush and pastoral to see if it was up to the task.

If it’s sheer mechanical grunt you’re looking for, the Commander has it in spades. It’s an all-wheel-drive TGM 13.290 MAN cab-chassis with rear air suspension and a 13,000kg GVM. It produces so much torque and power that there’s no doubt it’ll take you over or through just about anything. On this score, the SLRV machine is definitely a commander.

The SLRV has a lot going for it, including 600L fuel tanks and 385/80 Michelin tyres with military-spec rims. This alone means plenty of diesel to motor through the wilderness and the sort of rims and tyres that won’t let you down. 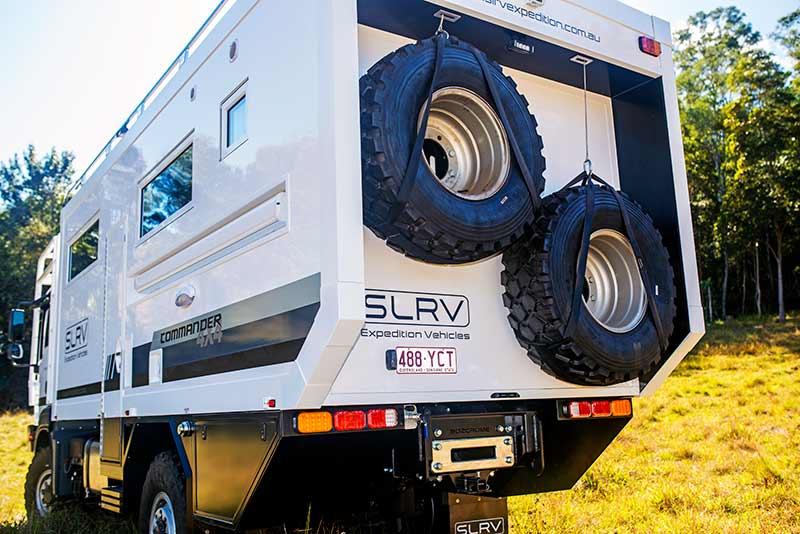 Touring the Serengeti needs plenty of fuel, an engine with chutzpah and plenty of water with 600L on board. What’s more, it’s creek and river pump let’s you draw water from any suitable water source.

A SLRV bash guard and sump guard helps protect the rig while a SLRV rear winch means you’re certainly unlikely to find yourself stuck in the mud. The SLRV tailer-made bull-bar also houses the truck’s front winch, but unfortunately the winch wasn’t fitted when we played with the truck.

When it comes to overcoming rough terrain, this rig sports a three-point torsion-free chassis that means when the chassis rails twist, the fixed centre mounting holds the body in the middle while the front and rear mountings rotate, transmitting the force harmlessly away from the motorhome frame, keeping it stable and allowing the chassis to twist freely beneath, improving the offroad capability of the entire rig. 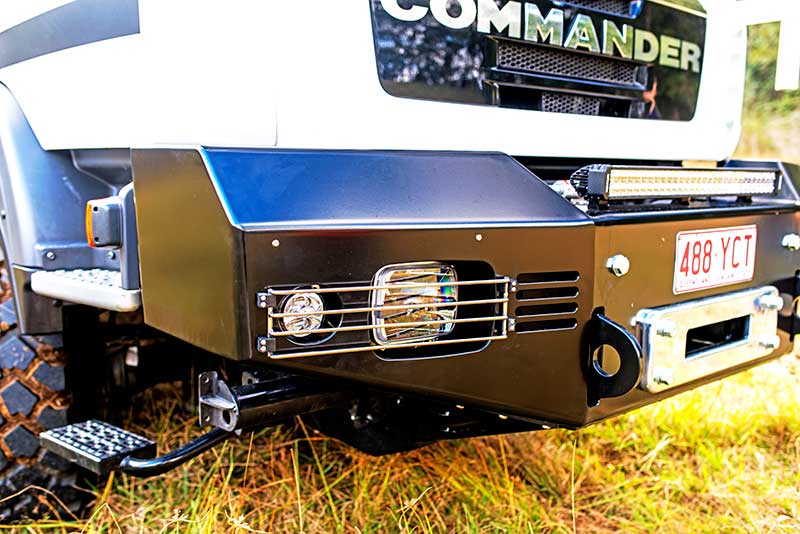 A built-in ladder behind the driver’s cabin provides access to a useful roof-rack that allows a little extra storage (perhaps for an independent tent, swag rolls or other bulky kit). This rack could easily double as a rooftop sundeck for more adventurous spirits. Unfortunately, the exterior barbecue wasn’t fitted, either.

You’re likely to want to kick back in comfort and that means retiring to the interior. I lowered the electronic steps and ventured inside.

The SLRV Commander had all the fundamentals of comfortable travel sorted. A hydraulic drop-down king-sized bed, a large dinette that has the ability to transform into a second king-sized bunk, more storage space than your likely to need, and a quality, if not slightly-too-small, ensuite and ducted heating were some of the parts that added to an equation that equalled indoor comfort. 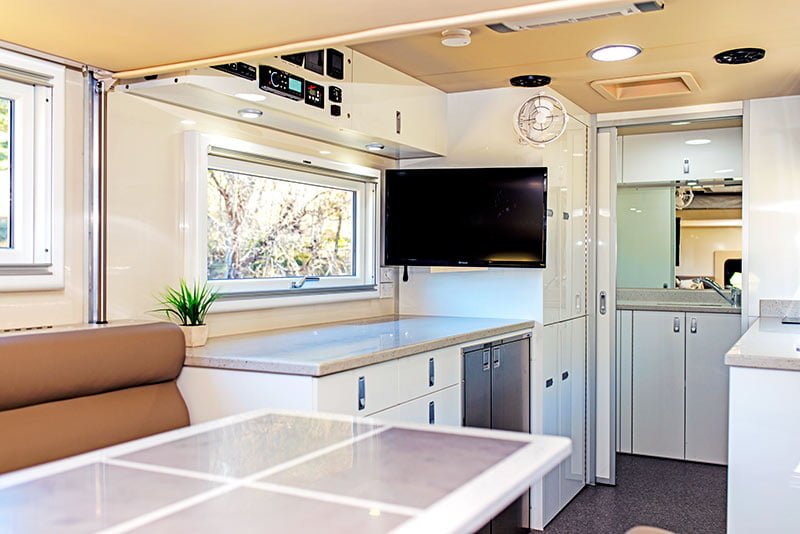 Out front, air ride seats make driving an excellent experience and, once in the seat, the vision is superb.

A crawl space from the cabin to the living area means not necessarily needing to step outside in order to enter the living space. Although, for my money, the crawl space is for the most part just a handy link between the adults up front and the kids who might be riding in the back. And that’s a positive thing – seat belts in the dinette mean you can load a couple of kids into the living space while motoring along a bush track. More importantly, it means that there’s the opportunity for a quick getaway in an emergency. 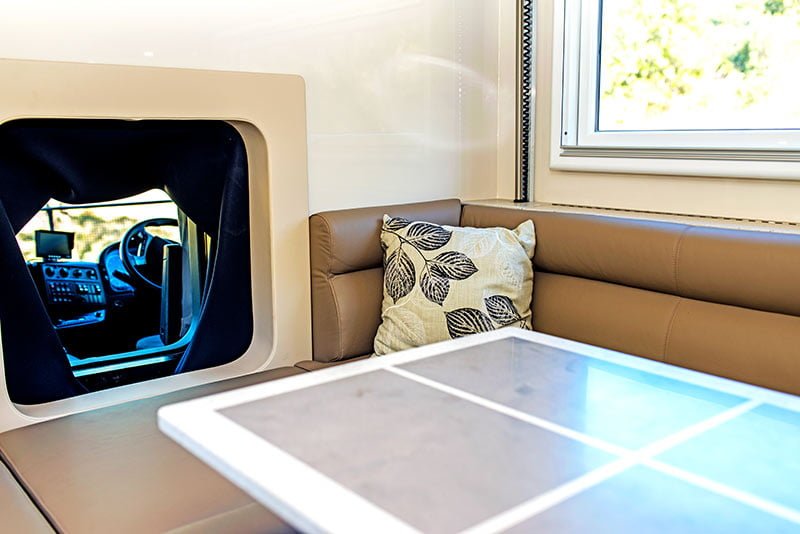 Beyond the crawl space, a large U-shaped dinette means there’s heaps of space for a sumptuous meal without needing to worry about rubbing elbows. The dinette has small storage spaces behind the seats and in the deck.

Drop the large table and you have space for another bunk bed, large enough for two adults or two or three kids. The main king-sized bed descends via an electronic lift. The dinette also houses a fridge-freezer by the entry door.

On the downside, the adventurous gourmet might struggle a little in the Commander’s kitchen. It’s clear that the client who commissioned this vehicle really doesn’t have a hankering for cooking much beyond heating beans in the microwave or boiling a spud or two on the diesel cooktop. 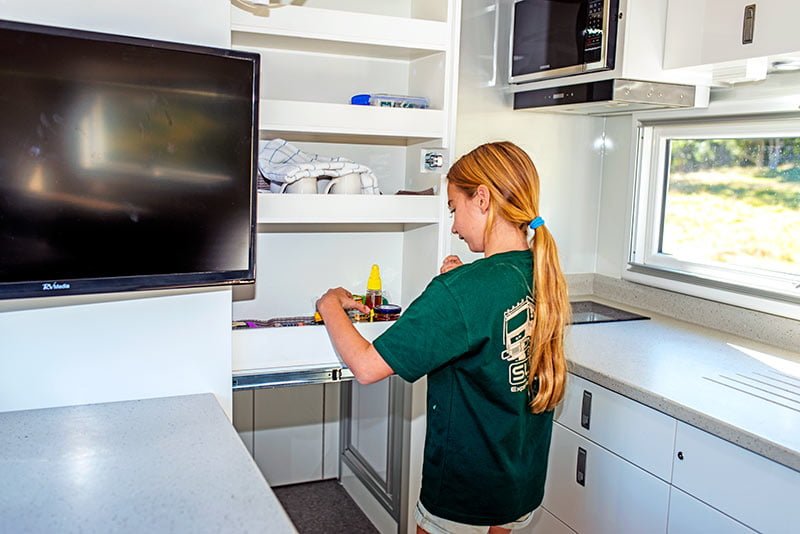 On the upside, a quality pantry and a sizeable under-bench fridge-freezer, together with ample kitchen storage and overhead lockers, mean you’re never short of somewhere to store your bits and pieces.

This SLRV has a good blend of ‘toys’, including a Fusion Marine entertainment system that includes a DVD player, an iPod dock, four speakers together with a four-channel amplifier, and a powered sub-woofer. All of this means all the music you need if you’re not relaxing in front of the 32in satellite television.

A lithium battery system and six 150W solar panels provide ample power for the entire rig and all the utilities.

SLRV has long made quality global roaming motorhomes and caravans and this rig is no exception. This go-anywhere vehicle may not be quite right for everyone, but that’s okay as all SLRV trucks are completely custom-built to suit the buyer. 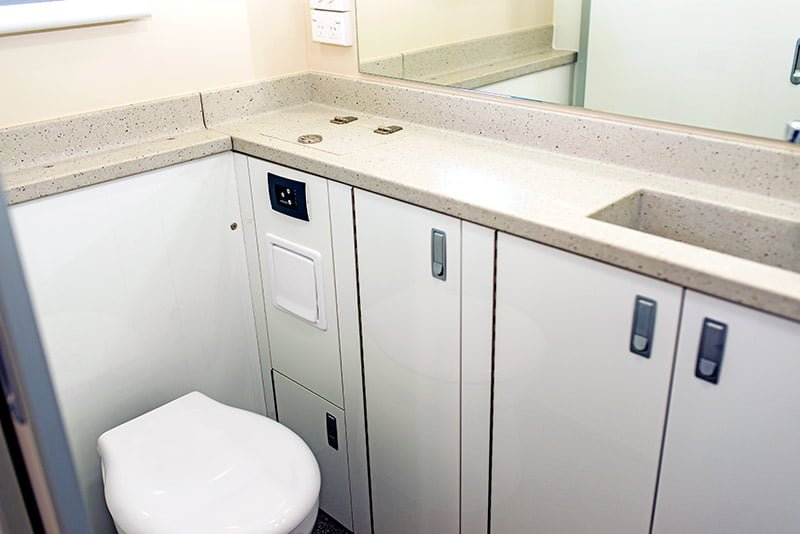 If your budget will stretch to a global roaming adventure, then SLRV has again proved worthy of consideration.

Gas: 2x9kg – stored in barbecue hatch (not plumbed in)

Fully customised – everything is optional