A family caravan needs at least three things: a bed for mum and dad, bunks for the kids, and a separate bathroom. Assuming the van also has a well-made chassis, suitable suspension and adequate body construction, you’ve got a van that should provide years of family adventures.

The Leader Caravans Gold LE – the Leader range is built by Supreme Caravans – has these bases covered, and more. Further, it’s priced quite fairly. 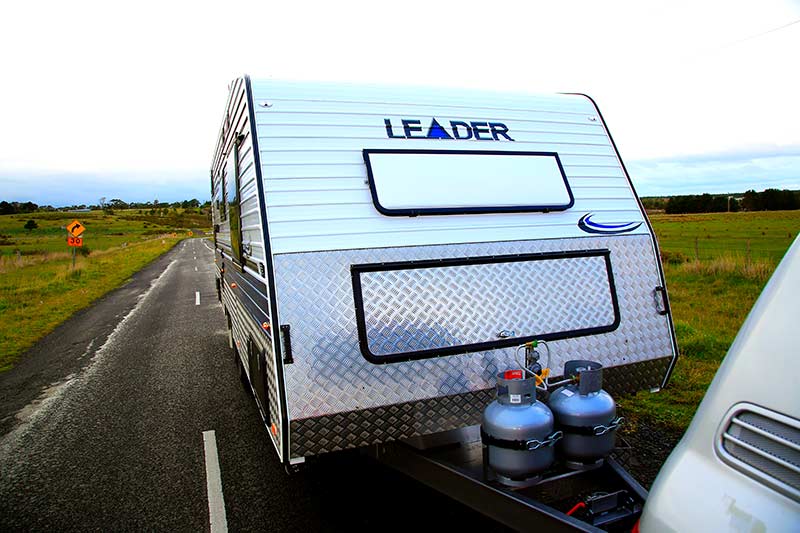 The ‘LE’ (Limited Edition) in the van’s moniker refers to the fact the company has packaged its standard Gold van with the features that previous customers were asking for. And so, on a mid-winter Melbourne day, we hitched it up at the Supreme showroom in Craigieburn to a 100 Series Land Cruiser and hit the road.

INSIDE THE LEADER CARAVANS GOLD LE

The cross-winds were ferocious as we headed to Seymour Holiday Park, a beautiful spot on the Goulburn River, about 70km north of Supreme Caravans. We towed the Leader Caravans Gold LE without a weight distribution hitch – it was just straight on the towball – and the van remained quite well planted to the road as it was buffeted by the wind. Towing between 85 and 100km/h, depending on the conditions, we experienced no real sway to speak of. 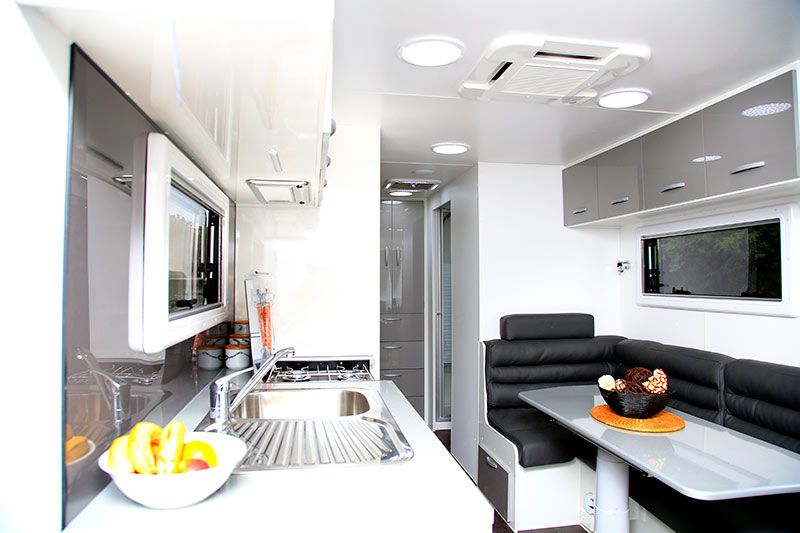 We unhitched at the holiday park, and as the kids and their mother played by the river, I stepped inside the van. It has an open layout, with the main bed in the nose of the van, the dinette amidships, on the nearside, the kitchen opposite, and the kids’ room in the rear. Two bunks are built into the offside (three bunks can be fitted as well, I’m told), while the separate bathroom fills out the rear nearside, with a tall cupboard fitted between the bunks and bathroom.

Each bunk has its own reading light, dual 12V powerpoint and a 240V powerpoint, so the kids can keep their gaming devices charged while they play in bed, and mum and dad can enjoy some quiet time. 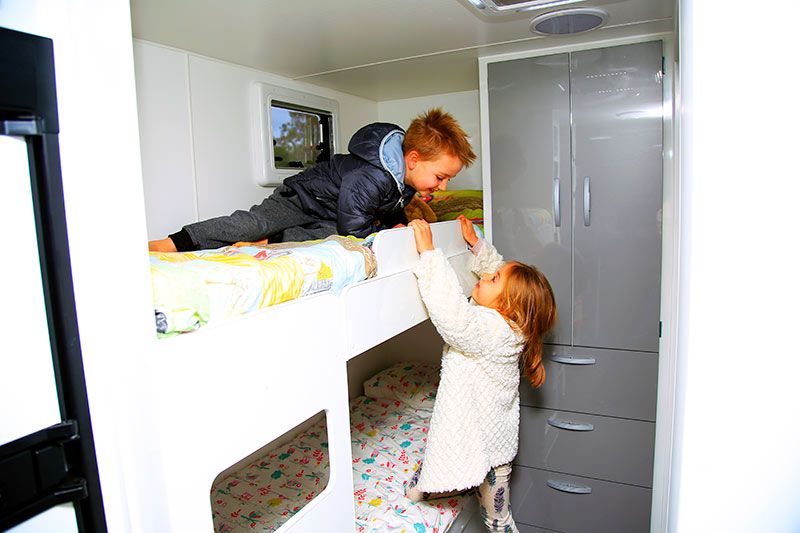 The cupboard consists of two wardrobes and four drawers below – seemingly a decent amount of space for the kids’ clothes.

The bathroom, meanwhile, is the full monty. It has a cassette toilet, a washbasin with storage, and a separate moulded-fibreglass shower. The shower incorporates a ventilation hatch and hand-held shower rose.

Now, the kids’ bedroom doesn’t have a separate door; however, I’m told that a concertina screen or curtain can be fitted. 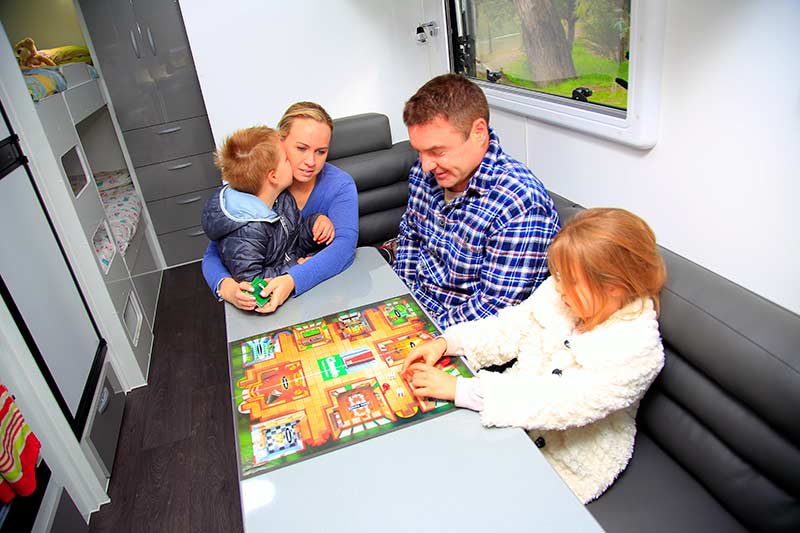 The dinette easily seats two adults and two kids and it’s quite comfortable. Two reading lights are fitted here, along with a multi-directional table.

The kitchen, meanwhile, is fitted with a 184L Thetford three-way fridge, a Swift four-burner cooktop with griller and oven, and a stainless steel sink. Fresh water is supplied from the onboard tanks by a Shurflo 12V pump.

The chef of the caravan would probably have to use the large dinette table for meal preparation, as the kitchen bench space is on the small side; however, when the cooktop is not in use, its glass lid would make a handy work space.

Kitchen storage space is adequate, with an assortment of cupboards, drawer and overhead lockers. I appreciated that the regulator for the van’s solar panels, as well as the Axis Bluetooth-enabled sound system, water pump switch, and the separate gas/electric switches for the hot water service, were centralised in an overhead locker, next to the microwave. Much better to have them hidden in a cupboard than mounted to, say, the splashback. 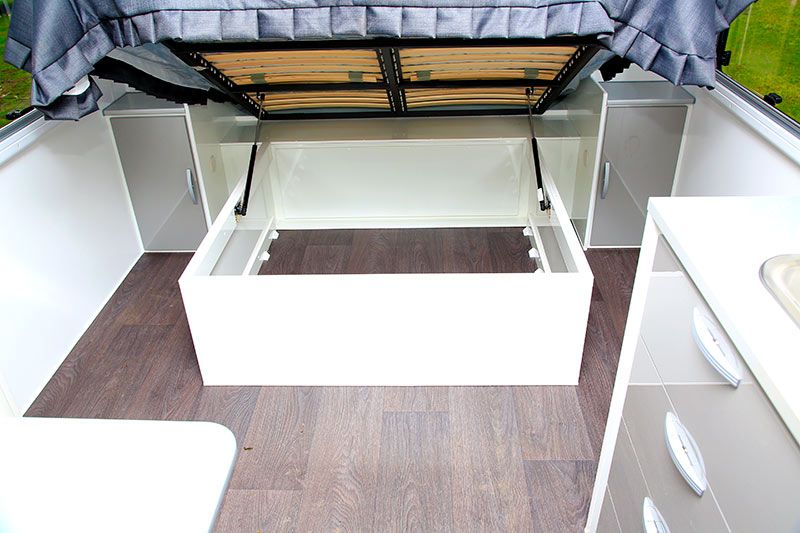 Finally, mum and dad’s room. The queen-size bed is surrounded by overhead lockers and wardrobes either side. Factor in the underbed storage compartment – the bed base lifts on gas struts – and you’ve got plenty of room for your gear. However, it’s worth noting that the hot water service takes up some of the space in the offside wardrobe.

On a related note, anyone could appreciate the fact that each wardrobe gets a 240V and 12V powerpoint, accessible through wardrobe cutouts. These ‘nooks’ are nothing new, but they are a great idea.

Among the other internal features of the Leader Gold LE are an Aircommand Ibis reverse-cycle air-conditioner and provision for a flatscreen TV (swivel arm provided only). Overall, the interior seems well and truly suitable for a family of four, but I’d consider fitting a screen between the main cabin and kids’ room. Everyone needs a little privacy, after all.

The Leader Caravans Gold LE is not an offroad caravan. It’s intended for blacktop adventures with the family, graded gravel tracks and the like, not for conquering Cape York. It has a meranti timber frame and ribbed aluminium cladding, roller-rocker suspension and a PermaGal chassis. It’s not the lightest family van on the block, but nor is it the heaviest, and I think its 500kg payload capacity is about right.

Up front is a 50mm ball coupling, a centre-mounted jockey wheel, a 12-pin and Anderson plug, and the plug for the reversing camera. Two 9kg gas cylinders are supplied as standard, too, and the drawbar also has a freshwater tap with its own checkerplate stoneshield. Checkerplate also adorns the sides and front of the van. 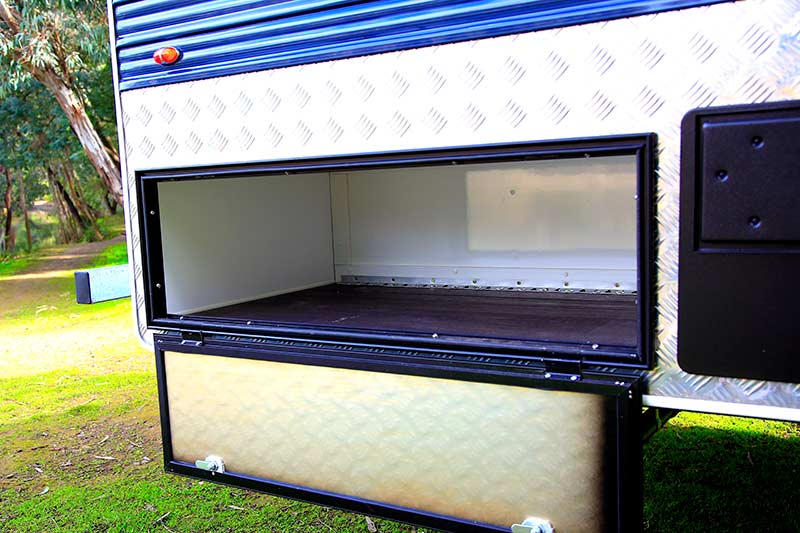 Now, there’s no fancy drawbar-mounted toolbox; however, external storage remains a highlight of this van. There’s a traditional front boot, a tunnel boot, and a storage bin at the offside rear.

On the nearside, you’ll find a picnic table, a Dometic roll-out awning, an ‘entertainment locker’ with a TV swivel arm, antenna point, etc., a 12V point, an awning light, and a couple of speakers. At the rear, the spare wheel is mounted to the four-stay bumper.

The van is also equipped with an external shower and a guard for the front window – a must, in my opinion. Yes, I’ve chipped more than one unprotected caravan window in my time.

As a family man, I reckon there’s nothing better than loading up the kids and getting away. And I know from (bitter) experience that attempting a family trip without the right van makes it much more difficult.

That’s why the Leader Caravans Gold LE appealed to me. It has a family-friendly layout and a number of touches, such as strategically-positioned 12V points and that sliding bathroom door, that should make all the difference.

At $64,990, it’s not a ‘budget’ van; rather, it’s a mid-priced family tourer with the right equipment for long trips.