It had been many years since I’d had a look at one of the campers by Victoria-based Star Vision. The company started out selling forward and rear-fold camper trailers but has since progressed to building a range of hybrid campers, such as the CX3 Pro that we hitched up in early April. 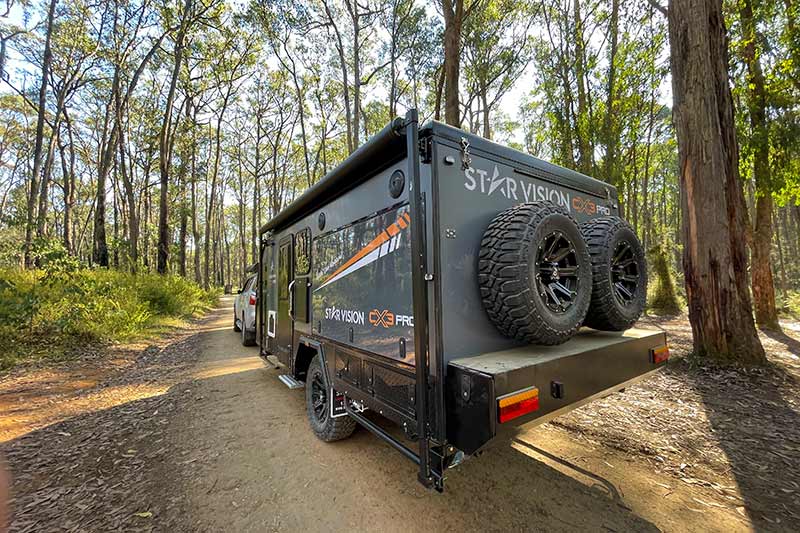 The Star Vision range is mostly built overseas but the vans are finished off here in Australia. This CX3 Pro is a 15-footer that does things differently to similar rigs in its class. Let’s go through it.

SETTING UP THE STAR VISION

The CX3 Pro has plenty of wow factor. The first thing you’ll notice is the kitchen built into the nearside. Rather than being fitted with a typical slide-out kitchen, a cooktop, sink, cupboards and drawers have been recessed into the side. It’s just a matter of undoing the catches on the lid and letting it lift on its gas struts. Features such as this are rare on such diminutive single-axle rigs – and I liked it. 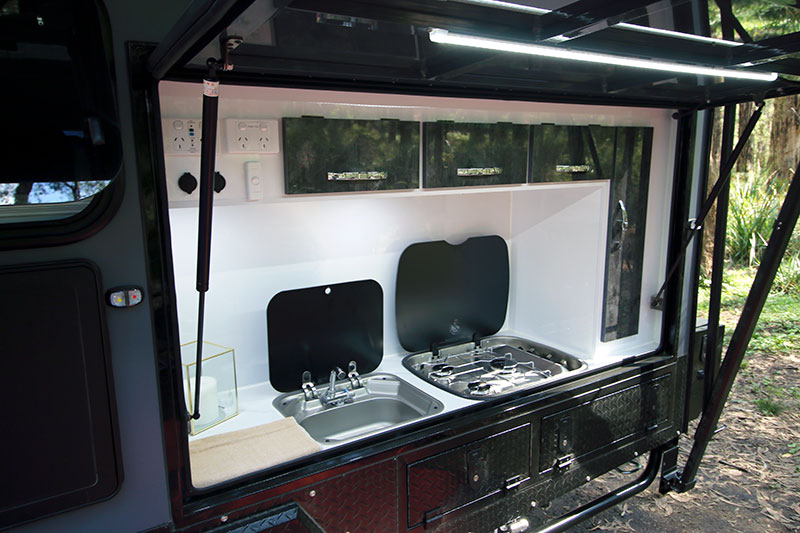 Within this kitchen area, you’ll find a couple of 12V points, 240V power, and even a stainless steel slide-out tray and cutlery drawer. If you’re cooking at night, Star Vision has you covered with an LED strip light in the lid.

The external storage is a genuine highpoint of the CX3 Pro. It seems that everywhere you look, there’s yet more storage space. The gas cylinders are kept in the storage box on the A-frame; however, there’s some storage space available here, especially on the offside slide-out, which should suit a 2kVA generator. 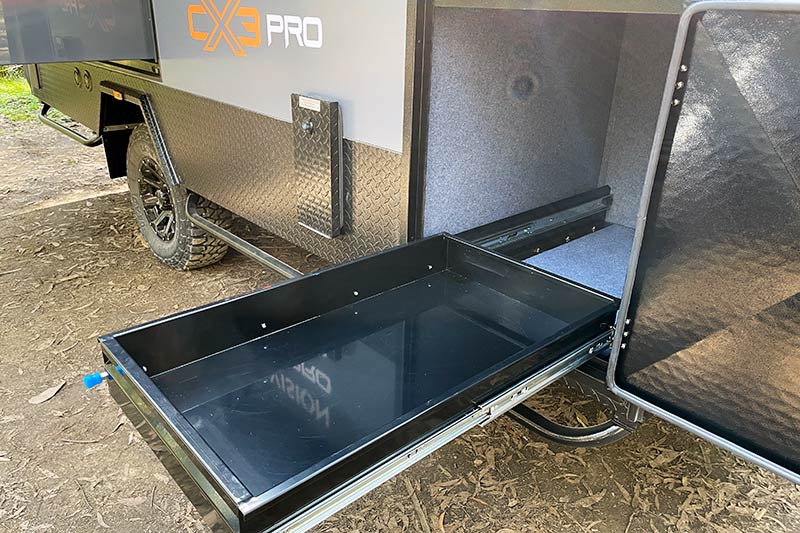 To the rear of that storage box, on the nearside, Star Vision has fitted a slide-out tray to suit a large portable fridge, with both an Anderson point and cigarette-style point fitted to suit. The company has also fitted a fan to improve air-flow and the efficiency of the fridge.

Another storage compartment is built in above the fridge slide, while you’ll find pole storage at the rear – a full annexe is an optional extra. 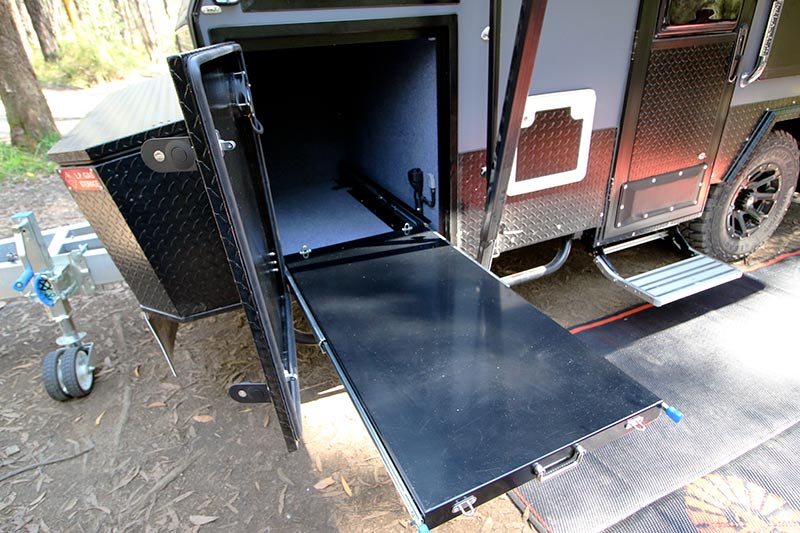 This camper comes with 200L worth of fresh water split between two tanks, along with a grey water tank mounted towards the rear. Everything appears reasonably well protected from stones and other road debris.

It rides on independent coil spring trailing arm suspension and 16in alloy wheels with 12in electric brakes. The chassis and A-frame are 6in hot-dipped-galvanised steel.

I had no issues with hitching up the CX3 Pro. A McHitch coupling is provided as standard, as is an Anderson connection for charging the rig’s three 100Ah deep cycle batteries while towing – 200W worth of roof-mounted solar is standard, too. I’m also a big fan of the ARK XO 750 jockey wheel that’s provided. 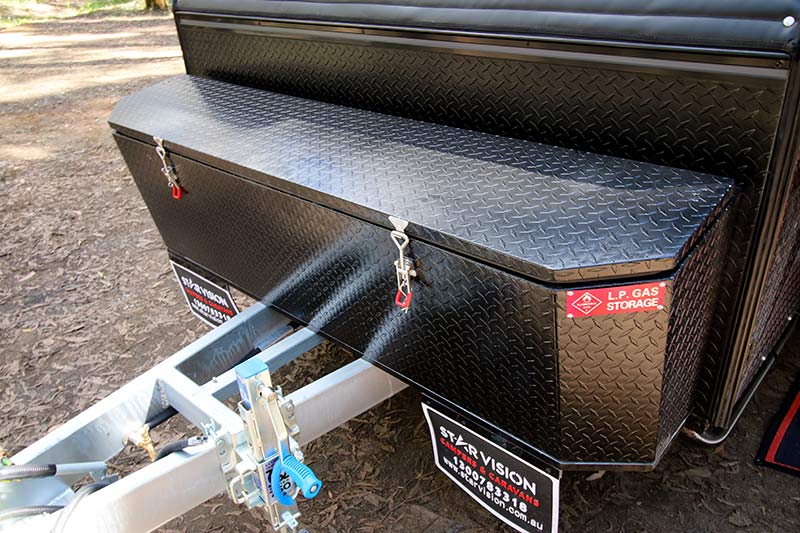 On the offside, Star Vision has included an external shower, while at the rear are two spare wheels.

To begin with, I was a little uncertain about setting up the camper. However, once I was shown, I realised that it’s quite intuitive – and surprisingly easy. First, set the awning to ‘open’ and roll it out a little. Then, you can undo each of the over-centre catches that keep the pop-top roof secure.

When that’s done, it’s simply a matter of pressing a button inside – the roof will automatically lift on electric rams. That’s right – no heavy lifting is involved. I loved this. 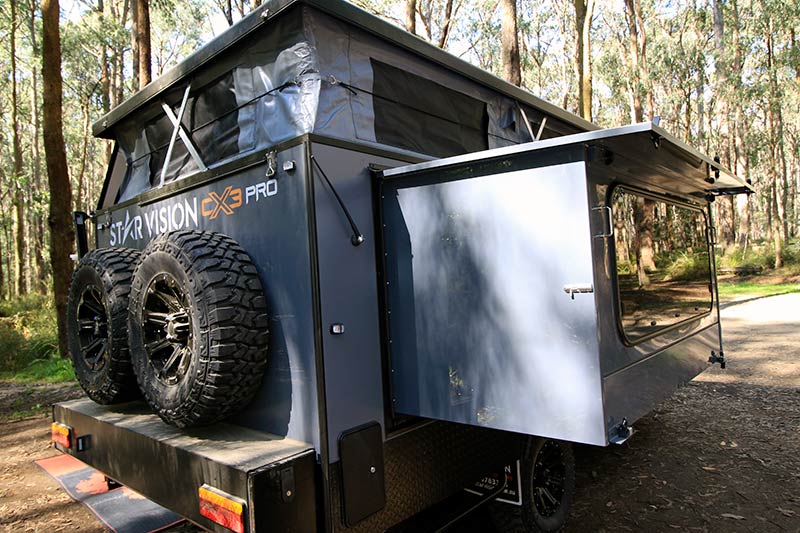 The Star Vision CX3 Pro features a fold-out section that’s similar to other rigs in its class. This area increases internal space, creating room for the bed. However, rather than being fitted to the rear of the camper, as with some of this camper’s competitors, it’s fitted to the offside. It’s just a matter of unclipping the roof, wall and floor panels and locking them together – it’s not difficult or time-consuming. And when you step inside, the benefits of this side-fold design become obvious.

The first thing I noticed inside was the walk-around space in the bedroom. I was not expecting this, given the compact nature of this camper. I was also not expecting the amount of cupboard and drawer space, both on the rear wall and the nearside. It feels open and easy – a little like a conventional caravan. 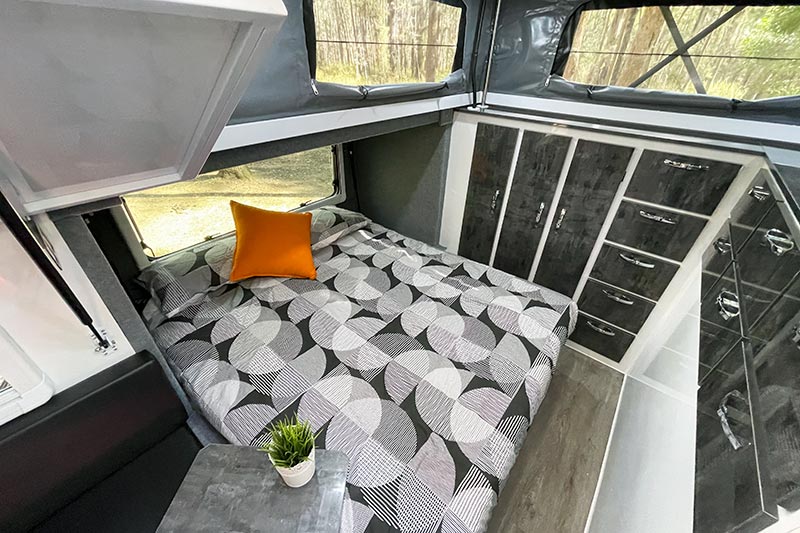 Lifting up the mattress reveals a hatch for access to the 2000W inverter and fuse panel, while at the base of the bed you’ll find a panel with several switches that allow you to isolate the various 12V functions, from the fridge in the slide-out to the external lights. The Projecta battery charger and water level indicators are found here too.

No, the dinette in this camper is not huge – but that’s to be expected. A small lounge is tucked into the front offside corner, while the table is actually removable – it slides in and out of the mounting point on the bed base as needed. 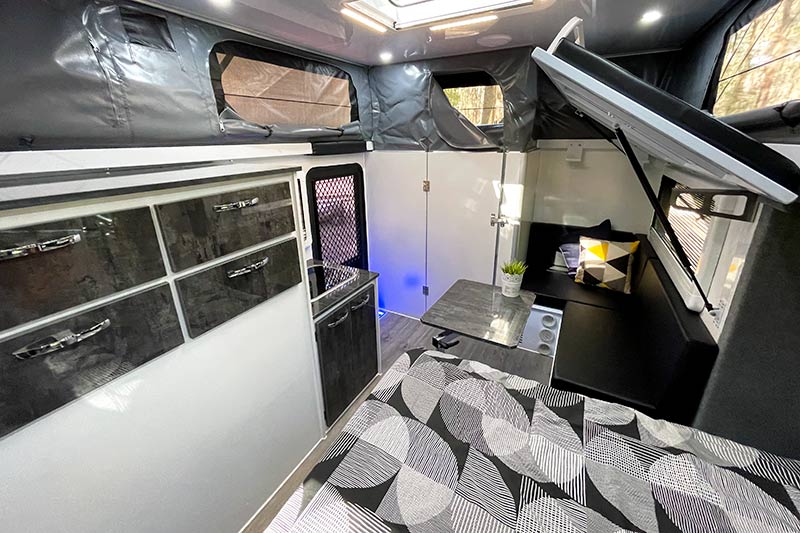 The dinette’s leg space is home to the switch for the hot water service, the vents for the air-conditioner, the solar charge controller and a couple of 12V points. There’s really nothing I’d want to add here.

Further, Star Vision has included a separate bunk above the lounge that lifts/lowers on gas struts. A combo bathroom is tucked into the nearside corner, complete with a Thetford swivel cassette toilet and hand-held shower rose. One of the struts for the roof lifting mechanism is sealed off here in the bathroom. 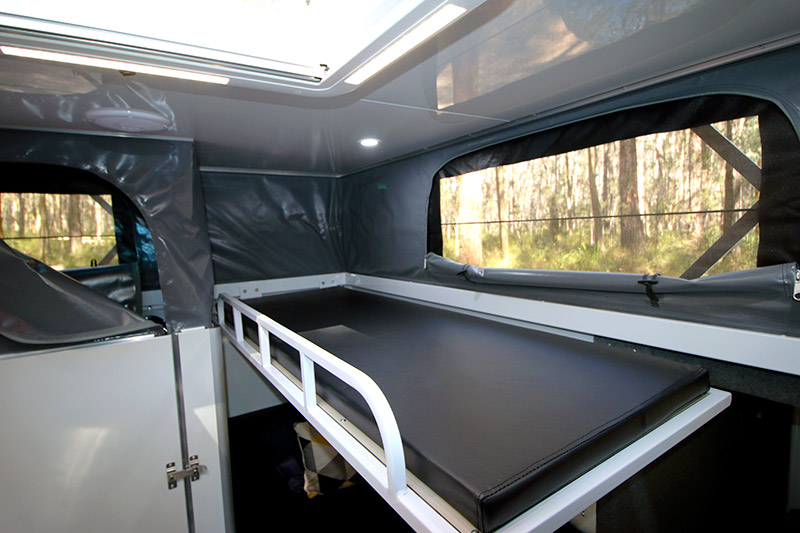 Finally, there’s a small sink on a bench near the camper’s entrance, complete with glass lid so that you can use this bench when the sink is not in use.

I towed the 15ft Star Vision CX3 Pro behind my MU-X on sealed and unsealed roads, as well as over some moderate undulations. It towed well on all fronts – I have no issues to report.

This hybrid camper was much more than I expected it to be. With some lateral thinking in terms of the design, the company has produced a surprisingly spacious and liveable hybrid.

The storage space is an obvious highlight, but the external kitchen and side fold-out are quite brilliant, too.

The only thing I would like is a few months off work to take it into the outback for a serious long-term test. The Star Vision CX3 Pro is a very intriguing proposition…