Since acquiring the Coromal Caravans brand, Apollo RV has steadily gone about overhauling the models in the range. This has, most notably, included the introduction of new build techniques that brought them kicking screaming into the 21st century.

The philosophy: to develop an ‘automotive’ product that was unlike anything made under the Coromal nameplate before.

We saw the results when Coromal launched the Pioneer Evolution in 2018. With its highly engineered FRV chassis, composite sandwich panels and one-piece composite floor and roof all locked together with aluminium extrusion, it was a revelation. Coromal was back.

The latest Coromal to receive a version of this construction is the Appeal. A prototype was unveiled at the 2019 Melbourne Leisurefest. It was, however, in the ‘refining’ stage, and I had the opportunity to provide feedback to the company. 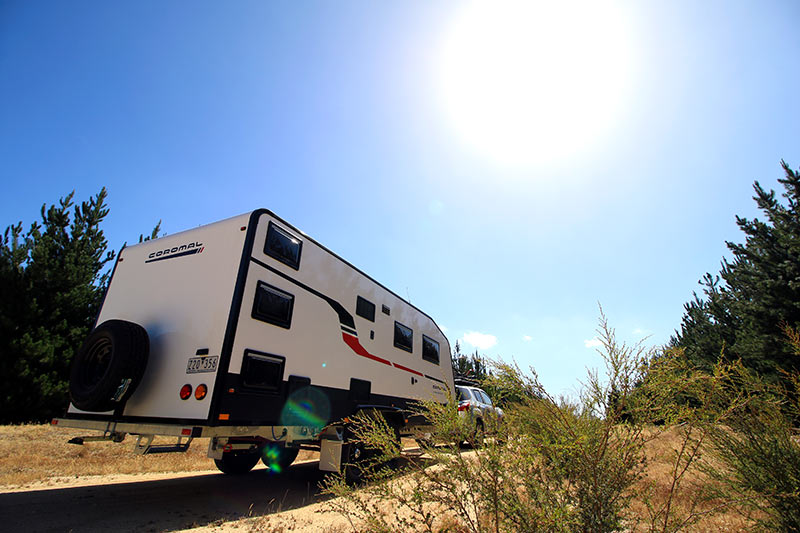 In my view, the van back then was close to being production-ready but attention needed to be paid to some areas. A couple months later, the van was in production, and I was given a three-bunk family layout – the Coromal Appeal 647 Trak-Pak – to test over the Christmas holidays.

And so, with the Christmas pudding still settling in our stomaches, my wife, three kids and I hitched it to our MU-X and headed to our holiday block on Victoria’s Ninety Mile Beach.

Though we were loaded the gunwales, we remained well within the Appeal’s 500kg payload capacity. Further, with 200kg on the towbar (loaded), the van towed very well.

This tandem-axle van is no minnow. It has a body length of 6.45m and acres of internal living space with all the features. Yet, it only weighs 2000kg Tare.

I suspect the secret to this van’s ‘weight loss’ lies as much in the chassis as it does in the composite construction. Employing the same technology as the FRV chassis found on the Evolution range, the Coromal Appeal’s chassis is laser cut, with lightening holes in the main and cross members. Unlike the Evolution range, however, the Appeal comes with a RHS drawbar that’s bolted to the chassis. 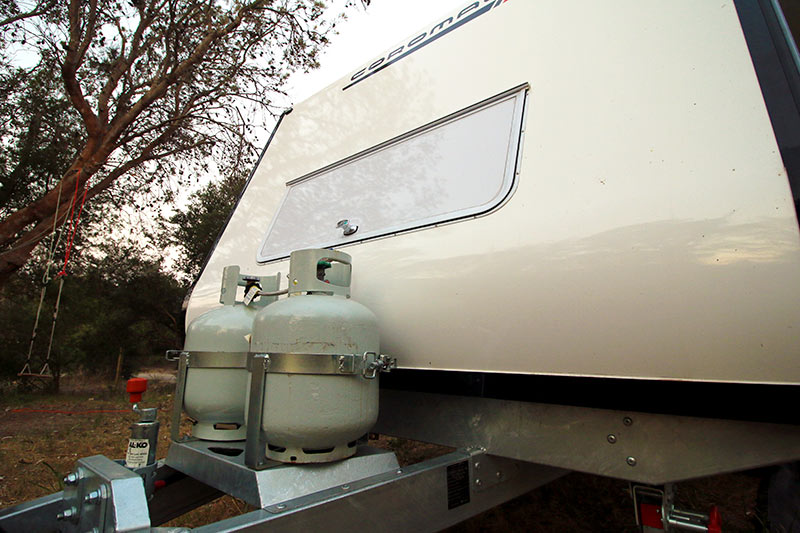 As our van was fitted with the optional Trak-Pak, which is designed for rough-road touring, it came with Coromal’s Esy-Tow RTV independent suspension, a 75mm chassis riser and 16in wheels.

At the pointy end, Coromal has opted for the Al-Ko 3.5-tonne offroad pin coupling, and you’ll also find a couple of 9kg gas cylinders and a centre-mounted jockey wheel.

The front boot is quite spacious – it easily accommodated our camp chairs and power leads, etc. There aren’t any other external storage compartments, but we didn’t need any.

There aren’t a great deal of external features on the Coromal Appeal 647, in truth, though it does have a roll-out awning, LED awning light and 12V point; however, a picnic table near the 12V point would be useful as a place to rest your device as it charges.

We were plugged into mains power throughout our test but the Coromal Appeal 647 comes standard with a 100Ah deep-cycle battery and a 25A charger.

In terms of fresh water, it comes with dual 59L water tanks and a 12V pump that’s mounted underneath the van. Now, our van was not fitted with a water level indicator, which made it difficult to manage our water consumption. Fortunately, our holiday block is equipped with a 5000L water tank, so topping up wasn’t an issue.

However, I believe this van really does need a water level indicator, especially considering the tanks are quite small.

Aesthetically, it’s a smart caravan that stands out from much of the crowd. The external fit and finish is also very good, including the gel-coat.

While the Coromal Appeal 647 on the outside covers only the basics, the inside is truly built for a family. With three bunks (or you can opt for two) across the rear, an offside combo bathroom, a nearside cafe dinette and forward bedroom, it makes good use of space. We certainly never felt cramped or ‘on top of each other’. 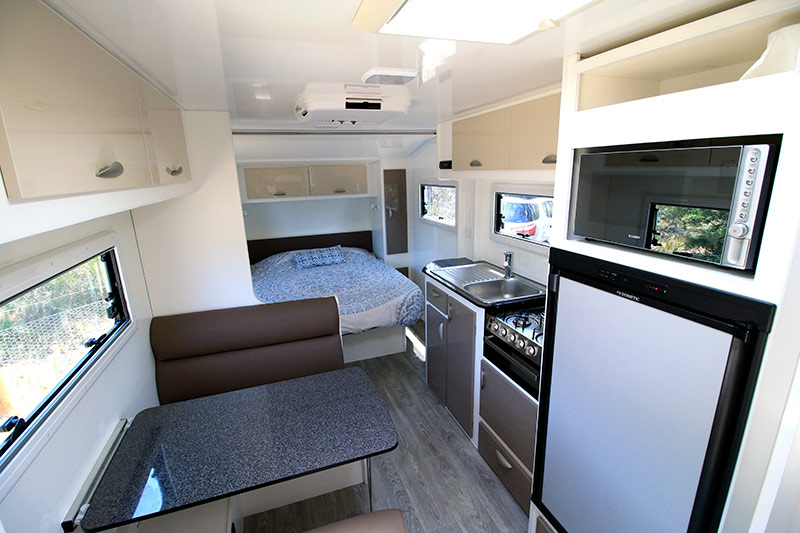 After living in the van for over a week, however, I developed a small list of things I would change or have added at the factory. First, the switch for the water pump glows orange when turned on. This would be fine, except for the fact that the door of the cupboard the switch is in has a few slots routed in it, disturbing the people sleeping on the main bed’s comfortable memory foam mattress. (After providing this feedback to Coromal, I believe a non-glowing switch will be used instead.)

Also, the three bunks could do with a 12V point for the kids to charge their iPads, etc., while the main bed could use the same. There is a ledge behind the bed, which works as a place to stash your devices, however, since our particular layout didn’t include side tables. 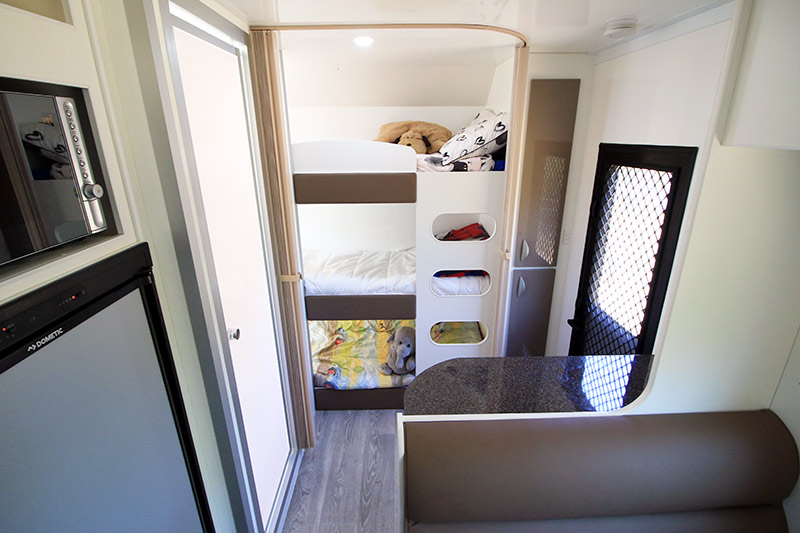 The van does have have a 12V point under the dinette table, as well as one at the nearside cupboard at the foot of the bed.

Generally, the van’s internal storage configuration worked well for us. A tall cupboard near the door acted as the kids’ wardrobe, the kitchen had ample cupboards and drawers, and the front bedroom’s wardrobes and overhead lockers gave more space than we needed. In fact, the large space under the bed base was barely used by us. Incidentally, this under-bed area is where Coromal has mounted the onboard battery and charger.

For a touch of class, Coromal has fitted a piece of timber across the width of the van, with LED strip lights hidden behind, where the roof of the van begins to taper downwards above the bed.

There is not a lot of kitchen bench space; however, the glass lid of the four-burner cooktop can be used for meal preparation, as can the dinette table. The 150L three-way fridge-freezer, we discovered, was sufficient for our needs. 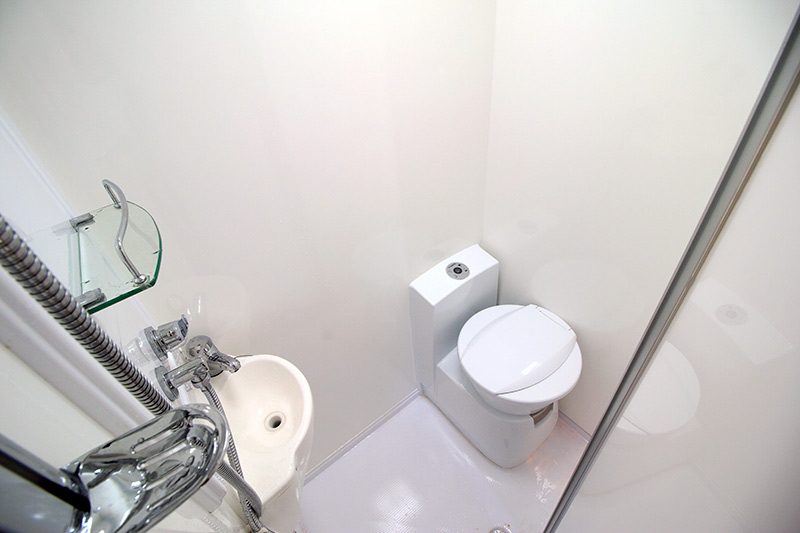 The combo bathroom includes a variable-height shower rose, a cassette toilet and small washbasin and I have no complaints about it. It also comes with a 12V extraction hatch.

Aside from a few joins that I felt could have been tighter, the fit and finish throughout was good. And the inclusion of a reverse-cycle air-conditioner was a relief – the heatwave over the Christmas period would have been unbearable without it.

Ultimately, Coromal has tried to make this van all about value for money. And I have to agree that at $52,990 (RRP), the company has succeeded. It is, after all, built on a light, well-engineered chassis with composite construction, a bathroom and various other comforts and features.

Yes, for long-term touring, it could do with a few other things, such as an external shower, a grey water tank, a solar panel, and perhaps even a bike carrier; however, these items and more can all be optioned in as required.

The Coromal Appeal 647 light, robust, and well suited to a family of five. It’s also likely that whatever 4WD is in your driveway right now will be able to legally tow it. The 2500kg-rated Prado is a case in point. 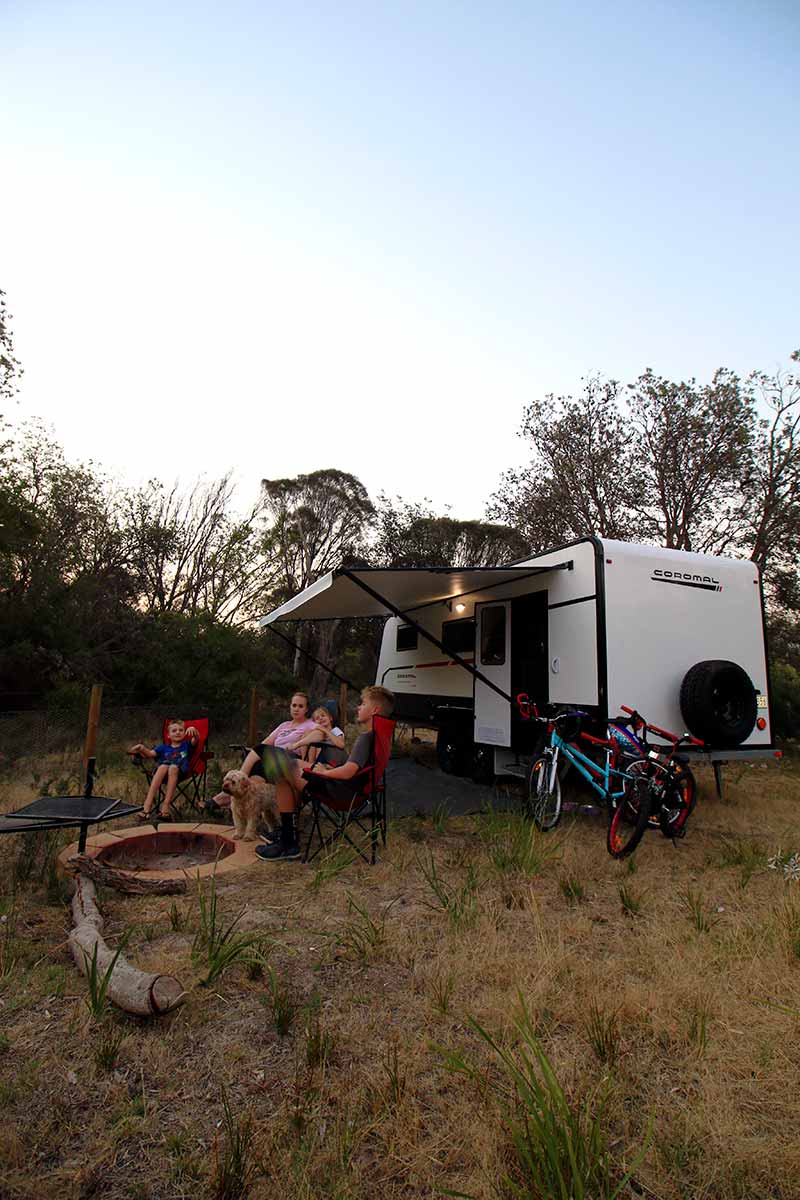 We had a great time with this van, and I was a little sorry to return it. It would’ve been a nice permanent addition to our family!

Battery: 1x100Ah deep-cycle with 25A charger 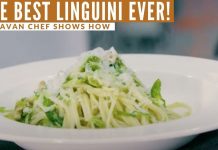 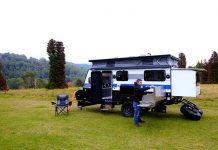