I’ve long pondered the motorhome lifestyle. I’ve always been an avid caravanner, but during those times of wet weather, hitching up in the mud and rain, wrestling with weight distribution bars, my mind has turned to the simplicity of a motorhome.

Avan has built B and C Class motorhomes, not to mention caravans and campers, for many, many years. It began about 25 years ago, with the launch of the classic Aliner, that curious A-shaped camper that continues to draw attention in van parks around the country. 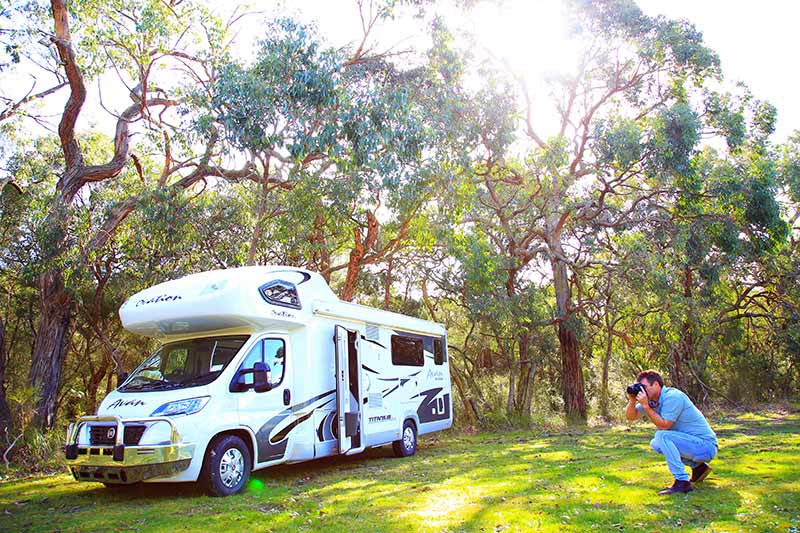 The company’s motorhomes might not have the same daring appearance, but they are still quite attractive, particularly on the inside. This is more true now than ever, following a redesign to the entire range to mark Avan’s 25 years in business.

Reminiscent of the contemporary Allure interior design that Avan launched in 2012, the redesigned motorhome interior is bright, glossy and cheerful.

The cab-chassis C Class Avan Ovation M7 Slide-Out Titanium Series, based on the Fiat Ducato Maxi, is quite comfortable to drive. The driver’s cab affords a decent view of the road ahead and the large side mirrors provide plenty of rearward vision. 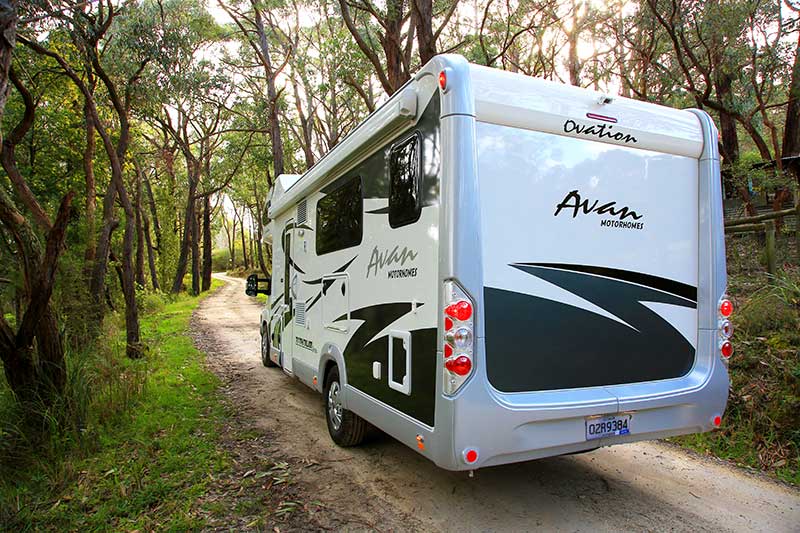 It’s a fairly nimble performer on the open highway, though the engine suffers some momentary turbo lag. The van was unladen when I reviewed it (save for the fuel in the tank) and though it was a little hesitant when climbing hills from a standing start, medium inclines weren’t an issue when it already has some momentum.

The living quarters, thanks to the overhauled interior design, are very inviting. It’s an easy walk-through from the cab to the dinette, which is comprised of a forward-facing seat (with two seat belts) on the offside, a sideways-facing lounge on the nearside, a table, and naturally, the driver’s and passenger’s chair can swivel around, too.

Behind the dinette, you’ll find the offside kitchen. Now, it is on the small side with a minimal amount of bench space; however, the lids over the round stainless steel sink and three-burner cooktop could be used, as could the nearby dinette table.

Directly opposite, Avan has fitted a tall fridge-freezer, a microwave and a full-height pantry. Other storage options in the kitchen include a number of overhead lockers and cupboards. As part of the redesign, Avan has tried to maximise cabinet storage – in a clever move, the company has hidden a cutlery drawer within another drawer. Just open the main drawer to find a slim drawer within. 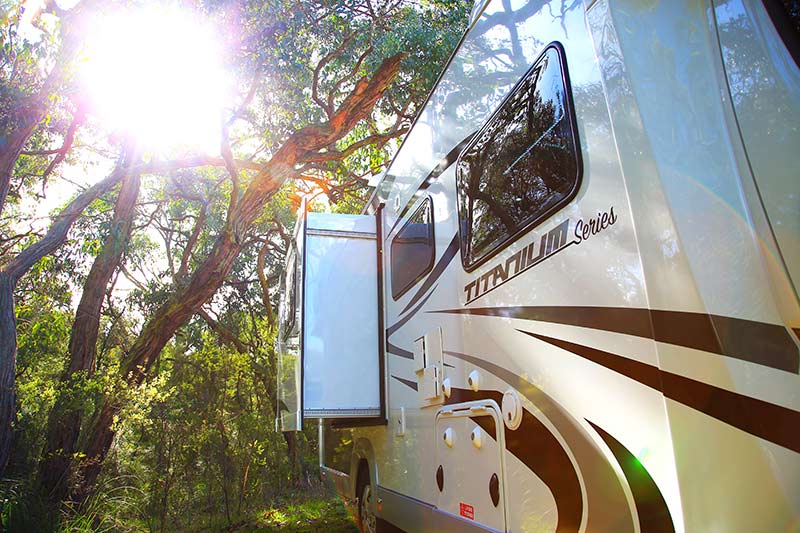 The bedroom sits between the kitchen and the rear bathroom. At the press of a button, the offside slide-out glides into position, taking the east-west bed with it. The result: about 400mm (my guess) of space between the foot of the bed and a nearside storage cabinet.

While there is little in the way of side wardrobes (though there is one storage ‘nook’ and a large drawer between the bed and bathroom), the cabinet at the foot of the bed affords a lot of storage space. What’s more, it houses arguably the ‘star’ of the motorhome: a 42in flatscreen TV that gently rises from within at the press of a button. I know, this has been done before, but it’s still neat. The Panasonic speaker mounted above is a nice touch, too. 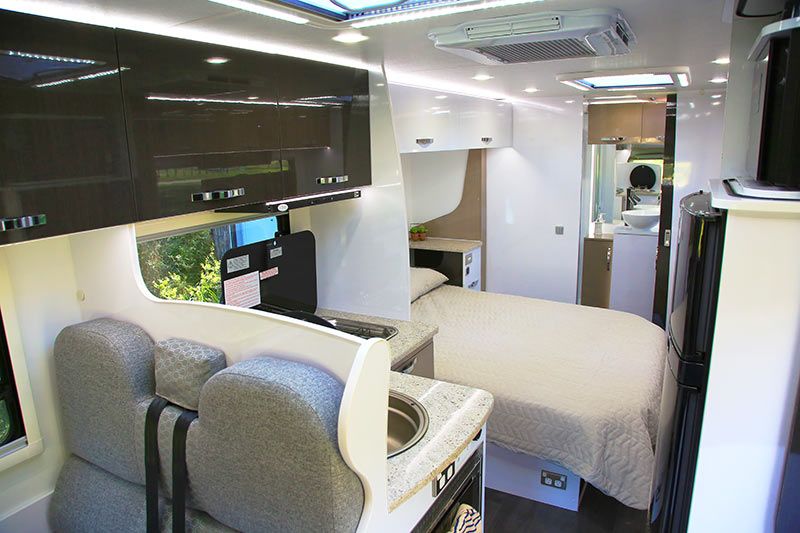 I also liked that this motorhome can still be used when the slide-out is closed – lift the bed base and you can access the bathroom without climbing over the mattress.

The bathroom is as stylish and modern as the rest of the motorhome. It has a separate moulded-fibreglass shower (with glass door) on the offside, a cassette toilet on the nearside, and a vanity in between. The bathroom is well-appointed, too, with features such as a wall-mounted, front-loader washing machine above the toilet, a large mirror, classy tapware and more. However, the bathroom is on the narrow side.

Having said that, every caravan and motorhome layout requires a compromise or two, given there is a limited space to work with. The question is, would you be prepared to sacrifice some living space for a slightly larger bathroom? 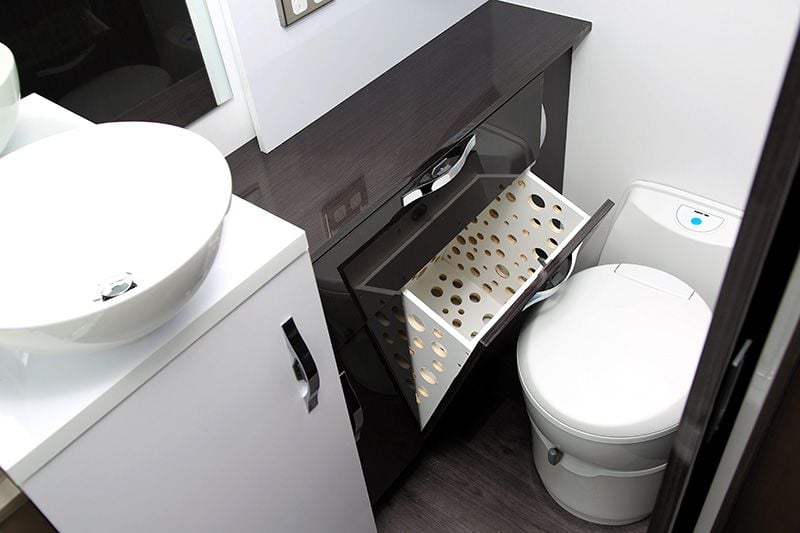 A final word on the bathroom: I loved the fold-out laundry hamper next to the toilet – it’s another example of how Avan has tried to optimise cabinet space throughout this rig.

Among the other interior features, the Ovation M7 Slide-Out is fitted with a Belaire 3400 reverse-cycle air-conditioner, a stainless steel rangehood, a small circular draining board, a digital battery voltmeter and water level indicator (you can switch off all 12V power to the van at this display), and even a rubbish bin built into the door. 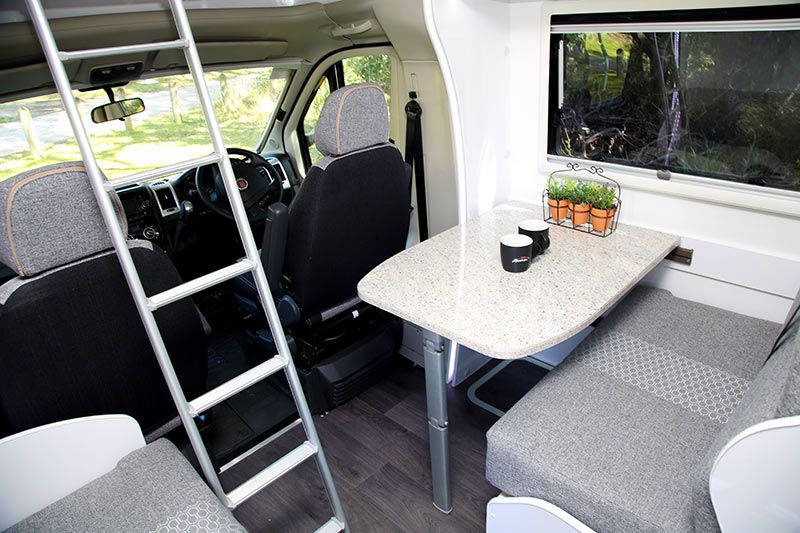 In the Luton peak, the Ovation M7 Slide-Out has another double bed, which lifts out of the way when not needed, and is easily lowered on gas struts when it’s bed time. A light but sturdy ladder is included (under the mattress is the perfect place to store it), as is a cargo net – the Luton peak is, after all, a great storage area. 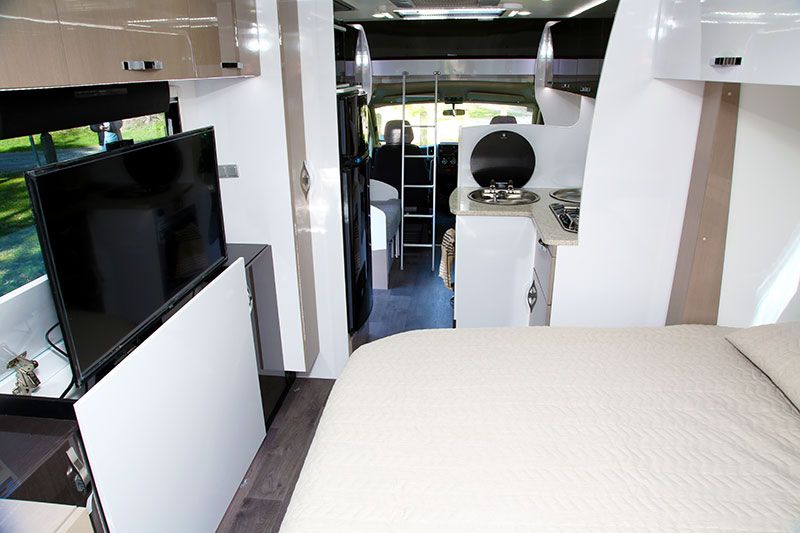 I noticed no rough edges or imperfect joins in this van, and I was especially pleased to note that the cabling that runs through overhead cabinets had been professionally covered.

The Ovation M7 Slide-Out is built on an Al-Ko chassis, with aluminium composite panels that Avan says are dent/impact-resistant.

Dual slide-out trays, one either side, are among the most notable external changes to the new-look Ovation. These lockable trays slide out from under the body of the motorhome, and are provided in lieu of traditional external lockers. 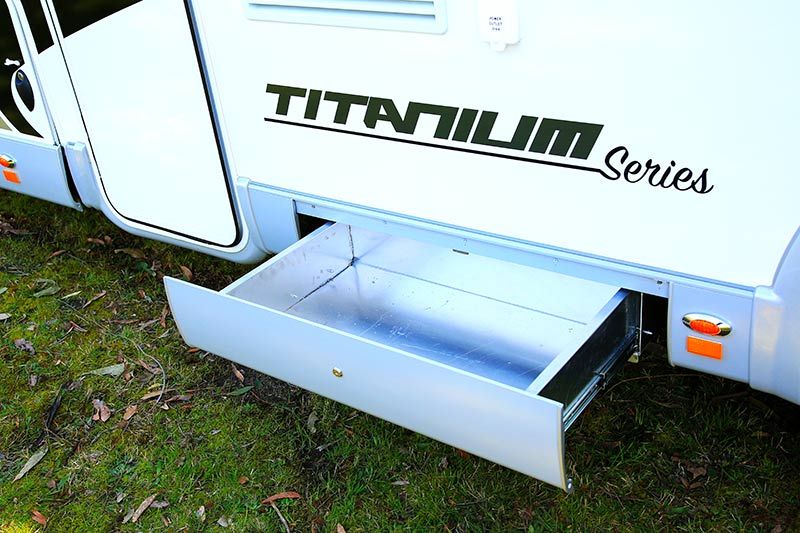 One large locker is positioned up front, on the nearside, however, and the dual gas cylinders are in a similar locker on the offside.

In terms of entertainment, Avan has fitted an external ‘entertainment hatch’, under the wind-out awning, complete with a flatscreen TV. Meanwhile, the rear of the motorhome sports a reversing camera.

This motorhome offers 680kg worth of payload. With the fuel tank, fresh water tank, and two gas cylinders full, there is 439kg left to work with, or 329kg if the grey water tank is full as well. Of course, it’s important to also factor in the body weight of all on board and any water that might also be in the hot water service (which is true of all vans). Ultimately, much depends on how you travel.

The redesigned cabinetry, including the glossy, contemporary laminate finishes throughout, have certainly breathed new life into Avan’s motorhome line-up, though I still think the classic ‘timber’ look has its appeal.

The Ovation M7 Slide-Out is priced quite well, too – $158,000 (ex-Melbourne) as shown seems about right. Solar panels aren’t included, but those, along with a generator if you really needed one – could be added later. Overall, it’s an attractive package.