Olympic Caravans has been building caravans for many years. In fact, ‘many years’ doesn’t do the manufacturer’s longevity justice – this well-regarded company is celebrating 30 years of manufacturing.

That’s right: as Australia celebrated its bi-centennial in 1988, an idea between family members was taking shape. Olympic Caravans was being established. 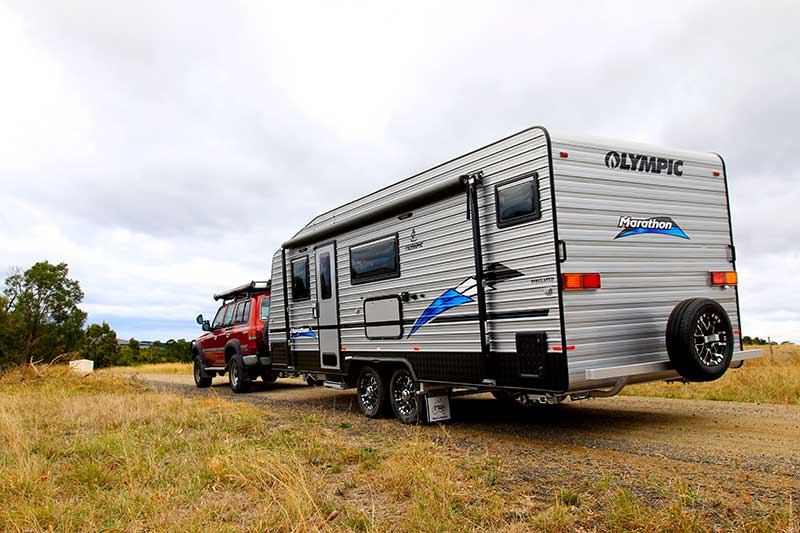 The company builds a range of vans – most models have sport-themed names, such as Triathlete, Sprinter and Marathon, which has been in production for six years.

On a cold, windy autumn day, we hitched up a Marathon and headed north out of the Victorian suburb of Campbellfield, Australia’s caravan manufacturing capital, for a closer look at the van Olympic considers its flagship.

Our Marathon is available in a range of sizes and layouts. The layout of our review 21ft Family Marathon is relatively new and, by all accounts, it’s proving to be quite popular. I think I understand why. 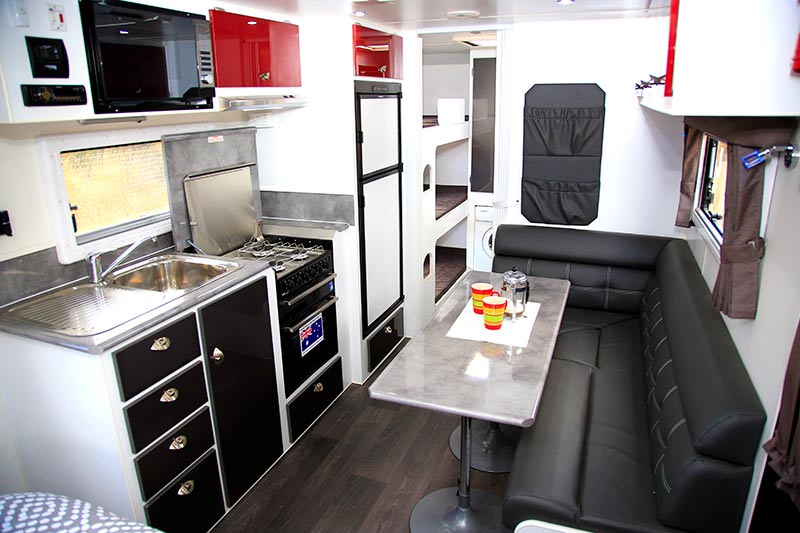 The layout is comprised of a forward north-south bed, an offside kitchen, nearside L-shaped dinette, and a rear kids’ bedroom. This bedroom, for my money, is the highlight of this caravan. It has three bunks (two bunks can be fitted instead) on the offside, a bathroom door on the nearside, and a rather large cupboard in between, against the van’s rear wall, with a Dometic front-loader washing machine underneath. 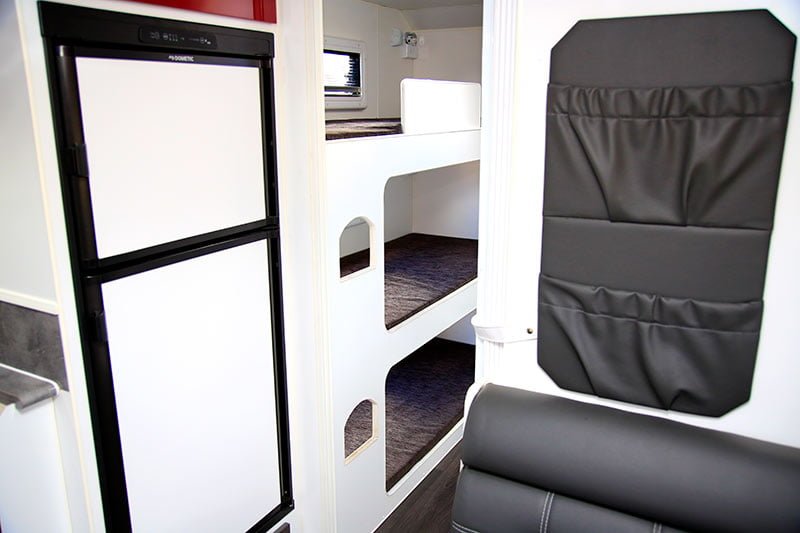 Each bunk comes with its own 12V powerpoint (incorporating a USB point, too), reading light and 240V point, so the kids can remain entertained for hours on their portable DVD players or tablets without fear of their devices running flat. 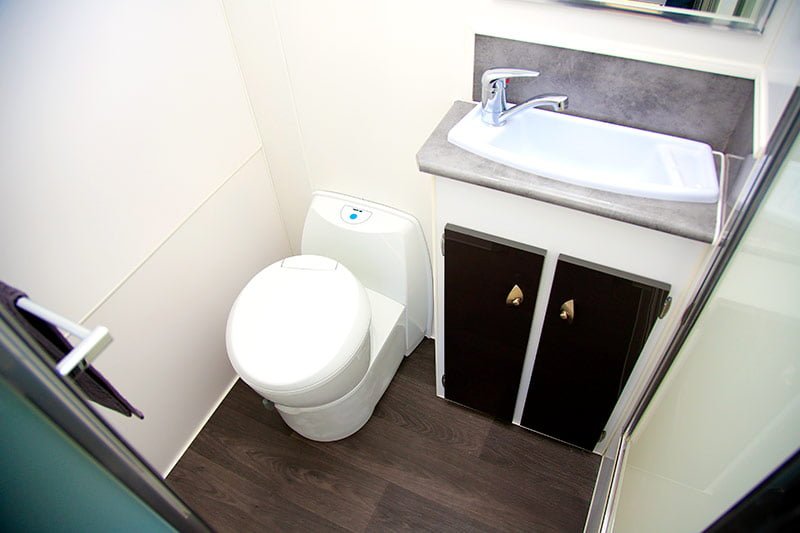 The bathroom door hides a cassette toilet, a vanity unit, and a separate moulded-fibreglass shower. When I showed her the pictures, my wife immediately took a shine to this bathroom, especially the space and privacy it affords. 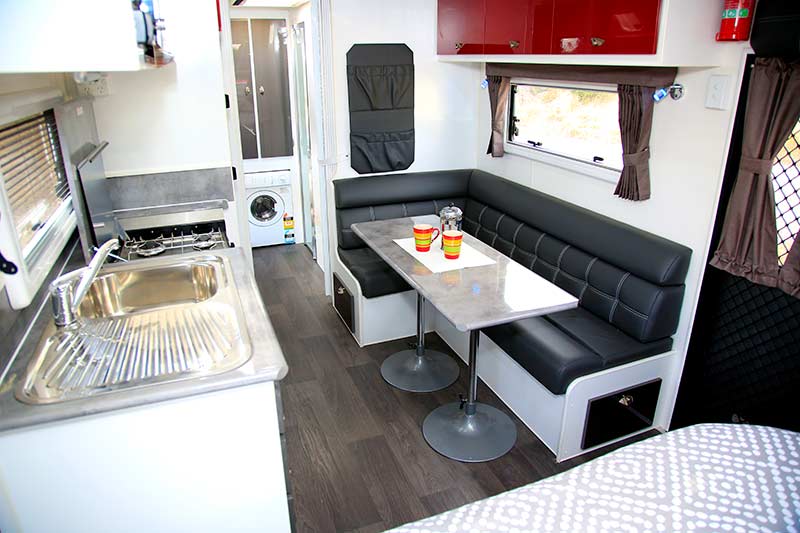 The kitchen incorporates a four-burner cooktop, griller and oven, some pantry and drawer storage space, a microwave built into the overhead cabinetry next to the sound system, and a sink with flick-mixer tap. There is only one overhead locker, however, or two if you count the one above the 185L Dometic three-way fridge-freezer.

The van’s water level indicator, and the switches for the gas-electric hot water heater and water pump are mounted next to the microwave. I’d prefer to have them inside the locker above the stainless steel rangehood, simply because this would de-clutter the overhead cabinetry. Besides, the locker above the rangehood already houses the regulator for the standard 130W roof-mounted solar panel, so why not a few extra switches?

The kitchen in the 21ft Family Marathon comes with post-formed benchtops; however bench space is on the small side. Thankfully, the cooktop is recessed into the bench, allowing it to be covered by a hinged section that can be used when the cooker is not in use.

The dinette should comfortably seat two adults and a child or two, and naturally there are some overhead lockers and a couple of reading lights here. 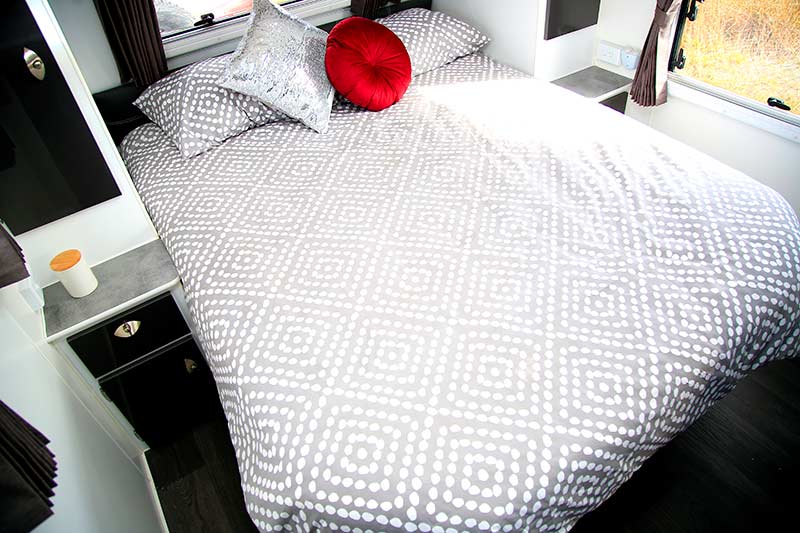 Mum and dad’s bed sits in the nose of the van, surrounded by a bedhead of overhead lockers and side wardrobes. The offside bedside table is fitted with a 240V powerpoint and two 12V points; however, the nearside only gets a 240V point – I’d love to see a 12V point on this side. I should also point out that the while the nearside wardrobe has storage space under the bedside table, the offside doesn’t.

Overall, the interior of the 21ft Family Marathon is bright (two skylights are included), modern and large families should find the layout particularly appealing.

Our review Olympic Caravans Marathon was built on a 4in SupaGal chassis with tandem-axle Roller-Rocker suspension. Underneath, you’ll find two gal-protected water tanks mounted forward of the axles.

In some respects, the van is traditional in the way it’s built: a meranti timber frame clad with ribbed aluminium. There’s nothing wrong with that. In fact, this construction method remains one of the most popular in Australia. But if you’d like your Marathon to look a little more modern, smooth composite panels are available instead. 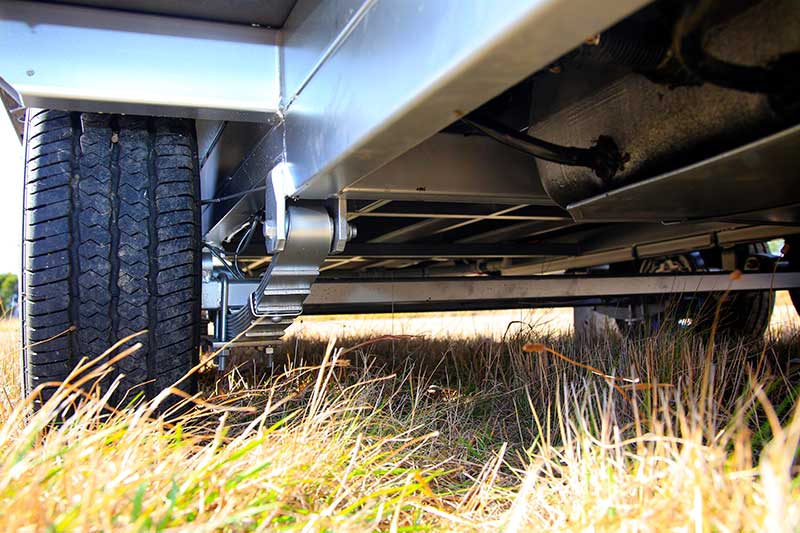 Given the size of the van – over 8m tip to tail (the ‘21ft’ in the van’s name refers to the internal length), I thought it’s unladen weight of 2040kg was very reasonable. The payload capacity of 450kg should be adequate, too, and I must say that I was pleased to find a proper family van with most of the trimmings that could be towed, fully laden, by my old Land Cruiser.

Speaking of towing, I hauled it on a 100km test route (without load-levellers) incorporating open highway, city streets and gravel roads. While it buffeted slightly in strong cross winds, the van remained planted to the road – there was no inordinate side-sway or pitching on the towball.

Externally, the van has all of the features you’d expect for its price point, such as a fold-down nearside picnic table, a 17ft roll-out awning, an LED awning light, a 12V powerpoint, and a spare wheel mounted on the rear bumper. 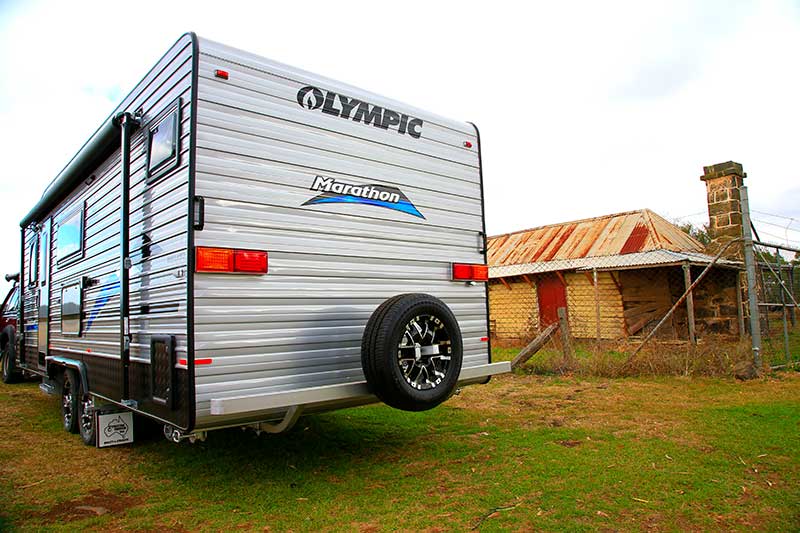 Storage-wise, the van doesn’t have a traditional front boot; instead, it gets a right-through, gal-lined tunnel boot with a 12V light just inside the hatches on either side – the breakaway unit is in the tunnel boot on the offside.

Dual 9kg gas cylinders are on the drawbar, along with a freshwater tap. The van uses a 12-pin plug, and an Anderson plug comes as standard. The coupling is a 50mm ball unit.

Overall, at $56,000 I think the 21ft Family Marathon by Olympic Caravans offers decent value for money. It is a genuine family van that can be towed by the Prados and Pajeros of the world.

Is it the most glamorous caravan, or the most extensively appointed? No, but that’s not the point. It is a good, honest rig for a reasonable price. I suspect it would be a faithful family companion on short or long getaways.