In late January, I found myself in Dargo, Vic, a country town in the High Country as part of a trip involving three JB caravans. We had the offroad JB Caravans Scorpion Sting and Gator, as well as the 19ft 6in JB Caravans Dirt Roader.

As its name suggests, the JB Caravans Dirt Roader isn’t an ‘offroader’. Instead of severe undulations and steep rock steps, it’s built for national park corrugations and similar terrain. With the van hitched to an Isuzu D-Max, I took the helm and spent a couple of days towing this rig along plenty of gravel, up and down inclines, and across deep crevices in the tracks.

At the end of the trip, one question remained. If I was in the market, would I buy it? 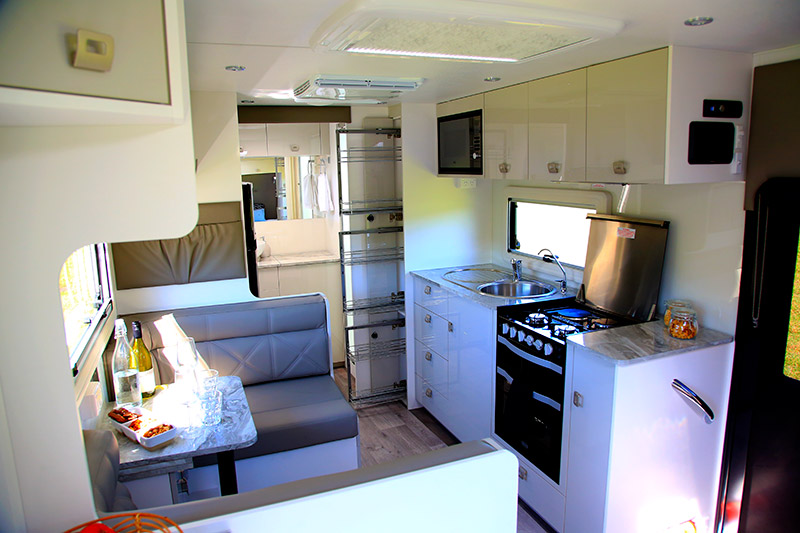 In this van, JB Caravans has wisely opted for a tried and tested layout that maximises space for couples, placing heavy items such as the fridge over the axles, with lots of room left over for a large bedroom and bathroom. 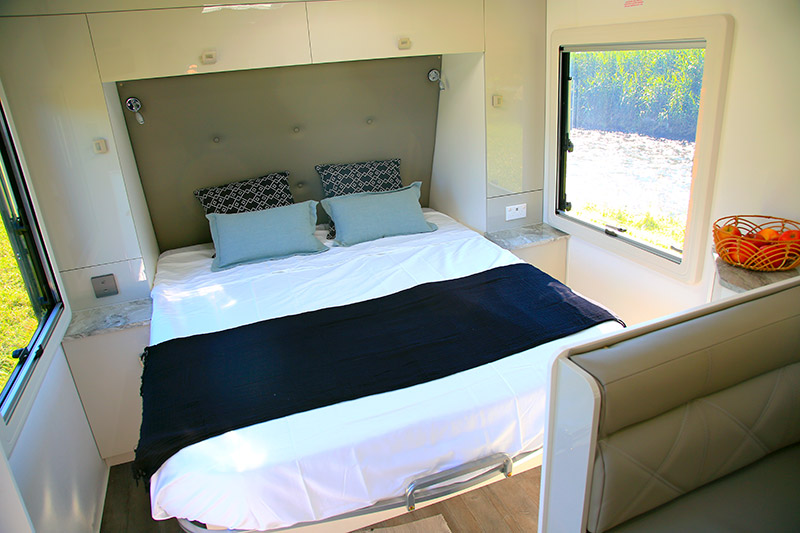 I immediately noticed how spacious it was around the bed. There’s plenty of room to either side, not to mention a decent amount of storage under the bed base itself. As usual, the bed lifts on gas struts. Some of the potential storage space is occupied by the housing for the external tunnel boot, yes, but you should nonetheless find adequate room here for your gear.

There’s a wardrobe either side, too. The offside wardrobe is fitted with a 240V powerpoint with integrated USB points, while the nearside has just the USBs. 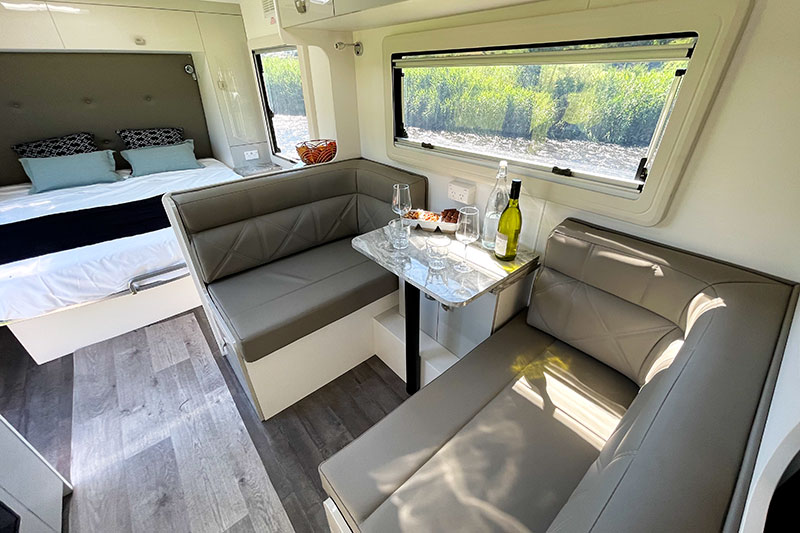 A cafe-style dinette is fitted to the mid-offside. Complete with a tri-fold table, a small cupboard between the chairs, it’s a very comfortable spot to sit and gaze out of the window. Drawers provide access to the under-seat storage spaces, which I liked. You’ll also find yet more USB charging points nearby, allowing you to charge your devices while you peruse in comfort.

Opposite the dinette is the kitchen, complete with a four-burner cooktop, griller and oven. Bench space is unfortunately tight. When it comes to meal prep, you’re limited to the glass cover of the cooktop, or perhaps the dinette table.

Having said that, food storage space is very impressive. Between the rear bathroom and the kitchen, JB Caravans has given the Dirt Roader a huge pantry comprised of three separate slide-out shelves. And then there’s the numerous drawers, the cupboard under the sink and the overhead lockers beside the recessed microwave.

Often, it’s in one of these overhead lockers that you’ll find the 12V nerve-centre of a caravan. In the JB Caravans Dirt Roader, however, JB has sensibly moved this equipment to the nearside corner cupboard at the foot of the bed – a cupboard which, in my experience, isn’t as useful as an overhead. Here, you’ll find a BMPRO BatteryPlus 35 battery management system and OdysseyLink.

This is a very clever system. Essentially, the OdysseyLink allows users – with the addition of separate ‘SmartConnect’ sensors – to monitor things like tyre pressures, the temperature in the fridge, water and gas levels, and more, with this information displayed on a smartphone app or on the 7in screen mounted in the entrance. 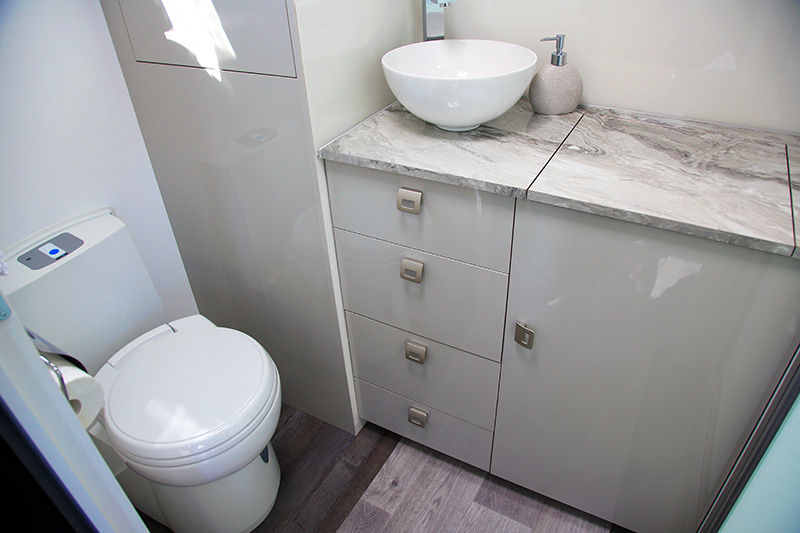 And then there’s the bathroom. It feels particularly spacious while being undeniably nicely finished off. It features the usual central vanity with washbasin and a top-loading washing machine hidden beneath the bench. Just lift up a special hinged section for access.

A fibreglass shower with handheld shower rose is positioned on the nearside, while a cassette toilet sits on the offside. The best part: JB Caravans has installed a large linen cupboard with three shelves in the offside corner. The space below the linen cupboard isn’t accessible from the inside, however, as it is set aside for external storage space that’s accessed via a hatch.

Throughout the van, I was impressed by the fit and finish. It is well equipped, with 240V and USB points throughout. All edges are neatly edge-banded, there are no unsightly exposed screw heads or unfinished edges.

Other features include, of course, a large fridge-freezer, a reverse-cycle air-conditioner, and a CD/stereo system linked to speakers inside and out. It is a very welcoming, comfortable interior space. 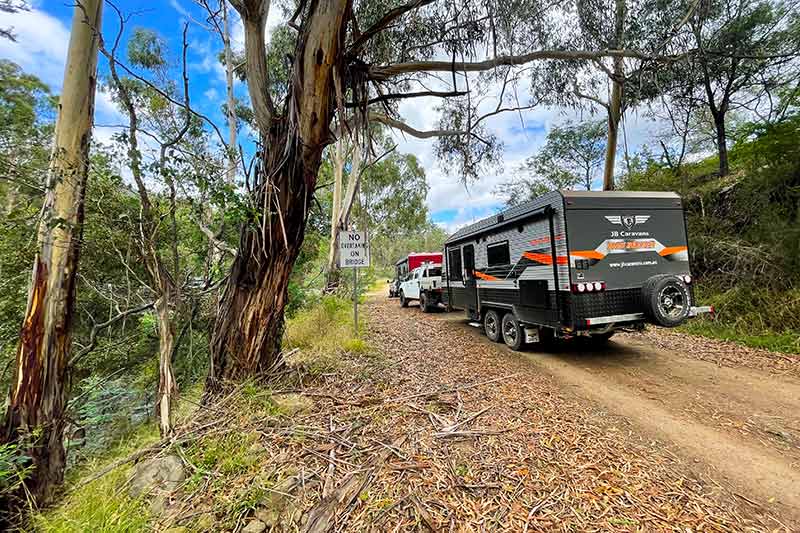 It performed to all expectations on the various corrugations and mildly-scalloped tracks I ventured down around Dargo.

Its Tare weight of 2370kg felt about right for this van, and the D-Max certainly had no issues hauling it. Truth be told, I felt very little ‘feedback’ from the van as I towed it along various corrugations.

The 12V system of the JB Caravans Dirt Roader is comprised of two 135Ah deep-cycle batteries coupled to dual 180W roof-mounted solar panels, with all charging managed by the onboard BMPRO system. 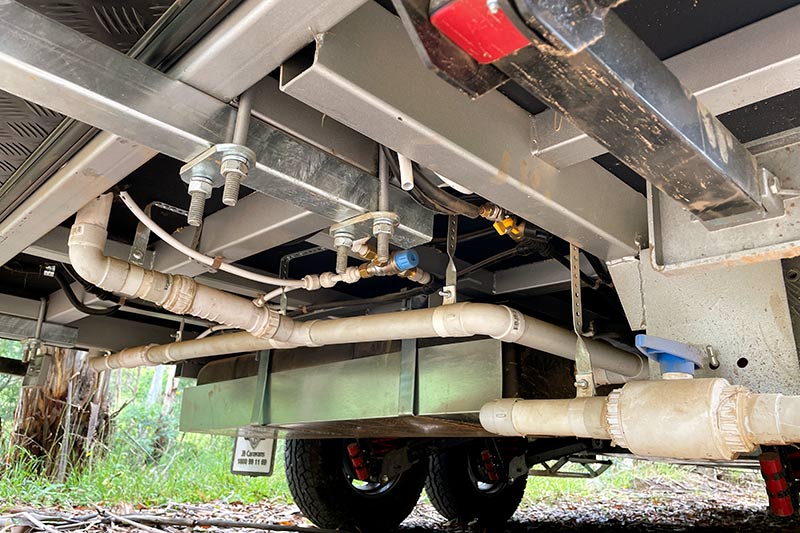 In terms of the water storage, there are two 95L tanks mounted forward of the axles, and it’s worth noting that when full, they will have a bearing on the van’s ball weight; however, the unladen ball weight is a reasonable 156kg. Given the ATM of 3300kg, any potential tow vehicle should have a maximum towball mass that’d easily accommodate the ‘water weight’. A 95L grey water tank is mounted aft of the suspension.

I had no concerns regarding exposed or vulnerable underbody components – everything seems appropriately positioned for a van of this type. 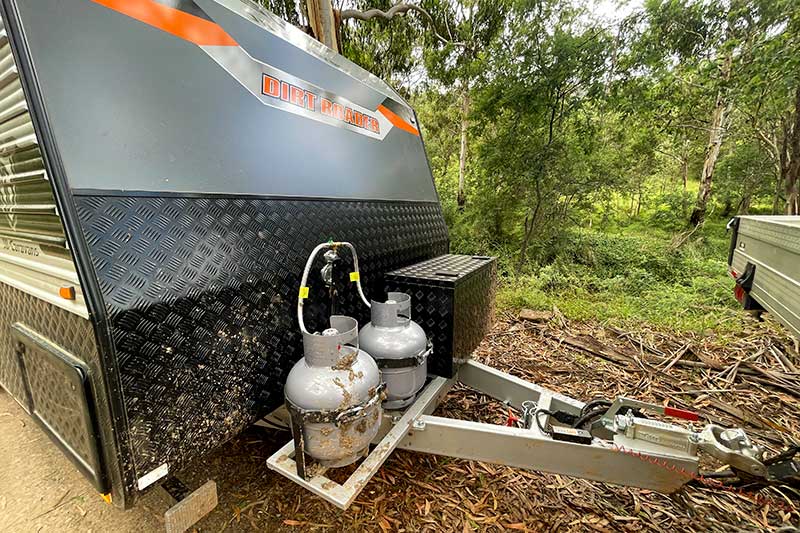 On the drawbar, there’s a storage box fabricated from checkerplate, with a lid that lifts on gas struts. Interestingly, this box is offset to the nearside, creating room to the offside for dual 9kg gas cylinders.

The nearside of the van isn’t flush with features but the essentials are covered, with a roll-out awning, a couple of LED lights, speakers, a fold-out step and a picnic table to the rear. 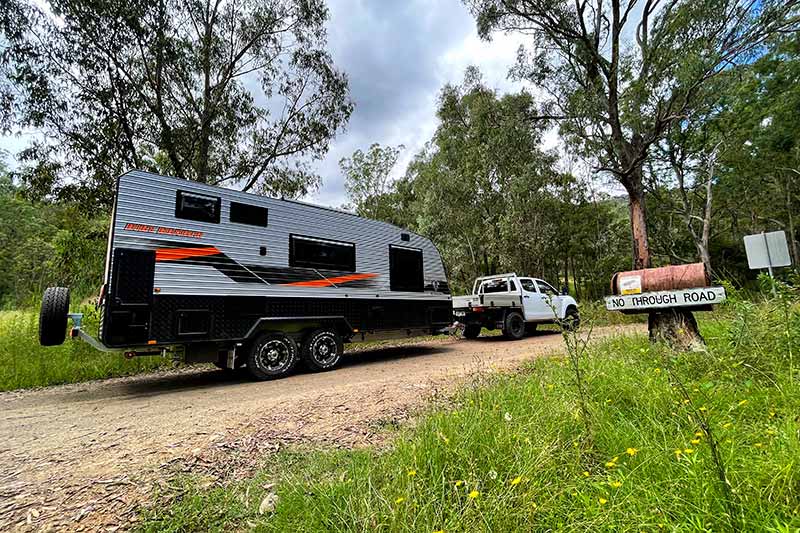 Overall, the exterior of the van appears well and truly fit for purpose. I was especially pleased with its performance under tow as we negotiated a range of Dargo’s tracks.

It’s spacious, offers plenty of storage options, and is a pleasure to tow. The JB Caravans Dirt Roader instilled a genuine sense of confidence during my Dargo jaunt and I was pleased to have it. Nothing broke, bent or wavered.

To answer my earlier question: would I buy it? You know something? I really would.

Chassis: SupaGal 4in with 6in A-frame