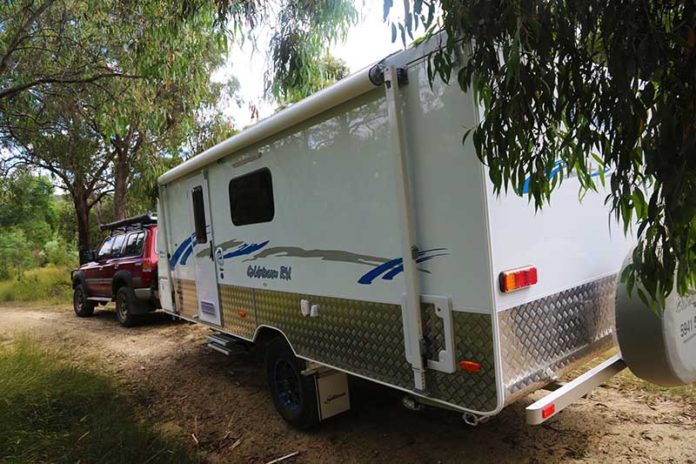 Australian caravanning means three things: amazing destinations, time with your loved ones, and a healthy dose of mythology. Many campfire discussions have devolved into heated debates about the rules of the road as they apply to caravanning. Here, we’ll debunk five popular myths. Although, let’s face it, there are plenty more out there, which we’ll address another time…

I was wandering Facebook when I came across a towing-related post that claimed you should not attach your van’s safety chains if you were using breakaway brakes. According to this well-intentioned comment, the safety chains would prevent the brakes from activating if the safety chains were attached because they would prevent the cable, which should be secured to the towbar or another permanent part of the tow vehicle, from activating the breakaway brake controller.

Nonsense. The safety chains are designed to keep the caravan attached to the tow vehicle in the event they become otherwise de-coupled. The breakaway brakes are an emergency system designed to prevent the caravan, should the safety chains fail too, from careening further down the highway than it would without them.

A breakaway system is mandatory on all caravans with a Gross Trailer Mass of 2000kg or more, and they must remain activated for at least 15 minutes after the vehicle and van have separated. To have a van registered in New South Wales, you’re required to have a special monitor in the driver’s cab that shows the state of charge of the battery powering the emergency braking system.

2. I ONLY NEED ONE SAFETY CHAIN

Safety chains are compulsory all around Australia. Vans weighing less than 2500kg ATM are required to have at least one safety chain, while trailers weighing between 2500kg and 3500kg ATM must have two. The chains must comply with AS4177-4.

The only exception is in Western Australia, which requires two safety chains for vans under 2500kg ATM.

The safety chains should criss-cross each other, so the chain on the right side of the drawbar attaches to the left side of the towbar, and vice versa. The reason: should the coupling fail, the drawbar will fall onto the criss-crossed chains rather than the bitumen.

The chains should be fitted as tightly as possible, leaving only enough slack to permit tight turns.

Safety chains must be stamped with the manufacturer’s identification number, the numbers 4177 (which refers to the relevant Australian Standard), and the chain’s safe working load. This rating will often be identified by the following markings:

This one is controversial. For many years, it has been said that the D-shackles that secure the safety chains to the towbar ‘should’ be load-rated and stamped with the maximum load rating. But the word ‘should’ is quite different to the word ‘must’.

The standard that applies to D-shackles is AS 2741-2002; however, it doesn’t specify the use of D-shackles for towing purposes. However, some states have issued guidelines in relation to D-shackles used for towing and the national caravan body, the Caravan Industry Association of Australia, recommends vanners follow them. I do too, for that matter.

It is highly advisable that:

4. MY REAR-VIEW CAMERA IS A SUBSTITUTE FOR TOW MIRRORS

No. It’s not. As far as the law is concerned, the driver must have a clear, unobstructed view along both sides of the caravan. A rear-view camera may assist to fill in ‘blind spots’ but it does not satisfy this legal requirement.

There is a wide range of tow mirrors available, from the simple clip-on variety to the Clearview mirrors, which are specifically designed to replace the factory mirrors of certain 4WD models. The law doesn’t care which type you use, so long as it allows you to see clearly along both sides of the van.

Having said that, some tow mirrors are vastly superior to others. Cheap, flat mirrors that simply clip or strap to your existing mirrors are likely to be blown in by passing road trains, while mirrors that strap to the door of the vehicle are likely to scratch your duco. When choosing tow mirrors, it often pays to spend a little more up front to avoid future frustration.

5. I SHOULD FILL MY WATER TANKS BEFORE TRAVELLING

Yes, you should. Not only is it a good idea to travel with as much water as possible, especially in remote areas, the extra weight will lower the van’s centre of gravity, thereby increasing its stability under tow.

Most caravan water tanks are not fitted with baffles, which means in a half-full tank, the water is free to slosh around. In a towing situation, this movement has the potential to increase side-to-side movement of the van.