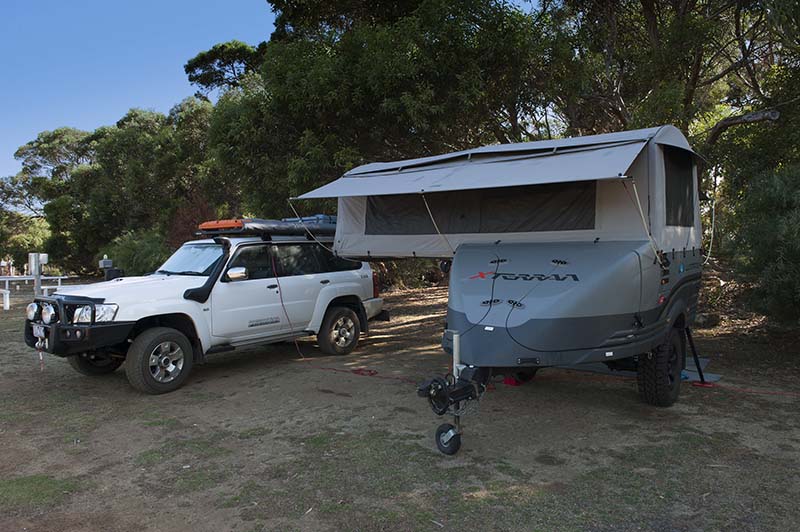 The first Ultimate camper trailer we ever saw was in the Kimberley about 17 years ago. It came around a bend on an unsealed road, leaving Steve and I gasping and wondering what on earth it was. A boat? A UFO? It was beyond our imaginations.

The second Ultimate we saw was at a 4WD show in Melbourne. In those days, Michael Hackett, the designer and owner along with his wife, Wendy, was taking the Ultimate around to shows himself. With demonstrations every hour, we hung around for a while, watching the quick set-up and take-down time and chatting with Michael. When we began yet another lap around Australia in 2007 to write a series of 4WD touring books, we wanted an Ultimate but it was beyond our price range. Finally, in 2015, we had enough funds to order a new Ultimate Xterran.

The Ultimate is made in Moruya, NSW. There are a number of models that include various extras, but the fundamental design is the same for each of those models. We chose an Xterran, the most offroad of its campers. We ordered it with a few extras including a full rear awning, the galley shelf, the solar pack, the roof bar tracks and an upgraded hitch. While our camper was being built, we received specific instructions from Ultimate on how our vehicle should be wired to accommodate the electrical needs of the camper, including the electric brakes.

As part of the handover, you are assigned a person for the day who greets you when you arrive in the morning and begins the process of introducing you to your Ultimate. After a tour of the exterior and the underneath, it was time for us to learn how to set it up, take it down, put up awnings, access storage areas and drawers, level the trailer and so on. We went through this processes numerous times, and I have to confess that my head was spinning by the time we got to the electronic and electrical components, but any subsequent questions we have had have been answered fully over the phone by someone at Ultimate.
We drove away later in the afternoon with information overload, a few little presents and a bottle of champagne. It took several nervous set-ups and take-downs before we were comfortable with what we were doing, but 14 months later, we are experts and we are fully set-up with everything within about 20 minutes, or just 10 minutes if it’s for a one-night stay.

So, why an Ultimate? This camper, with its coil springs and hydraulic shock absorbers, will take you anywhere a high clearance 4WD will go. The truth is that other offroad camper trailers will too, but this one does it in comfort. For me, the advantage is that I can cook inside and we can then sit comfortably and enjoy a meal. There is actually a lot of counter space, which is an asset in my opinion.

The amount of storage in the unit is astonishing given its size, and the king-size bed is unique among camper trailers, let alone caravans. (The bed is composed of three foam mattresses that wedge firmly inside the lip of the bed area; when travelling they are stacked on top of the settee.) For Steve, the greatest advantage of the Ultimate is how easy it is to tow. It is light and narrow enough to not obstruct your view of other vehicles. I think what I enjoy most about the Ultimate is that once you are set-up, because of the height off the ground, you are often living among the tree branches, giving you the feeling of being in your own tree house.

We have found the secret to living happily in an Ultimate for extended periods of time is to take only what you really need. When checking out Ultimates at camping shows, or in the Moruya showroom, we were seeing empty campers, which made assemblage much easier and gave it an open, airy feeling. The reality is that the various bins and drawers are soon filled with food, pots, crockery and cutlery, first aid, spare torches and lights, linen, winter clothes, drinks, etc.

Our clothes are in two duffel bags that live along the side of the bed during the day, on the settee at night and on the floor under the mattresses while travelling. Everything fits together like a puzzle and anything that isn’t used regularly is given away or mailed home. Speaking of storage, the front nose cone holds a heck of a lot; but again, we try to be brutal about what we take and no matter how many times we downsize, we still have things we don’t use. We both hate clutter, so our motto is a place for everything and everything in its place.

While we love our Ultimate, it does have the same disadvantages of any camper trailer. On travel days, you still have to take it down in the morning and set it up in the afternoon. You are under canvas, which means that wind gusts are noisy and you are at the mercy of heat and cold. Rain isn’t too much of an issue unless you have to set it up or take it down in it: we have been in torrential wind and rain over several days and not a drop of water got inside the camper. You are also at the mercy of other campers – inconsiderate neighbours who stay up until all hours of the night, or who allow their kids to run screaming through the campground, are wildly annoying.

While the Ultimate design takes maximum advantage of the space, it is still a small space. The bed area tends to bounce a bit; we find that the firmer the legs are set on the ground, the less it bounces. While the unit is dust-free when closed, dust still accumulates at the back, which is the entrance to the trailer. We have a small blower that allows us to clean things up a bit before we open up. Because the camper opens to the right, it can be a challenge to find a suitable site when staying in caravan parks (this isn’t an issue when bush camping). We always ask to see the available sites, and we look for one that will accommodate our van’s width and our height. As far as the design and construction of the Ultimate goes, I can’t think of a single thing to say against it; the components are excellent too, though the legs are fiddly to get just right.

This camper is designed for offroad adventures, so if you are sticking only to the bitumen and caravan parks, it might be more than you need. Take it offroad, though, and it will gobble up tracks with ease. Go to a camping show, or the Moruya showroom, to see the unit and the set-up and take-down demonstrations.

Think carefully about the extras you want or think you need as these can drive the price up rather quickly. We are happy with the extras we have; I am thinking of ordering a couple of clear windows that can be attached on rainy days to allow light in. If you’ll be stretching your budget to the max to buy a new Ultimate, then consider a used one from the Ultimate factory that includes a warranty and instruction on delivery. Have a close look at the website and view the video links on there, the FAQ, the galleries of the various models, the brochures and the user manual flipbook.

Do a Google search of Ultimate images and also a YouTube search. Buy the custom mattress covers and sheets that allow you to leave the bedding on when travelling and use a doona for a cover: go European style!

If you are like us, and the other Ultimate owners we have met, you will love the unit. One word of warning though: you will attract a lot of attention and plenty of other campers who will want to have a sticky inside. Most say the same thing: I want one! 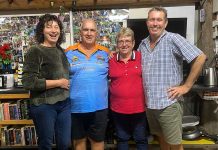