A couple of months ago, GoRV announced the launch of Trakmaster Caravans’ new direction: a range of fixed-format vans designed to make the buying decision as easy as possible.

The reasoning was simple. As a custom caravan manufacturer, Trakmaster was potentially losing the business of people who didn’t want or need a customised rig, or who saw the process as difficult or too time-consuming.

Now under the ownership of Gason, a company that makes agricultural machinery and other equipment, Trakmaster’s chartered course is one of significant growth. A range of fixed-design caravans, where what you see is what you get, is a key plank in the strategy.

The first van in Trakmaster’s line-up to get the set-formula treatment was the all-new Flinders, the timber and aluminium offroader recently featured in GoRV. The next one, which had just rolled off the production line when we hitched it up, is the Pilbara S Series 16ft 10in van. 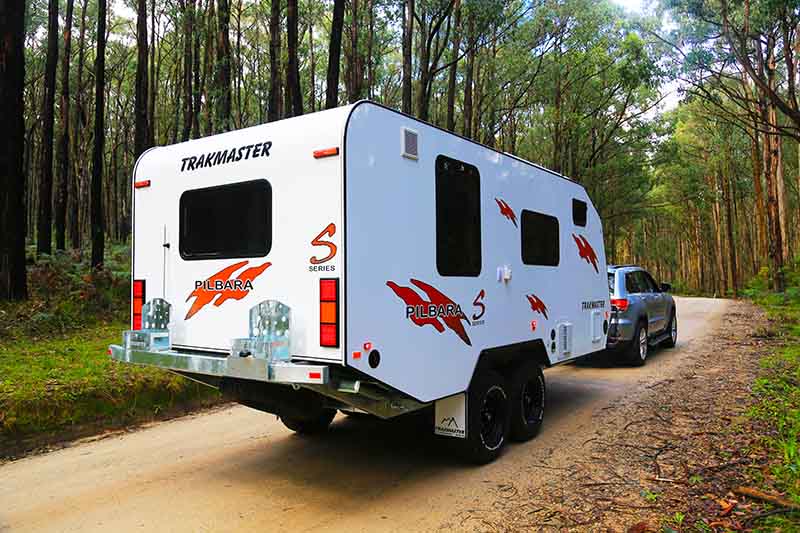 About 300mm longer than its Flinders stablemate and 150kg heavier, the Pilbara S Series is only available in fibreglass sandwich panel construction. And notwithstanding the fixed-format design, this van is still every inch a Trakmaster, inside, outside and underneath. The fibreglass wall panels are as smooth as they’ve ever been, the underside of the van appears as well-protected, and the internal construction seems as strong as its customised forerunners.

The Pilbara S Series is fitted with dual 82L fresh water tanks, with provision for future fitment of a grey water tank. The water tanks are plumbed independently to separate isolating valves under the sink. I liked how even the water dump valves on the tanks are protected from errant stones, etc., by a gal-steel stoneguard.

The suspension is Trakmaster’s own ‘Trak-One’ trailing arm independent coil system, with twin shock absorbers per wheel. No complaints here – this system has developed a reputation for solid performance over the years. 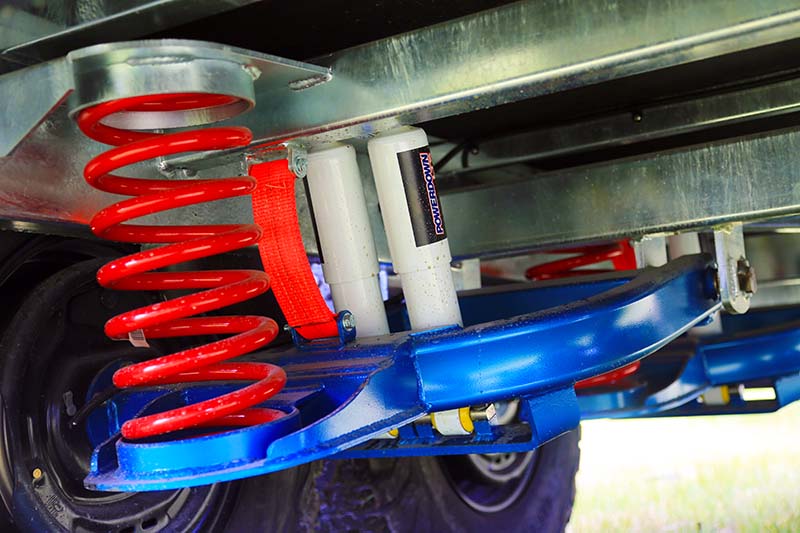 Up front, you’ll find a D035 offroad coupling, a mesh stoneguard protecting dual 8.5kg gas cylinders (which are further protected by an upright sheet of galvanised steel), and a deep front boot. A freshwater tap is sensibly mounted on the inside of the A-frame (rather than the outside, where it would be more vulnerable to stone-strike). The external storage situation is augmented by a pole-carrier, which is accessible both sides of the van. It’s ideal for annexe poles, fishing rods and the like.

The nearside of the van is relatively sparse. I mistook the only hatch for an external entertainment box; it is, in fact, a service point for the 146L Evakool compressor fridge-freezer. Because this fridge is powered by the onboard AGM deep-cycle batteries, the Pilbara S Series has dual 150W solar panels. It’s also fitted with a Redarc battery management system, meaning the batteries will automatically charge in the most efficient way possible, whether that’s by solar, from the tow vehicle, or when you’re plugged in at the caravan park. And should you bring a portable set of solar panels to supplement the existing setup, there’s a dedicated ‘solar socket’ on the nearside of the van to plug into, as opposed to plugging into an Anderson plug.

At the back of the van, you’ll find a couple of jerry can holders on the rear bumper (there’s one on the drawbar, too) and a spare wheel mounted to the rear cutaway on a ratchet mechanism, so you can lower the spare without doing your back.

Externally, the Pilbara S Series is a neatly presented, sturdy offroader. Despite being slightly heavier and longer than the Flinders, it’s still not prohibitively large for touring tight tracks en route to remote campsites.

The Pilbara S Series is available in a number of lengths, from 15ft 10in to 19ft 6in. According to Trakmaster, the layout that comes with our 16ft 10in Pilbara S Series is the company’s most popular. It is the result of years worth of customer feedback, and I can see the appeal. There’s plenty of room in the front kitchen, it’s still roomy amidships, and even the bedroom doesn’t feel too poky.

The kitchen is equipped with a four-burner cooktop, griller and oven (you can have a microwave in place of the oven, however), a reasonable amount of storage, a small amount of bench space, and a slide-out pantry. The pantry is part of a cabinet immediately to the right of the entrance. It slides out into the entrance step, which some might find annoying when it comes to entering or leaving the van; however, it does make use of an otherwise ‘useless’ area. The Redarc BMS and water tank level displays are mounted in the cabinetry above, near stereo/CD player.

There’s a few lockers above the offside L-shaped dinette but only a small amount of storage beneath the cushions, as this is where the Suburban hot water service and battery management system are kept. The cushions, by the way, are quite easy to remove and re-fit – this sounds like a small point, I know, but I’ve seen my fair share of difficult-to-remove dinette cushions that makes accessing the storage space beneath an exercise in frustration.

Opposite is the fridge/freezer, with a 12V and TV antenna point above. There’s no swivel arm here but the shelf above the fridge would work nicely as a stand for the telly.

A moulded-fibreglass bathroom has been tucked in the front offside corner, between the kitchen and dinette. It has a Thetford cassette toilet, variable-height shower rose, etc., but I particularly liked the external service port to the shower’s plumbing. Should a hose or seal spring a leak, you’ve got easy access – not something you’ll find on every van, I can assure you.

Finally, the bedroom. Because of the upswept rear, the under-bed storage space is somewhat reduced; however, there is still plenty of useable space here. The meranti-framed bed measures 1.95×1.52m, so it’ll suit the tall timbers among us.

The wardrobes are reasonably deep, each with three shelves, a drawer and cupboard below. And there are also three overhead lockers. For two people, I don’t see bedroom storage being a problem. 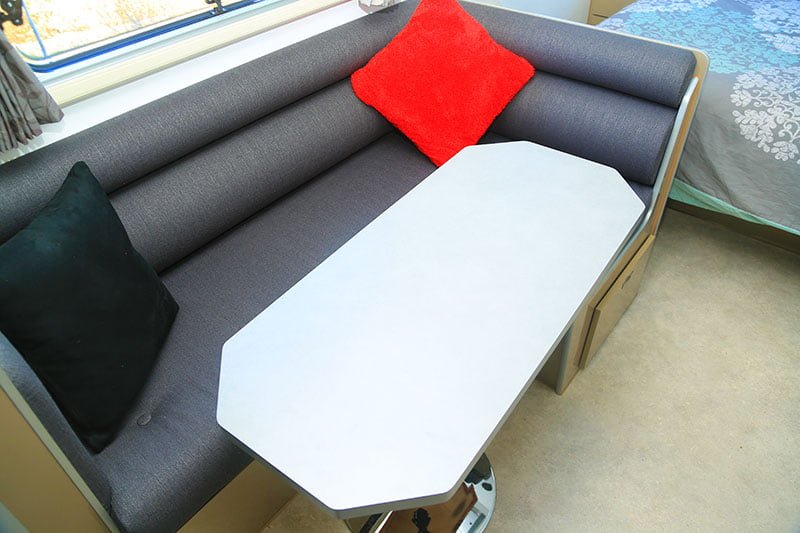 The van also gets a Truma Aventa roof-mounted reverse-cycle air-conditioner, double-glazed windows with integrated block-out blinds and flyscreens, a Winegard TV antenna, and more. Naturally, you can choose your own colour scheme and option in some extra accessories, but the van can’t be lengthened, nor can you alter the layout. If you would prefer a shorter Pilbara S Series, you’d have to opt for the 15ft 10in model, or the 19ft 6in model if you want a longer van. But all of this is the point. It is a what-you-see-is-what-you-get caravan. And what you get is a serious offroader that would be equally at home in the remote north-west as it would be in the Tassie bush.

Weighing in at 2432kg unladen, it’s not an unduly heavy caravan, though it’s no light-weight, either. It’s a job for a fairly serious 4WD wagon or dual-cab ute, not only because of where this van is designed to go, but the 3200kg ATM puts it beyond the Prados and other mid-weight tow vehicles.

It bears repeating that although the Pilbara S Series is a fixed-format caravan, it still has Trakmaster DNA. The company’s offroad manufacturing pedigree and reputation are on show inside and outside this caravan.

Microwave: Available in place of the oven 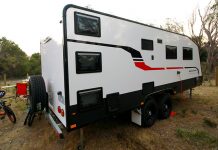 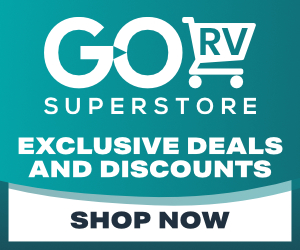