Myth 1: It is fine to have end weight (like toolboxes and spare wheels) as long as the front end is heavier than the back.

Reality: This is commonly believed. It is a very dangerous myth as it results in oil tanker-like handling. Some are normally ultra-stable but if a sufficient side force does cause one to yaw (snake), that end mass that kept it seemingly stable may now not be correctable. If that occurs, jack-knifing is virtually inevitable.

Reality: Desirable tow ball mass is more an issue of where mass is along that caravan. That 10% is easily remembered and generally adequate. A short centre-heavy caravan, however, needs far less than does a long end-heavy caravan. Camper trailers prove this. Most are a mere four metres, yet some weigh close to two tonnes. Almost all are ultra-stable; however, their recommended tow ball mass varies from 3% to an extraordinary 20%.

Myth 3: Payload should be evenly distributed along the caravan’s interior.

Reality: Unless the unladen trailer has too low tow ball mass (and is thus dangerous to tow) all payload should be positioned such that heavy stuff is as close to the axle as possible.

Myth 4: It is just fine to load up the A-frame as long as the tow ball mass does not exceed the tow hitch’s or tow vehicle’s allowable maximum weight.

Reality: Highish tow ball mass is fine subject to the above constraints, but should never be achieved by loading up the A-frame, only by having really heavy stuff just ahead of the axle/s.

Myth 5: People carry on about the various alleged effects of weight. However, that’s just their opinion. The real world is quite different — all that’s needed is everyday common sense.

Reality: This is the ongoing bane of many an internet forum. People are entitled to form their own ‘opinions’ but not their own engineering facts. The effect of weight and mass is totally basic physics understood and accepted since 1687.

Myth 6: Weight-distributing hitches are not needed if air bags or heavier springs are fitted to the tow vehicle’s rear.

A weight-distributing hitch is, in effect, a semi-flexible beam that transfers the imposed weight back onto the tow vehicle’s front wheels (and marginally to the caravan’s). In effect, it levers them back down. Users need to be aware, however, that a weight-distributing hitch cannot compensate for the often high side forces on the tow vehicle when the caravan yaws. As such forces upset the rig’s balance, US makers now recommend that only 50% front axle weight restoration be used.

Myth 7: It does not matter where anything heavy is located along the length of the caravan. The effect on stability depends only on that weight.

Reality: This is a very common myth. It overlooks that a caravan in use is (just as is a see-saw) a beam pivoted close to its middle. While that weight clearly remains the same wherever placed — its effect, however, does not. An example of this effect is a 150 kg man sitting one metre from a see-saw’s pivot. That 150 kg is fully balanced by a 50 kg child on the other end three metres from the pivot.

It is for this reason that it is not clever to locate tool boxes and spare wheels on the outer rear wall via a heavy bumper bar, etc. It may all weigh (say) 100 kg but the effect if three metres back is that as if it were 300 kg. And no tow ball at that end to restrain movement.

Myth 8: I read many an argument that high end weight makes a caravan behave totally differently from one that has that same weight centralised. I have yet to see that proved — and will not believe it until I do.

Reality: Right! Here’s how. Take a full bottle of wine (or water) in each hand, and then hold them close together at chest level. Then swing around. You’ll find you can do so with ease. Then hold them at arm’s length and try that swing again. Take care or you may fall over.

If you really want to test that with more weight, do so with a bar bell and two 5 kg weights. Have weights initially central and then try it by progressively moving them toward the ends.

Myth 9: Some people who should know better insist that a laden car must be heavier than the laden trailer it pulls. That’s rubbish. I’m a truckie and have pulled semi-trailers of two or more times the weight of my Kenworth for years. What’s so special about caravans?

Reality: Until 1920 or so, most commercial trailers were towed (as are conventional caravans today) via a hitch that is well behind the tow vehicle’s rear axle/s. Following ongoing rollovers it was realised that as the trailer yawed in one direction, it caused (not just allowed), the tow vehicle to yaw in the opposite direction. And that such movement built up. It was also found that the severity of this effect was very much related to the length of that hitch overhang.

The Fruehauf company realised that by mounting the tow hitch directly over the tow vehicle’s rear axle, this effect was totally overcome. Within a year or two, the heavy transport industry worldwide moved to the fifth-wheel semi-trailer configuration. And close to 100 years later it has never reverted.

Apart from fifth-wheel versions, the caravan industry has, by and large, yet to understand the full implications of that overhang. Its adverse effects, however, are reduced by having a tow vehicle heavy enough to resist the inevitable disturbing forces. That in Australia has yet to happen, but most of the EU now limits caravan weight to about 80% of that of the trailer (and limits speed to 80 km/h).

That’s ‘what’s so special about caravans’. It is that typically 1.25 metre of overhanging hitch and tow vehicles that are far too light.

Myth 10: Regardless of how I load my caravan, it has been totally stable for many years.

Reality: That a rig is stable in normal use is good but that which really matters is how it behaves in an emergency such as swerving hard and braking to avoid a head-on crash. This introduces extreme forces that are way beyond everyday usage. There is no safe way to test this. All I can suggest is to load that caravan such as to have it centre-heavy (but with still about 10% tow ball mass) and towed by a vehicle of at least its own weight. All this is speed-related — never exceed 100 km/h. 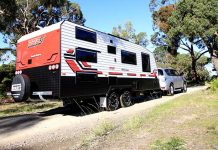