Salute Caravans is a relatively new name in the Australian caravan industry. That said, the team at the helm has been building caravans for about seven years. It’s a family enterprise with four models to its name. Among them are the 19ft 6in semi-offroad Garrison, the 20ft 6in semi-offroad Sabre, and the most popular of the fleet, the 22ft offroad Governor.

The Avalon, our review van, is Salute’s family offering. This 21ft 6in (external body length) is not a lightweight; however, it has a lot in its favour. 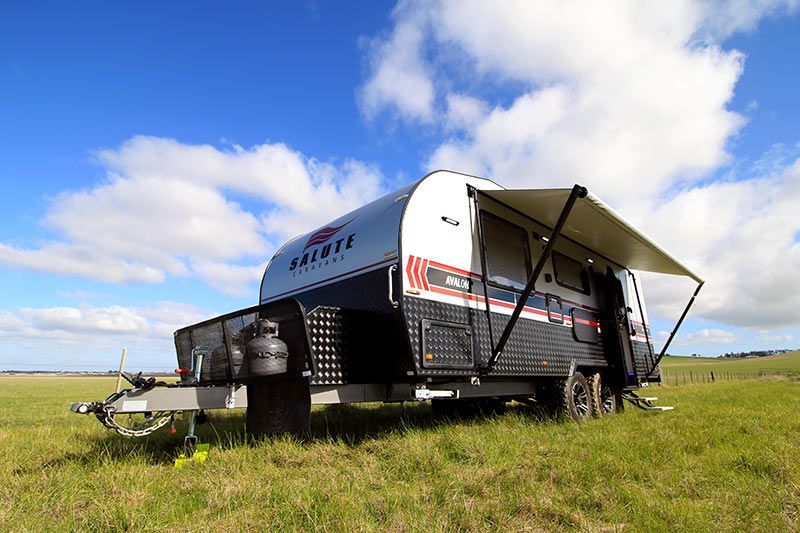 On an unseasonably warm day, we headed north from Salute Caravans dealer Melbourne City Caravans to see what this van was all about.

The Avalon’s layout put the van immediately in my good graces. Often, a family van will cram in a rear separate kids’ bedroom, with bunks on the offside and a bathroom on the nearside. It works, but sometimes it leads to bunks that would be too short for a tall teenager. 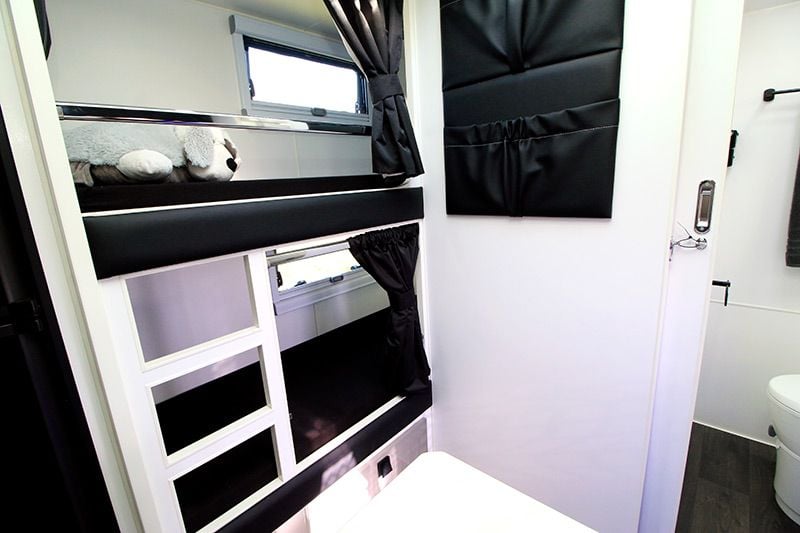 The Avalon takes a different tack. Instead, it sports particularly long bunks, each with a DVD player and dual 12V/USB connections, in the offside corner. Each chromed bunk rail is removable, too, which should make it much easier to tuck the little ones in at night.

The position of the bunks allows for a rear corner bathroom. It offers a cassette toilet, vanity and moulded-fibreglass shower, as well as all of the space you’d expect from an ensuite that ran the entire width of the van. 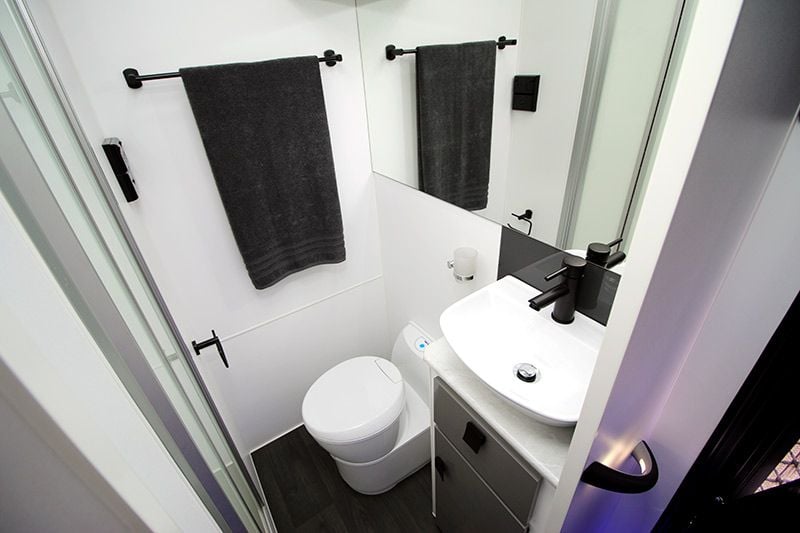 The 3kg front-loading washing machine is mounted within some cabinetry in the entryway – the shelf above should come in handy for holding the washing basket, etc.

Another feature of the layout: the large nearside club lounge, which should easily seat the entire family. It has also been fitted with a swivel table, allowing you to position the table to suit. This table can drop down to form the base of an extra bed.

The kitchen fills out the space opposite the dinette. It comes with a four-burner cooktop, griller and oven, with a hinged section of bench above to maximise bench space. In the lockers above – all locker doors are on piano hinges – Salute has centralised items such as the 12V fuses, the BMPRO Genius battery management system, hot water switch and water level indicators. The result: clean, uncluttered walls throughout the van. 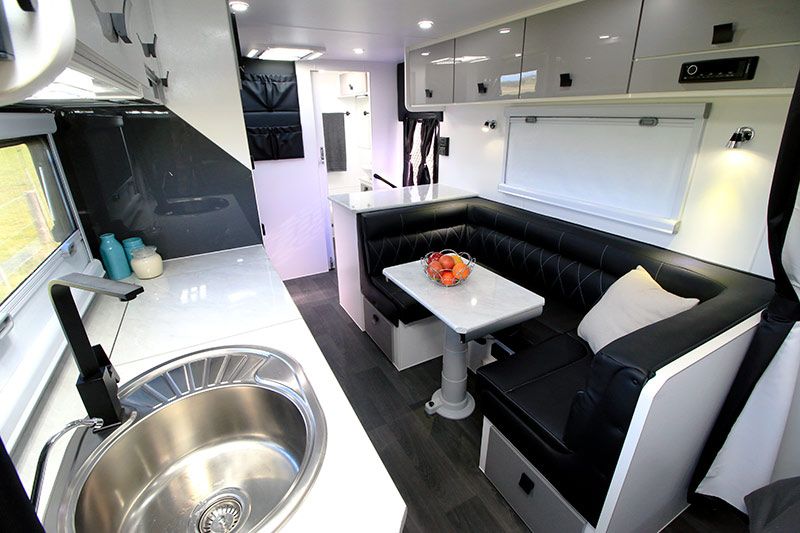 The range of cupboards below the kitchen bench includes a pull-out pantry with two shelves – standard fitment for most vans – however, it has to be said that a lot of silicone was used to seal the hole where the grey water pipe and other lines exit the cabin through the floor. On the positive side, nothing will get through!

The main bedroom – complete with privacy curtains – features a bedhead of overhead lockers and side wardrobes, each of which has a niche with 12V/240V/USB point so you can keep your devices, etc., charged.

A swivel bracket is mounted to the overhead kitchen cabinetry at the foot of the bed, on the offside. It’s perfectly positioned for watching TV from bed and the swivel arm should allow you to watch from the dinette, too. Of course, a 12V point for the TV is positioned close by. 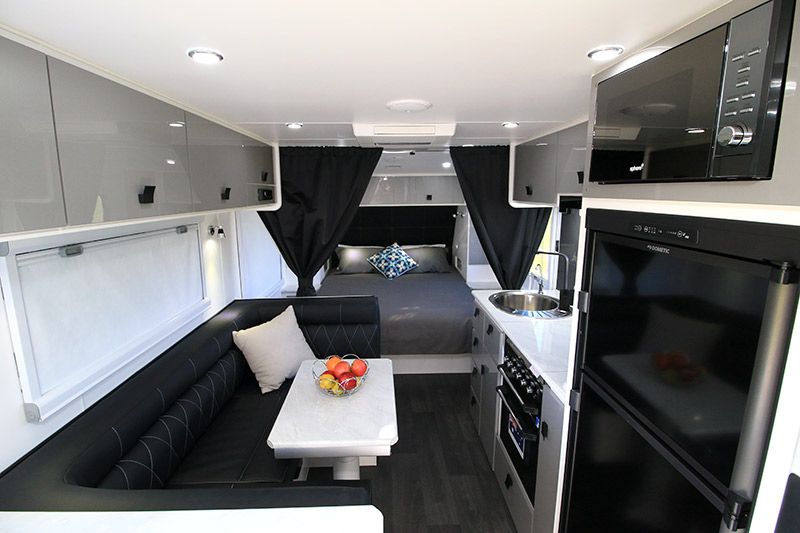 The bed base lifts on gas struts to reveal a limited storage space beneath. It’s limited because the housing of the external tunnel boot impedes the under-bed space; however, there’s still room for an array of gear and equipment.

The Avalon also comes with a 185L fridge-freezer with microwave above, as well as an RV Wi-Fi system, which is fitted in an overhead cabinet next to the microwave. It’s powered by a nearby 12V point. In short, the van comes with a long list of standard equipment, including a Dometic Harrier reverse-cycle air-conditioner.

The van’s optional curved front profile (two other front profiles are available, should you not like this one) lends the van a real sense of space and, overall, I found the interior of the Avalon very appealing.

AROUND THE SALUTE CARAVANS AVALON

The Avalon is built on a 4in DuraGal RHS chassis with a 2in raiser and 6in A-frame. The frame is made from meranti timber clad with composite aluminium and black checkerplate. 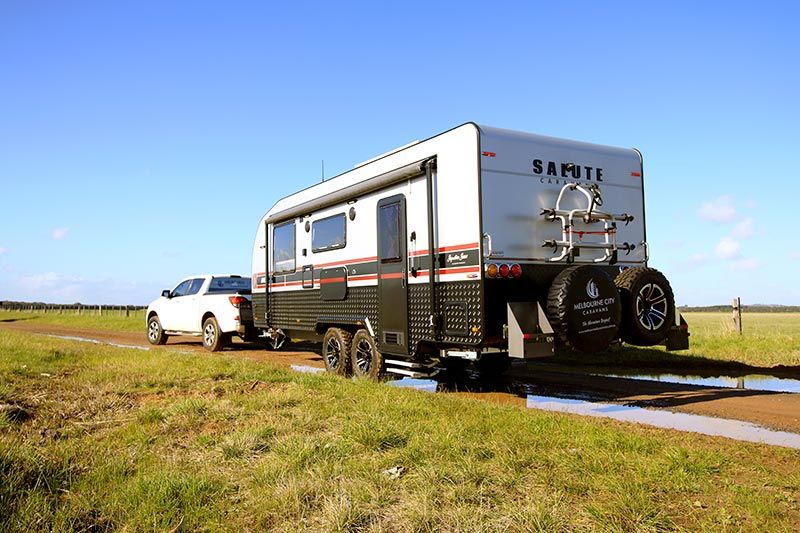 It rides on 16in alloy wheels with mud terrain tyres (perhaps overkill, since this is not a full offroad van) and Al-Ko’s offroad Outback independent coil suspension.

Up front, a DO35 coupling is fitted, along with a mesh stoneguard, two 9kg gas cylinders and a storage box fabricated from black checkerplate. A freshwater tap is fitted to the A-frame, too. 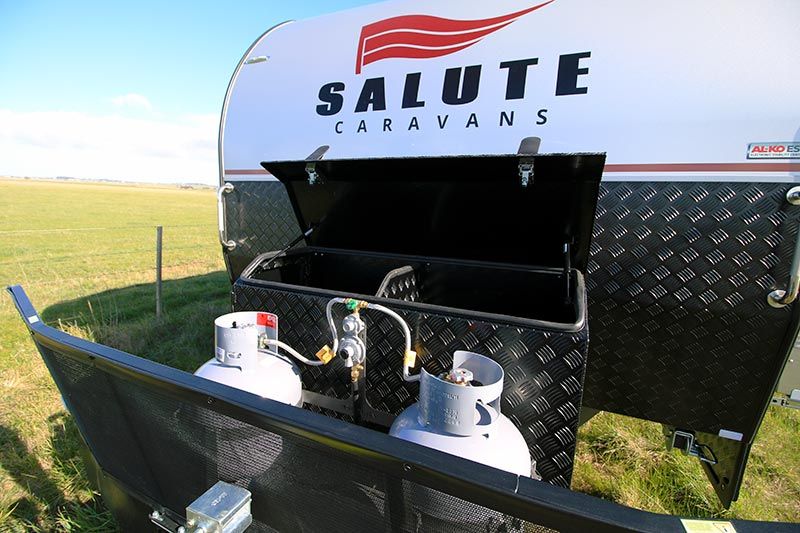 Other features include a nearside ‘entertainment locker’ complete with 12V/240V powerpoints, TV mount and relevant connections, a roll-out awning, rear bike rack (this is a family van, after all), two spare wheels mounted to a three-stay bumper bar, and a slide-out barbecue (with nearby gas bayonet) in a tunnel boot.

Although the barbecue prevents access to the tunnel boot on the nearside, you’ll be able to get to your gear thanks to the offside hatch.

Underneath, Salute Caravans has fitted two 95L fresh water tanks forward of the axles and one 95L grey water tank to the rear. While the brass mains water inlet is mounted out of harm’s way behind a chassis rail, the grey water tank’s outlet is not – a stoneguard or similar would be welcome here. 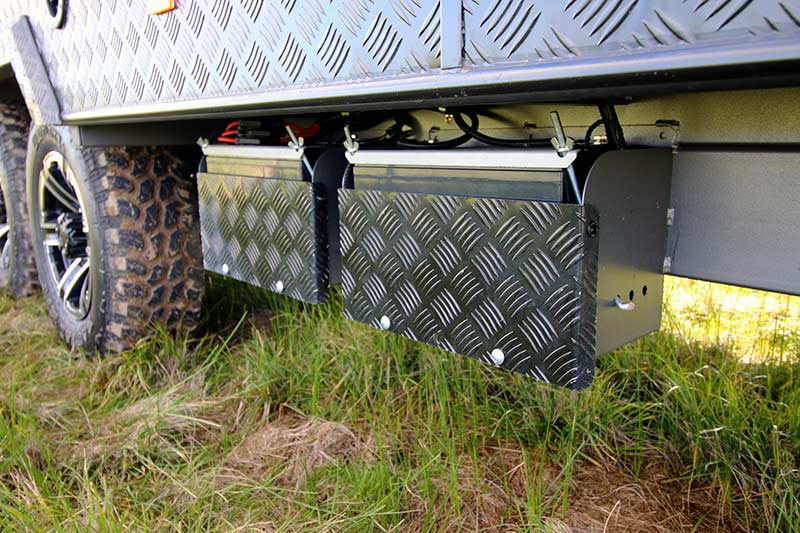 In terms of 12V power, the Salute Caravans Avalon gets two 120Ah AGM batteries (with a 40A charger) fitted inside two checkerplate boxes mounted to the offside chassis rail. There is also two 160W solar panels mounted to the roof – it appears to be a good 12V setup for lengthy free-camping stays.

The safety features of the van include Al-Ko Electronic Stability Control and a Safety Dave rear-view camera.

The Avalon has a Tare of 2700kg, ATM of 3500kg and payload capacity of 800kg. As such, it calls for a sizeable 4WD tow vehicle, such as a Jeep Grand Cherokee. 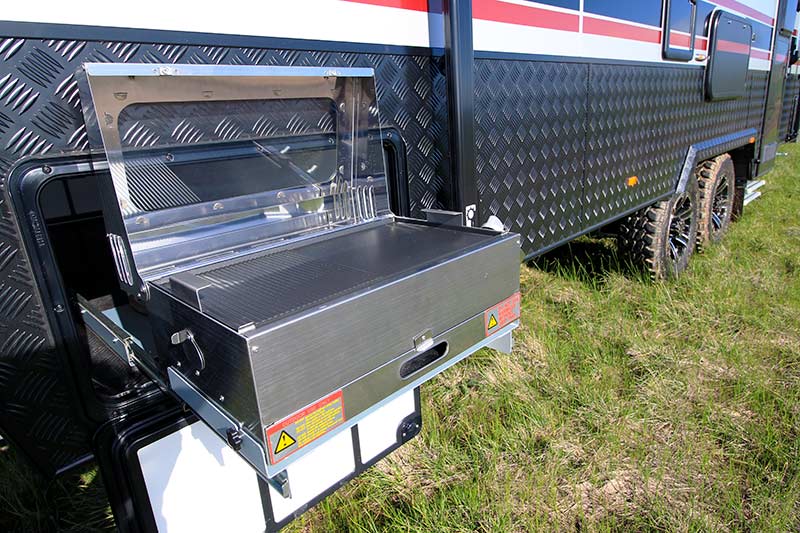 At $67,990 (ex-Victoria), it appears to represent good value for money, especially when you consider the inclusion of features such as the battery management system, RV Wi-Fi, ESC, independent suspension and more.

Suitable for extended highway and rough-road touring, the Salute Caravans Avalon is an intriguing proposition. And I, for one, really like the curved front.

Chassis: 4in DuraGal (with 6in A-frame)

Battery: 2x120Ah AGM with 40A charger and BMPRO Genius BMS