When I first laid eyes on the Royal Flair Piazza Sky-Deck, I was impressed. This was back in 2013. I had taken it for a test tow along the Great Ocean Road, spending many evenings lapping up the views from the ‘balcony’ that lowered over the drawbar.

I believe now, as I did then, that the Royal Flair Piazza Sky-Deck offers one of the most practical, liveable caravan layouts in Australia. The concept hasn’t really changed since then, though aspects of the build have, and Royal Flair has added vans of different sizes to the range over the years. 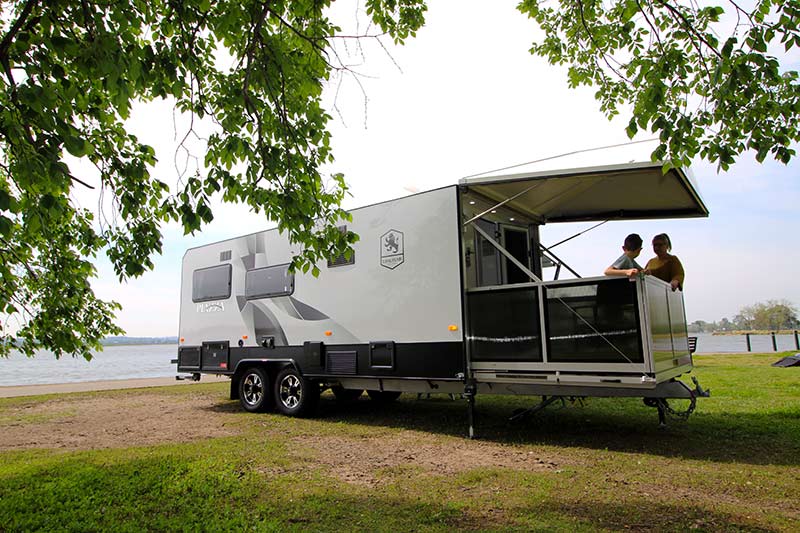 At heart, however, the Piazza Sky-Deck remains a caravan with a genuine point of difference. After all, how many other vans have you seen that utilise the empty space over the drawbar in such an innovative way?

INSIDE THE ROYAL FLAIR PIAZZA

The Royal Flair Piazza Sky-Deck is available in sizes from 16ft 6in to 24ft. Our model was the 18ft 6in variant, at the lower end of the scale. But don’t be deceived. Though it has a relatively small footprint on the road, intriguing internal design traits – as well as the Sky-Deck – give it the living space of a much larger rig. 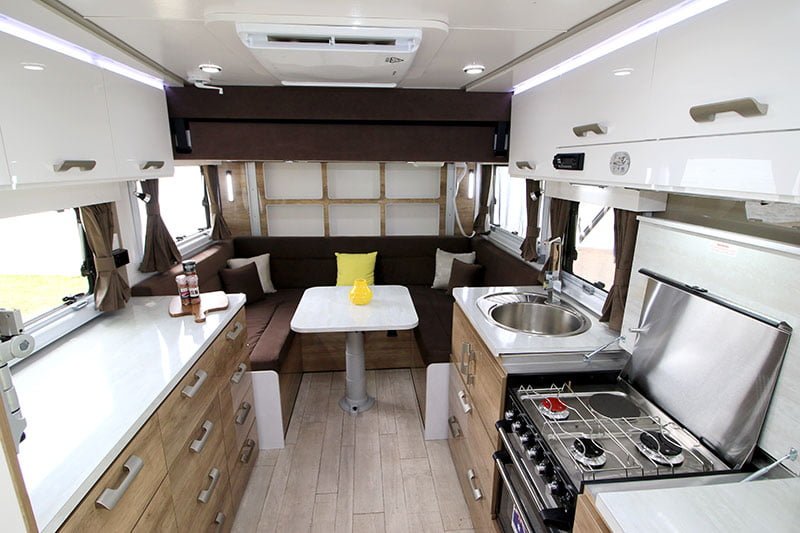 Both the 16ft 6in and 18ft 6in Royal Flair Piazza Sky-Decks come with a rear club lounge (yes, a club lounge in a 16-footer); however, a great deal of space is saved by the fact the queen-sized bed is electrically lowered over the lounge.

When it’s time to hit the sack, push a button built into the kitchen’s overhead cabinetry, and the bed will lower from the ceiling, flush with the seat bases of the dinette (though you’ll also need to lower the dinette table). 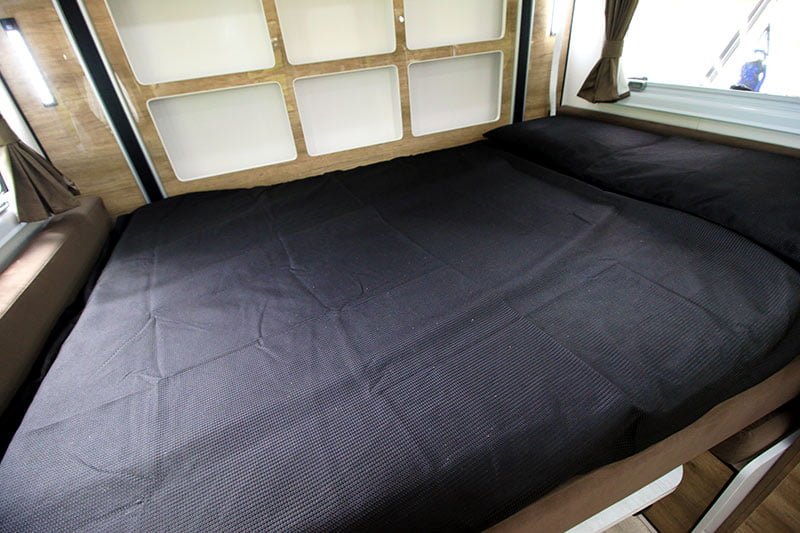 This is a design found in some of Royal Flair’s Family Flair models and, in my view, it’s rather ingenious. The queen bed, after all, takes up precious real estate in a caravan. By shifting it to the ceiling during the day, in an east-west orientation, the layout can be opened up for endless purposes.

Instead of traditional wardrobes, which wouldn’t be practical here, Royal Flair has fitted a series of open storage cupboards on the rear wall which can be accessed whether the bed is raised or lowered. Clever.

The nearside kitchen is replete with drawers, cupboards and overhead lockers, with each aperture neatly edge-banded. Not a splintery edge or join to be found. It is fitted with a stainless steel sink, cooktop, griller and oven, and more. 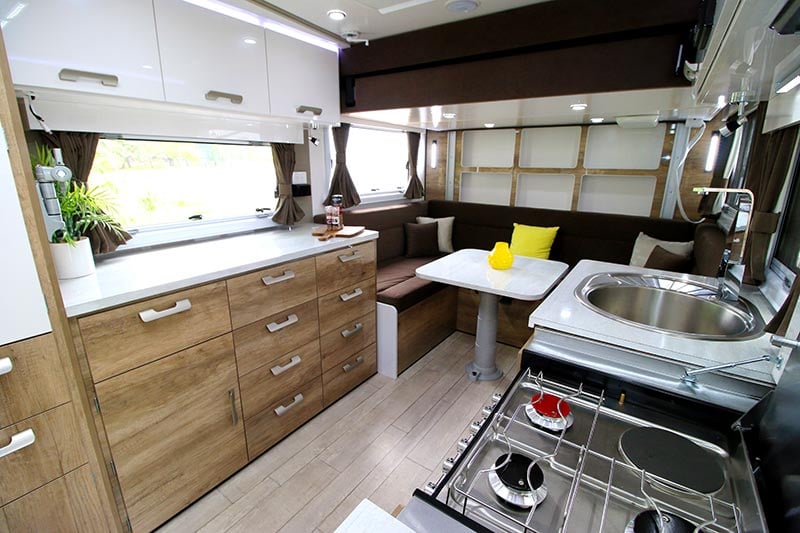 The offside, meanwhile, is fitted out with a generous storage unit that includes a range of drawer and cupboards. One such drawer, I noticed, hides a secondary drawer for cutlery. Nice.

A generous 184L Thetford fridge is fitted forward of this unit, while opposite, near the van’s entrance, a unit hides a top-loading washing machine. By gently pressing the edge of the bench, the bench will slide out to offer space to hold your laundry basket. And I’ll point out that to fit a washing machine on top of all this generous bench and storage space in a van classified as 18ft 6in is rather impressive. 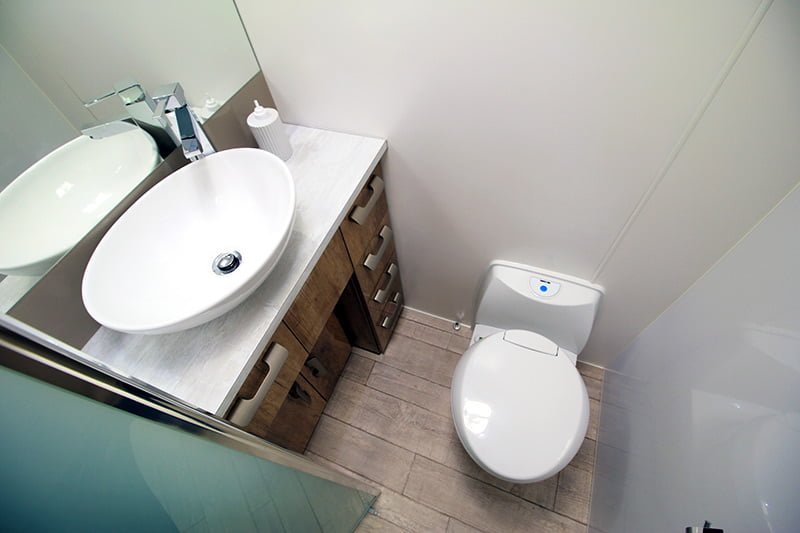 And then there’s the fact it also has a split bathroom, with a toilet and washbasin on the offside and a separate shower – a fully moulded fibreglass cubicle – on the nearside. These form a sort of ‘corridor’ through to a front door that provides access to the Sky-Deck.

Inspecting this van’s internals, I could find nothing to meaningfully criticise. Often, there’s poor silicone work or dodgy joins to cause me to frown. However, the attention to detail is high indeed.

Among the other features, you’ll find a BMPRO BatteryPlus35 SR battery management system and Trek digital display, which provides at-a-glance information on the van’s levels (water, battery voltage, etc.), a reverse-cycle air-conditioner, dual 105Ah deep-cycle batteries, a microwave, CD/MP3 player with four speakers, and of course an array of 240V/12V powerpoints. Loads of storage space, too.

You’d be forgiven for thinking the Sky-Deck takes a long time to set-up; however, it’s literally a one-minute job. Just release the catches of the nose cone and it will automatically raise to become the roof. 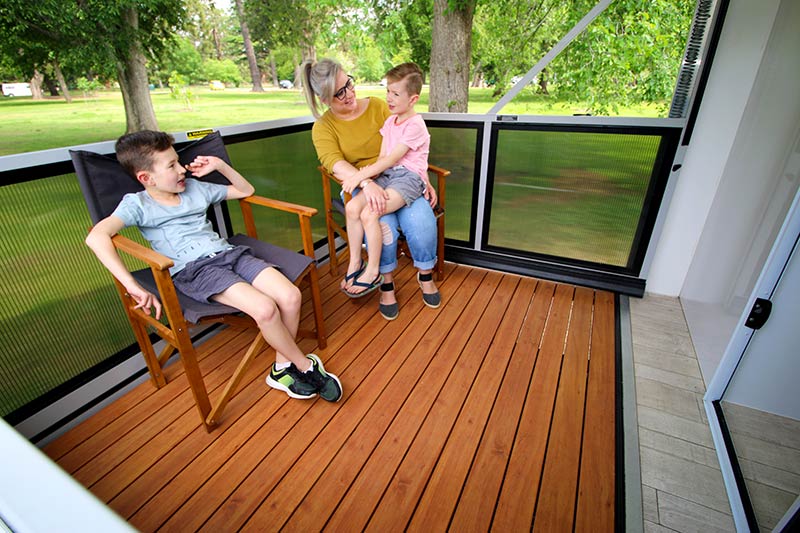 Then lower the base – which is fitted with insect screen to prevent unwanted guests coming up from beneath the slats – and swing out the walls and locking them into position. Truthfully, I found it easier to set this up than any manual awning.

A number of hooks are fitted to the base of the Sky-Deck, too, providing a place to carry bulky items when this base in the vertical position.

The Sky-Deck is also equipped with a TV mounting bracket and relevant antenna/12V connections, in addition to cafe blinds to close off the ‘balcony’ area in cold weather, makes it a truly unique, useable space in all conditions. 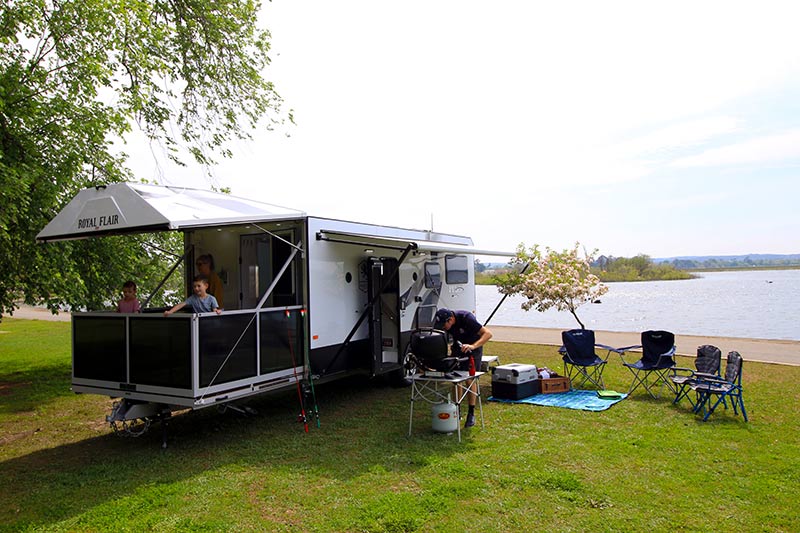 Given that the drawbar needs to remain clear for the Sky-Deck, the dual gas cylinders are housed in an offside-rear locker. Obviously, a traditional front boot isn’t an option, while a front tunnel won’t work, either, due to the front split bathroom. However, Royal Flair has fitted a gal-lined rear tunnel boot.

One compromise of this arrangement, however, is that the rear awning arm blocks quick-and-easy access to the nearside tunnel hatch. It needs to be unclipped, or the awning fully opened, first. 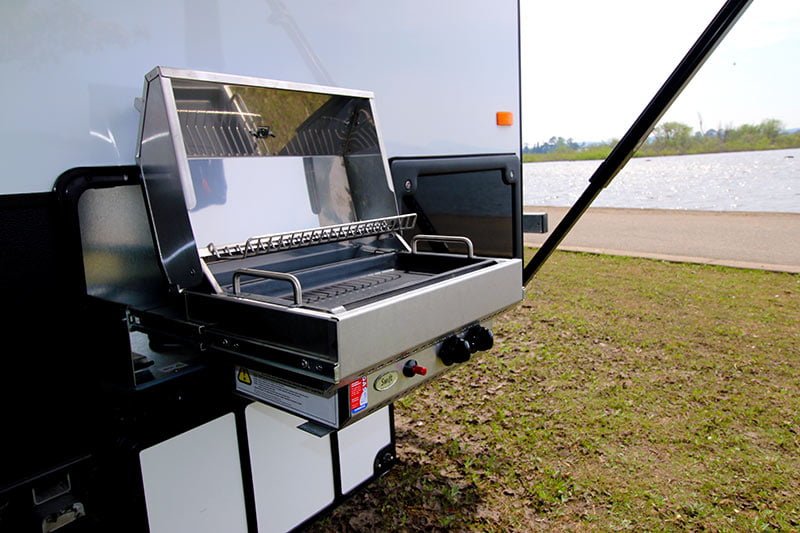 While there’s plenty of other features to point out, from the drawbar-mounted freshwater tap to the dual 95L tanks, it’s the way that Royal Flair builds this van that intrigues me the most.

Rather than a traditional meranti timber frame, it is made from one-piece, 20mm marine-grade plywood, which is clad in 3mm composite aluminium. The result appears to be a sturdy, strong caravan.

Underneath, it rides on standard tandem-axle leafspring suspension and 16in alloy rims, with a SupaGal chassis. 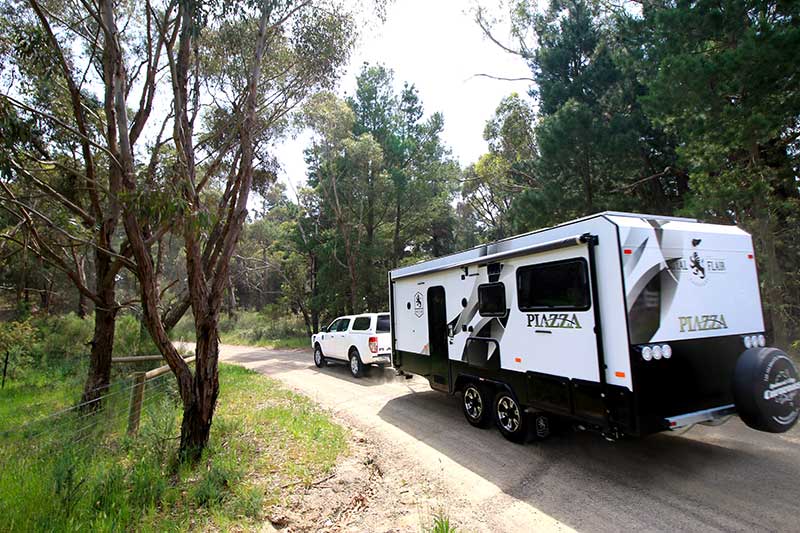 Compared to other vans in its size class, the Royal Flair Piazza Sky-Deck is on the heavier side, at 2739kg Tare, and its ATM of 3239kg puts it out of range of mid-size 4WDs, such as the Ford Everest. A 3500kg-rated tow vehicle, such as the Grand Cherokee, would be the best bet.

The Royal Flair Piazza Sky-Deck is an attractive caravan, with a first-rate fit-and-finish, clever touches throughout – especially that elevated bed – and the Sky-Deck adds immeasurably to the X-factor. It is versatile, practical and, I suspect, it would make you the talk of the caravan park.