On what was one of Melbourne’s wettest and windiest days in spring, we hooked up the New Age Caravans Wayfinder camper and headed out for some fun, all the while hoping the weather might clear. Unfortunately, it didn’t. It was a good test for opening and closing the camper in the rain though!

Of course, the rain and wind just happened to be blowing straight in the front door the whole time – thank goodness I carry some towels in the Land Cruiser! 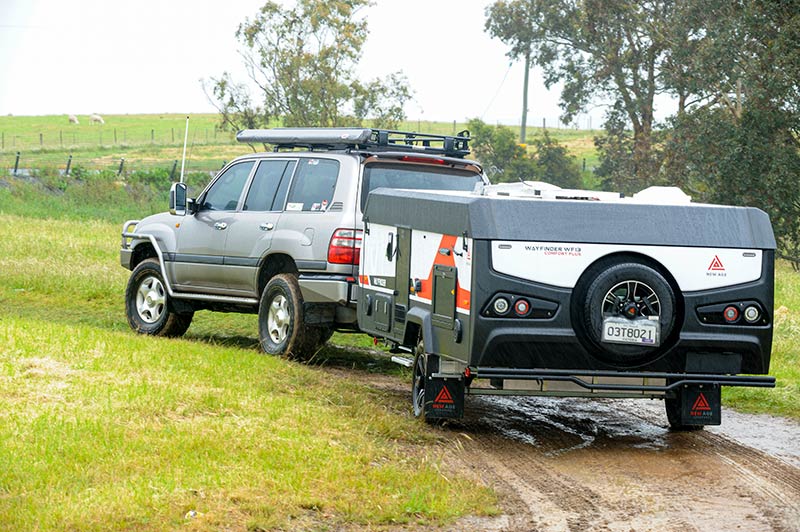 Not every review can be done under blue skies, so it was with the rain pouring down and streams of water running under the camper that we checked out this New Age Caravans Wayfinder WF13 Comfort Plus.

Let’s start with an exciting new feature of these models, the Jacka Electric Roof System (ERS). Instead of wind-up jacks and cables to raise the roof, it’s simply a matter of using an electronic controller in the front boot.

Push a couple of buttons, and the roof goes up and down. It can be stopped at any stage, and it’s straightforward to use.

The system has the ability to be lowered by releasing the electric motors, which will enable the roof to be closed, but it can’t be wound up manually.

The ERS has allowed for extra space throughout the camper’s interior, so New Age Caravans has revamped the cabinetry and included a kicker under the cabinets, which works well. It has also allowed some extra depth to the seating. Designed with input from the Walkinshaw team, the seating is quite comfortable.

There’s also more space for a larger microwave. I liked the LED strip in the centre of the roof, which will feature a dimmer control in future models. This light worked well on our gloomy day. The door features an improved locking system as well. 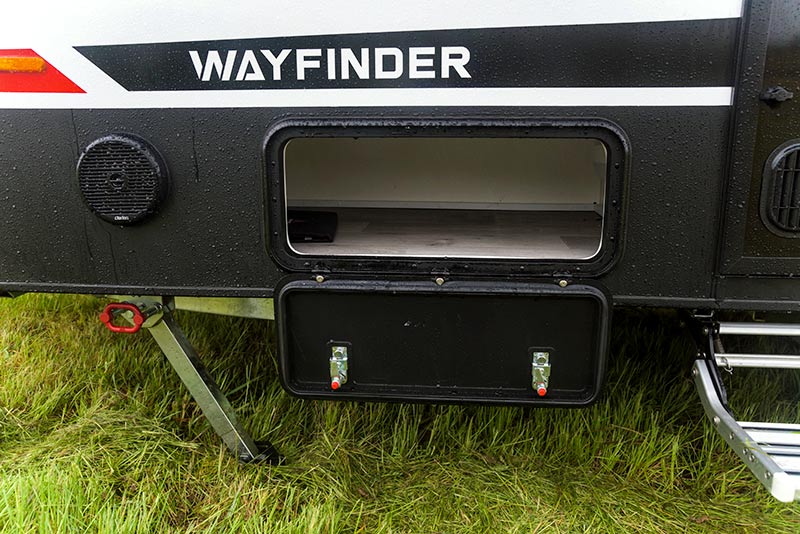 New Age Caravans has set up the WF13 with a basic package called the Comfort Plus. The mechanical basics of this pack include a 4in Walkinshaw-engineered hot-dipped galvanised chassis, slipper spring suspension system, manual pull-out step, an 80L water tank, a second 9kg gas cylinder, a 15in wheel and tyre package with 10in brakes.

A 50mm ball hitch, the ERS roof system, one-piece floor Raptor spray coating and new decals round out the body, while the spare wheel sits on the back on a neat tubular rear bar system. On the roof is a Winegard aerial unit and manual wind up hatch.

The body features aluminium composite panel sides and roof with ABS front and rear sections. The canvas is Dynaproof with flywire screens and clear PVC windows. The camper also comes with a set of roof support poles that can be used in severe stormy weather, adding another layer of protection for the occupants in these conditions.

INSIDE THE NEW AGE CARAVANS WAYFINDER

On the inside, the basics include a BMPRO BP35SI battery management system, 100Ah AGM battery and plenty of powerpoints. Across part of the back wall, the café dinette seating will seat up to five people comfortably and features a rectangular table. I was not too fond of the fact that the table hit the wall when moved around, though. 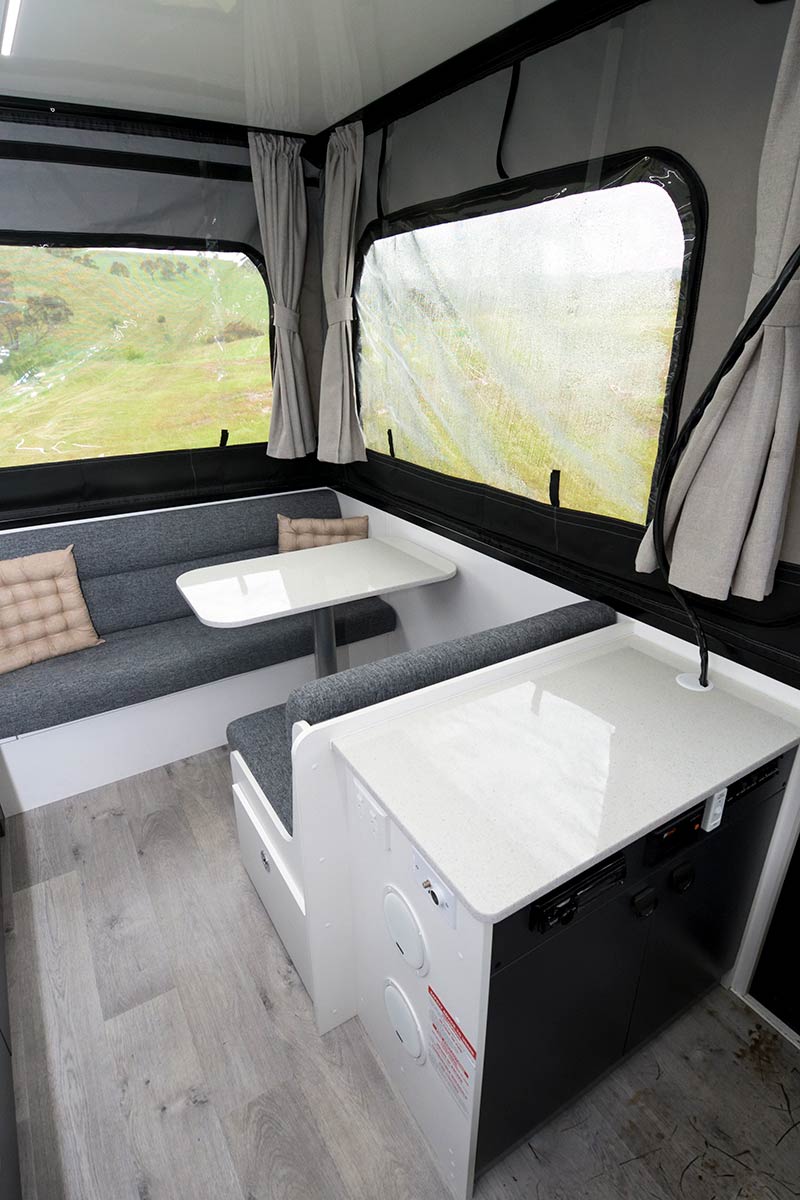 The Thetford three-burner gas cooktop with neighbouring sink are a good size for creating culinary masterpieces and the Thetford 93L three-way fridge is easy to access and an excellent size for two. There’s a good amount of storage and bench space in the kitchen, too.

The interior benchtops have all been neatly edge-banded, and the use of formica and laminex create a classy look and feel. All the electrical controls and radio are accessible, easy to use, and located in the walkway cupboard on the right as you step up into the van. 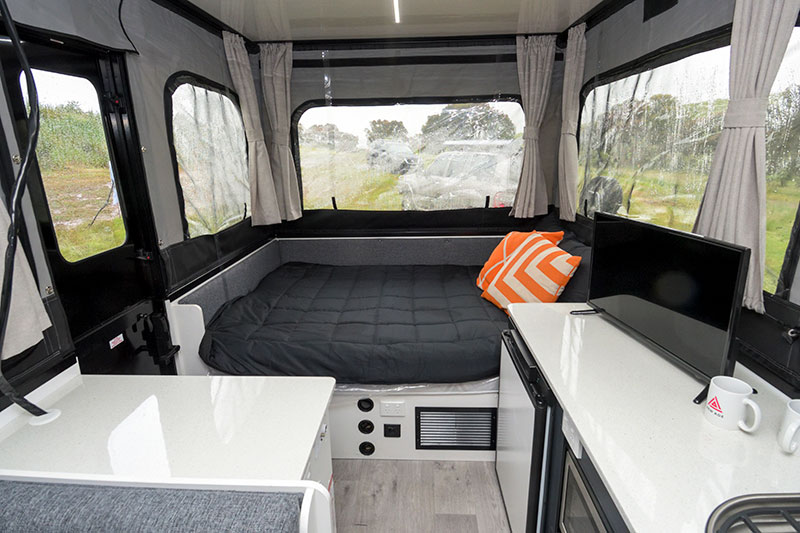 Across the front of the van is a comfortable, almost-queen-sized mattress. Underneath the mattress are three lift-up hatches that allow access to the underbed storage. What would be nice are some struts to hold the lids up and allow two-handed access to this space. We didn’t spot any reading lamps; however, New Age confirmed it supplies portable reading lamps as a part of the package. 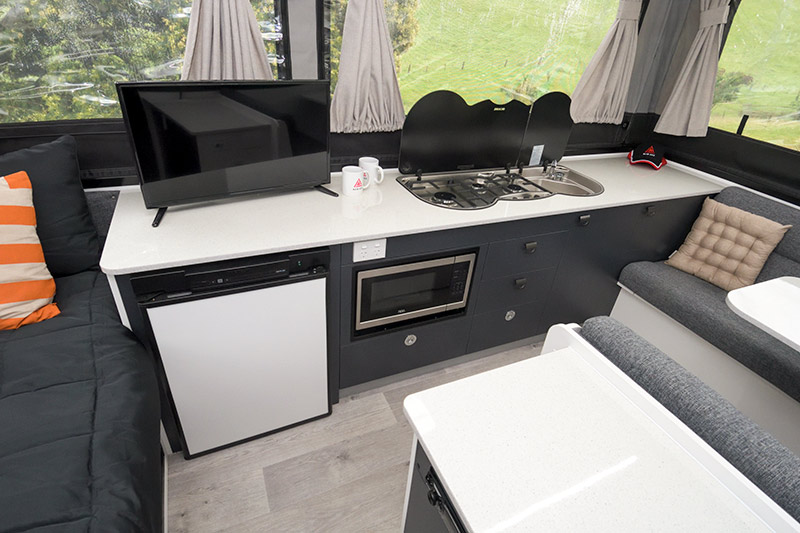 As mentioned, our review model was built with the Comfort Plus pack, including all the above features as well as a BMPRO Sway Control system, a 150W solar panel on the roof, a 24in smart TV/DVD and radio system, high-gloss cabinets, a second 80L water tank, and an NCE microwave, which also includes a very neat surround that covers the space between the microwave and the cabinet it sits in. There’s also an external picnic table and a couple of external speakers included as part of this package. 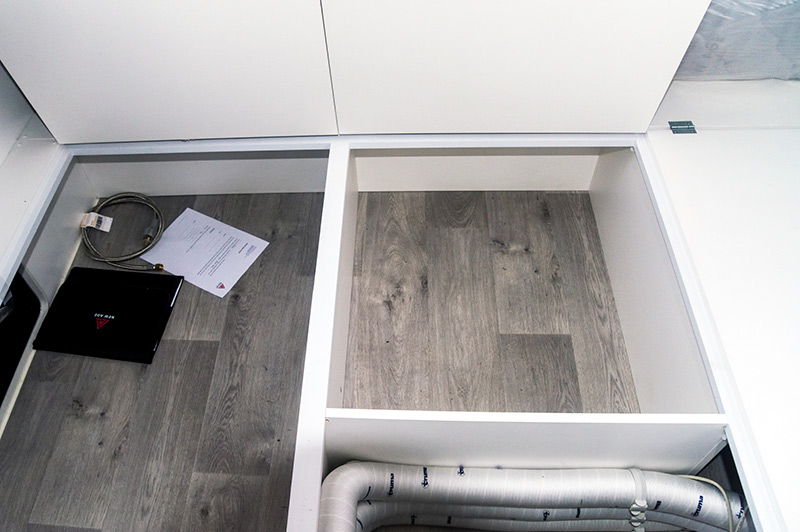 Our review camper was also fitted with options that included a Swift 28L hot water service, Truma reverse-cycle air-conditioner positioned under the bed, and an external shower.

There is an Adventurer pack for the more adventurous tourers, which is pretty much the same as the Comfort Plus pack, except it includes a DO35 hitch and Cruisemaster suspension for offroad touring. 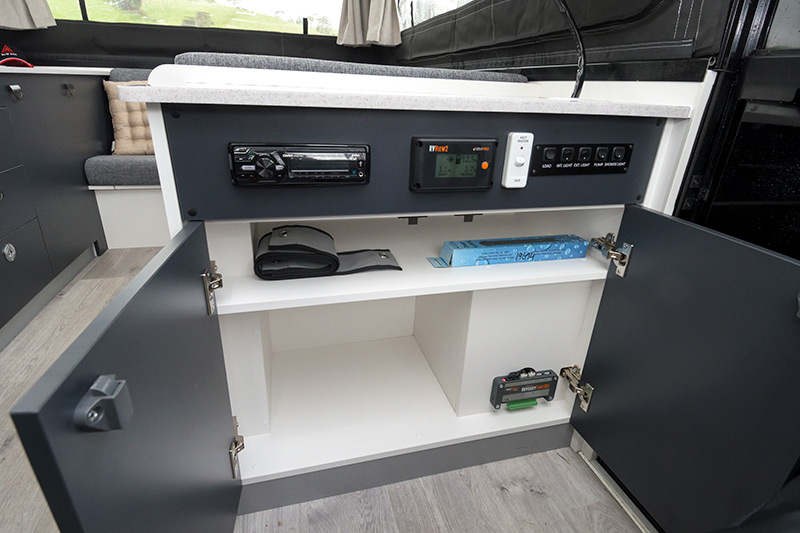 The Adventurer Plus pack adds all the same features as the Comfort Plus pack as mentioned; however, it adds a box awning.

Further options include the gas/electrical hot water system, external shower and Truma floor-mounted AC unit and outdoor shower, which are available across the range.

I liked the simplicity and practical layout of the New Age Caravans Wayfinder WF13. It was very light and airy, with huge windows and everything was easy to reach and use. The bench space is excellent as well. 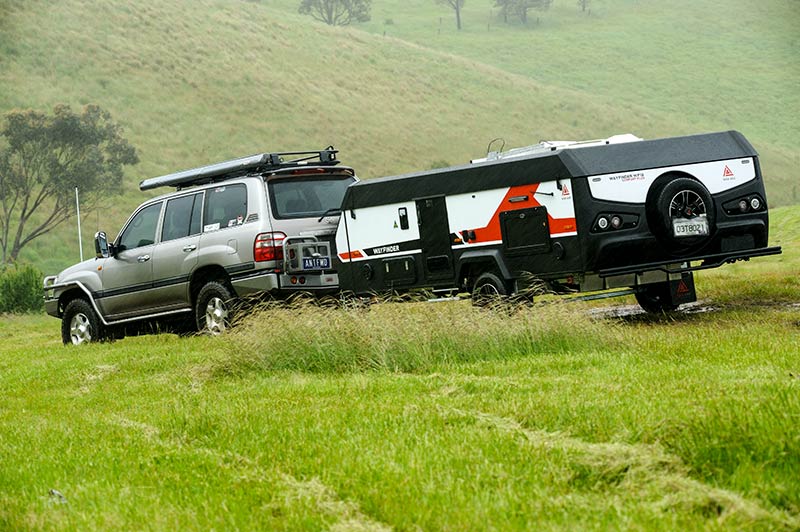 On the road, this van was easy to tow, and of course, the benefit of this style of camper is that it’s easy to store in an average-sized garage.

Overall, the MY21 New Age Caravans Wayfinder offers good value for money. It is well worth a serious look for buyers in this category.