The plan: hitch a ride with Virgin Australia to Brisbane, where Coromal caravans are built nowadays. For my 6am rendezvous at the Melbourne airport, my alarm woke me at 3am. This was going to be a long day. But as it turned out, it was worth every missed minute of sleep.

In 2018, Coromal Caravans was acquired by Apollo, the company behind one of the largest RV rental fleets in the southern hemisphere, not to mention Winnebago Australia and Adria, and has since invested in a program of technical modernisation for the brand.

The Glasshouse Mountains would be my testing ground, its gravel, corrugated logging trails the perfect place to put it through its paces.

The Ranger hauled the Coromal on the highway as though it wasn’t there, and the van behaved itself at all times. I experienced no sway or porpoising on the towbar. At lower speeds, on the tracks in the mountains, it was a similar story. 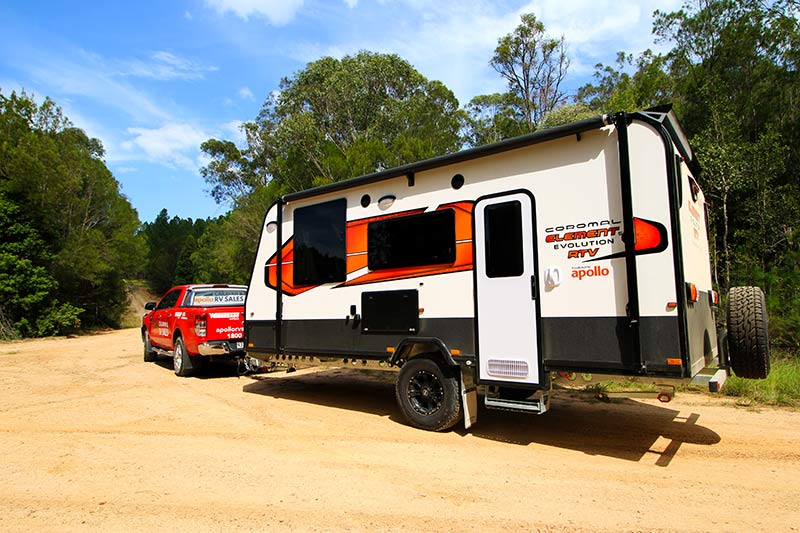 The Element 553 Evolution RTV is a semi-offroad van. As such, it doesn’t have excessive ground clearance; however, on some fairly steep corrugations, where I half-expected to bottom-out, the van walked on through.

As standard, it’s fitted with Al-Ko’s 3.5-tonne offroad pin coupling and the Coromal-designed seven-leaf wishbone suspension that the company has been using since the 1970s.

The so-called FRV chassis, though, is anything but 70s-era fare. Made of 550-grade high-tensile steel, each section has been CNC-cut and folded, and then secured together using industrial-strength huck rivets. The entire structure contains no welds.

The FRV chassis, Coromal says, is about 130kg lighter than a comparable RHS caravan chassis. Further, the A-frame is fixed to the chassis with high-tensile bolts so, in consultation with an engineer, the A-frame could theoretically be lengthened or shortened. 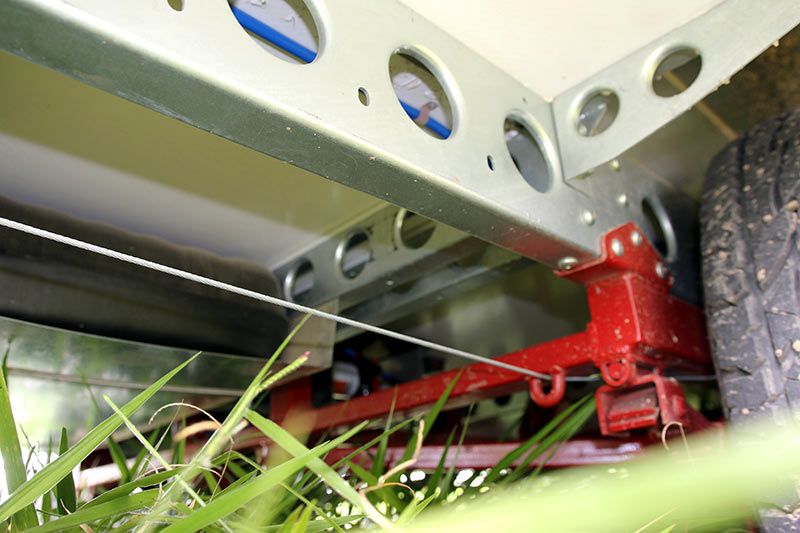 The lightening holes of the chassis’ cross members serve as attachment points for gas and water lines, etc., though I felt that some of the plastic components, i.e., the dump valves on the water tanks, could be better protected.

The cabling for the electric brakes runs directly into the brake drums – no dangling wires to be seen.

Atop the chassis, the van employs a system of sandwich panels comprised of 30mm one-piece walls, and a 50mm one-piece roof panel that runs from the very front to the very rear of the van. Each panel has a 2mm internal and external skin of fibreglass sandwiching a core of injected foam that should provide decent insulation.

High-tensile bolts secure the 40mm-thick ‘honeycomb’ floor to the chassis. These bolts have wide, flat heads that are mostly hidden by the furniture inside; however, one was visible on my van. It’s a small detail but, ideally, it would be great if they could be completely hidden.

The individual body components come together thanks to a special aluminium extrusion, which also serves as a mounting point for some of the internal cabinetry. 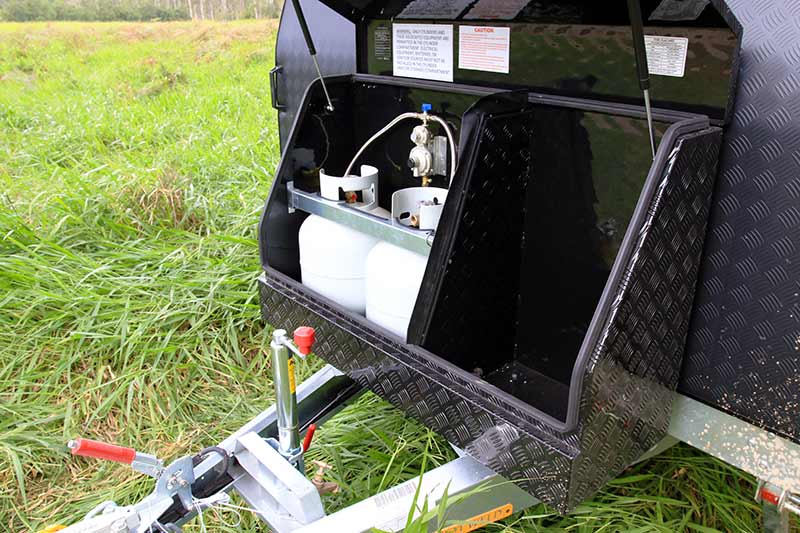 Externally, the van is fitted with the usual items, such as a drawbar-mounted storage box made of checkerplate. This box houses dual 9kg gas cylinders. Aft of that is a right-through tunnel boot.

The nearside is decked out with a roll-out awning, speakers and awning lights, as well as a USB charging point.

Instead of the Perspex windows common to caravans around Australia, Coromal uses hopper windows made of automotive glass. They’re heavier than their Perspex counterparts, but are much less susceptible to scratching. Unfortunately, the door can’t be fully opened at the same time as the dinette window – one will bind on the other.

Having said that, the outside of the van is certainly promising when it comes to long-haul adventures – it should serve you well in ‘semi-offroad’ conditions.

Inside, the Element 553 Evolution RTV has a layout suitable for two people. Overall, the fitout is of a high standard. For example, the holes through which the under-sink plumbing runs are neatly routed and there are no poor finishes to the cabinetry. 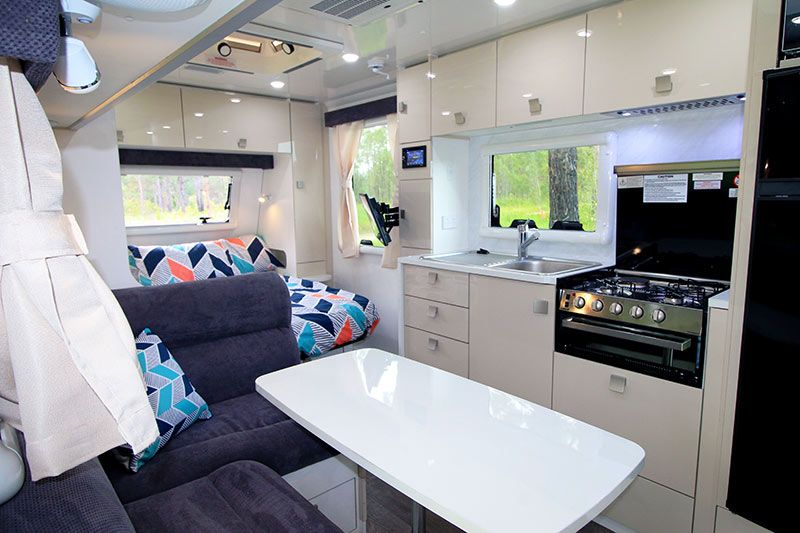 However, one aspect I felt could be improved was the shower. As it’s made from separate fibreglass panels, there’s a lot of silicone involved. A fully-moulded unit might be better.

That aside, the layout is very liveable. I loved the ‘his and hers’ drawers under the bed, which is also home to the onboard battery and associated charger.

A pressure hatch is fitted above the bed, while wardrobes are fitted either side. Each has a bedside niche with its own 240V and 12V points.

The television is sensibly placed on a swivel arm at the foot of the bed, on the offside, so it could be viewed from the bed or dinette.

Storage space at the dinette is limited to a drawer under the shorter seat. The cushion of the longer seat can be removed; however, due to the wheel arch, there’s very little usable space here. I liked that Coromal had fitted a 240V and 12V point in the dinette’s leg space. 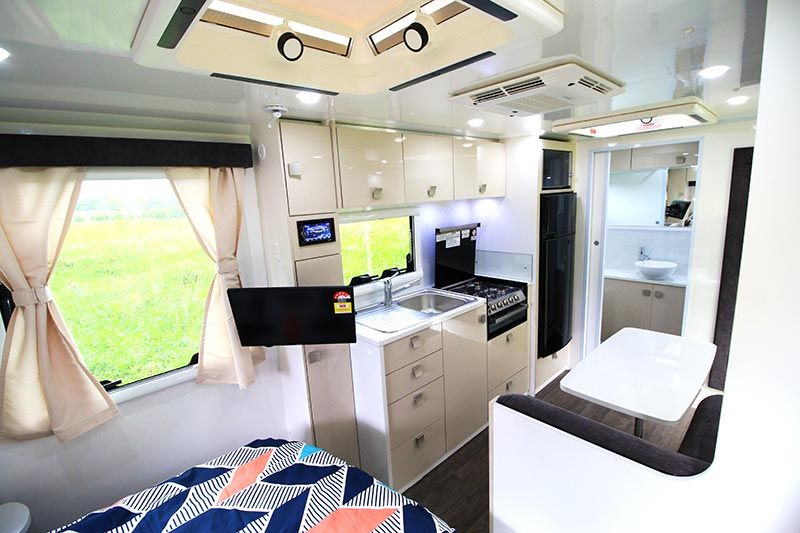 The kitchen has swags of storage space, along with a four-burner cooktop, griller, stainless steel sink, microwave, and a three-way fridge. At the forward end is a touch-screen multi-media unit.

The rear, full-width bathroom presents well. No, a washing machine isn’t included in this model, though if the hot water service that’s fitted to the rear offside corner, behind the cassette toilet, was relocated to, say, under the bed, then there could be room for one.

A side note: the composite bathroom wall is a structural component that adds to the van’s rigidity. 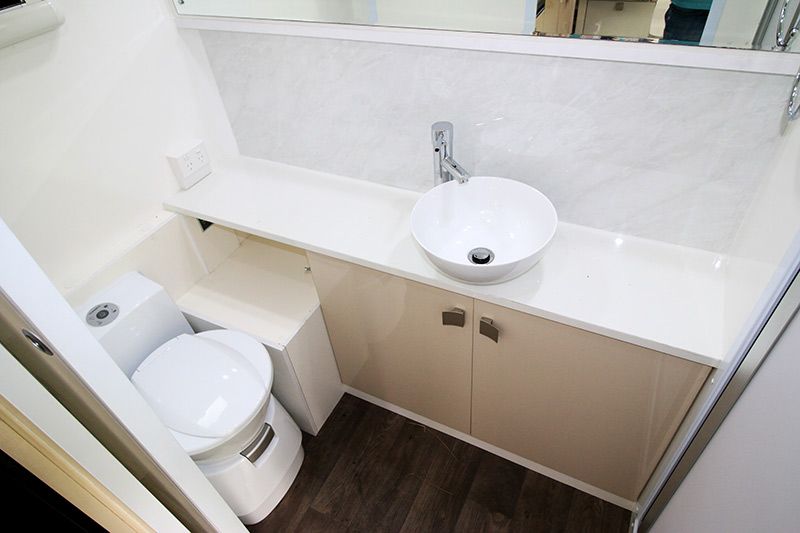 Naturally, there are plenty of other features and comforts not listed here, though I will point out the roof-mounted Dometic air-conditioner, specifically how it’s mounted. Back at the factory, I saw a finished roof before it was fitted to a van. Within the foam core was an extruded aluminium frame to support the weight of the air-con – I couldn’t help but be a little impressed.

I’ve said it before but I’ll say it again: the Coromals of today can’t be compared to those of two or three years ago. Night and day. Apples and oranges. It shows that a van can be much more than a stick and tin construction. It is lighter and just as tough – if not tougher – than many of its counterparts 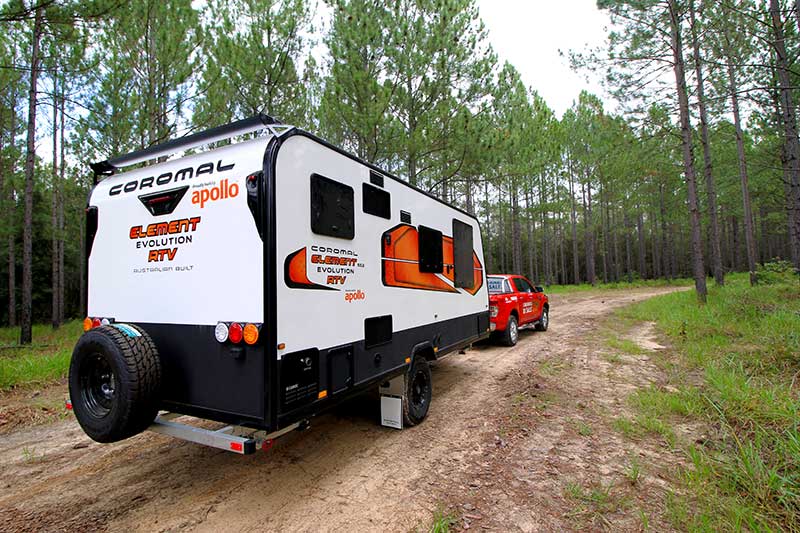 The payload capacity is 384kg. Is that enough? Much depends on how you travel, but it is 84kg greater than the historical standard for single-axle vans.

With its ‘automotive-style’ chassis and composite construction, and overall decent fitout, the Coromal Element 553 Evolution RTV has a lot of potential and a lot to offer.