Caravanning and camping are not what they used to be. In the old days, it was all about getting away from the complications of normal life. It was a pretty basic affair. Nowadays, we have to take our technology and modern conveniences with us in order to ensure we stay connected and have a good time. Smart devices, fridges, cameras, drones, even washing machines and microwaves, are all standard fare on our packing lists.

The problem with taking all this gear with us is the need to power them. In the past, that meant taking a generator or fitting an inverter, along with the necessary high capacity battery system to support it. Surely there is a simpler solution.

In simple terms, these portable lithium power stations comprise a high capacity lithium battery, a 240-volt inverter, AC and DC charging as well as a solar controller. Basically, everything you need to power all your devices away from mains power all in an easy to transport package.

HOW POWERFUL ARE THEY?

Portable power stations come in a range of sizes and corresponding capacities from around 100W AC to over 2000W AC. In this regard, they are very similar in output to most portable 240V generators.

Basically, anything you can plug into a mains power outlet at home or a USB port you can run or recharge from a portable lithium power station. They will almost always have a pure sine wave inverter built in, as well as a range of other outputs, such as automotive 12V sockets, USB ports of all types and capacities, and some even have wireless charging stations for smartphones.

HOW LONG DO THEY LAST?

If you were to run a 700W appliance continuously on the Bluetti EB55, the internal battery would be flat in around 45 minutes.

That may not seem like a lot but consider that may not be a typical use for one of these power stations. A more realistic use may be to power a 40L car fridge. It will consume around 50W when the compressor is running but because it cycles on and off to maintain a set temperature, it may only consume around 25Wh per hour with a duty cycle of 50 per cent. At that rate, the Bluetti EB55 will power the fridge for around 21 hours before requiring recharging.

If you’re only using it to recharge low-power USB devices, the battery could last for several days.

If you find the battery capacity is not sufficient for your needs, some units can be expanded by the addition of a separate battery pack.

HOW DO THEY RECHARGE?

These power stations will come with several recharging options. Using the Bluetti EB55 as an example, it comes with a 240V charger, a cigarette lighter lead and it has an inbuilt MPPT solar controller that is capable of using up to a 200W solar panel. In other words, you should have no problems finding a way to recharge one of these units.

CAN THEY DO EVERYTHING A GENERATOR DOES?

These portable lithium power stations can do everything a generator can do within their output and power capacity limits. What’s more, they do it without emitting any noise or fumes and without the need to carry fuel.

As a back-up power source for a caravan or camper trailer, they are an excellent alternative to a petrol generator. If you normally rely on solar recharging and you have a few days of cloudy weather, you could use one of these to power many devices and reduce the demand on your house batteries.

There are cheap power stations and expensive ones. In this regard, you don’t want to skimp on quality. Considering the complexity of what’s inside these units, you want them to be the best you can afford.

That said, to determine the value of these power stations, you need to compare their cost against systems with similar capabilities.

The Bluetti EB55, with its 700W inverter and 537Wh battery, retails for $899. If you were to purchase a 50Ah Lithium battery (roughly equivalent to the battery in the EB55), a 700W inverter, an MPPT solar controller and a 240V charger, the cost would be around $950 and that doesn’t include the cost of installing all that equipment into a portable box, your vehicle or caravan. On that basis, the Bluetti EB55 is excellent value for money.

Compared to a 700W petrol generator that costs around $400, the value may seem a little harder to justify, but remember the generator requires petrol and may make you quite unpopular with your fellow campers. Then there’s the question of storage. No one wants to store a smelly generator in the boot of their car.

WHO SHOULD BUY ONE?

If you’ve got a company-supplied vehicle that you can’t make modifications to but still want to go away camping and take your technology with you, a portable power station makes sense. Similarly, if you have an older caravan or camper that doesn’t have a decent electrical system, these will also prove invaluable.

If you have a modern caravan with a sophisticated 12V electrical system, their appeal may be somewhat reduced. If you get a larger unit of around 2000W capacity, it could be used as an alternative to a generator as a means to recharge your house batteries, remembering it will need to be recharged in a similar way to the caravan’s battery at some point.

It is worth considering these portable power stations can be used in a multitude of other environments. Since they retain their charge for long periods of time, they make excellent back-up household power supplies in the event of a long black-out.

If you can find multiple uses for a portable power station, their appeal and value increase substantially.

While it is not always clear from the specifications, the reason for this is due to the different types of batteries used in these units. Lithium-ion batteries are generally cheaper but have fewer recharge cycles, whereas lithium iron phosphate (LiFePO) batteries are more expensive but can be recharged many more times.

Another possible issue is with the quoted output of the 240V inverter. Some brands quote a nominal output figure that can be sustained for a long period of time, while others will quote a peak (or ‘boost’) output that can only be sustained for short periods.

Other differences may be in the quality of the internal components and wiring, MPPT solar chargers as opposed to PWM chargers and the strength of construction.

WHERE DO YOU BUY THEM?

There are several brands of portable lithium power stations marketed in Australia. Most can be purchased directly from the importer or through caravan and camping accessory stores, specialist electrical retailers and generator suppliers.

For more information, see the table on page below showing various models and the run time you could expect from various loads. We have also noted their weight as this can be an issue with the larger capacity units. 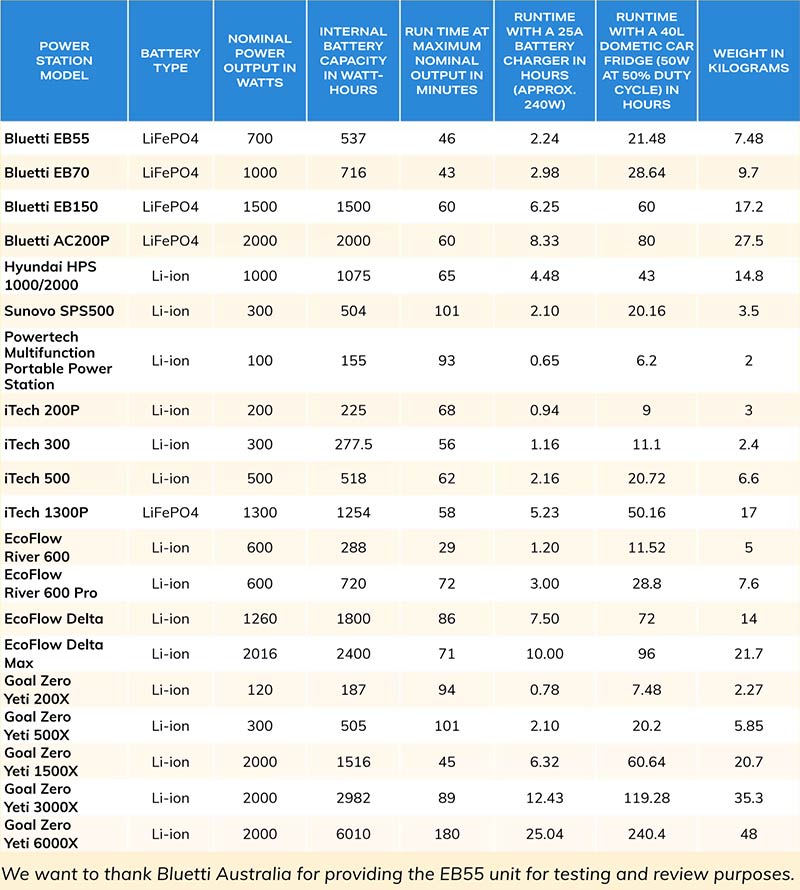