I’ve long been a believer in the notion that small is cool when it comes to caravanning. Don’t get me wrong: a big, beautiful caravan has it’s appeal, especially when the kids are onboard, too.

But give me a compact, lightweight single-axle rig with a practical layout and some home comforts, and I’ll be a very happy camper. 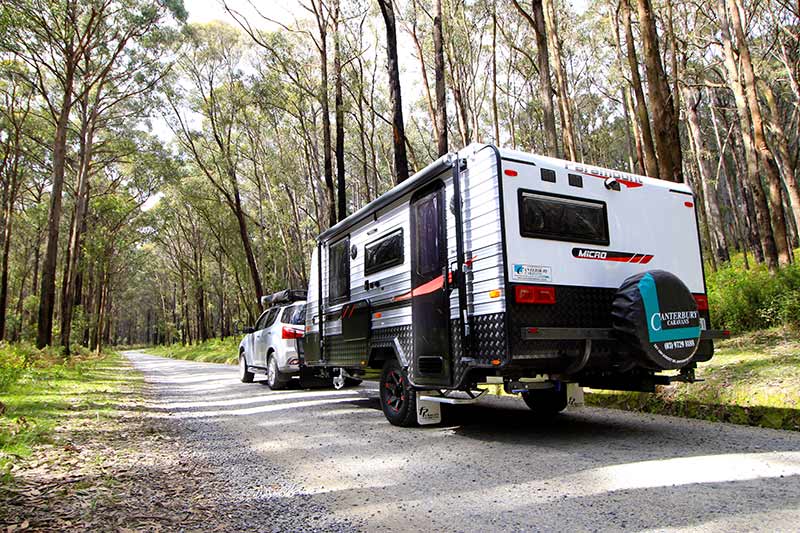 The Paramount Caravans Micro pop-top fits this criteria nicely. The Micro is not a new caravan as such, but the 15-footer (internal length) that I hitched up for a run into the bush was fresh out of the factory, sporting a few new ideas and looking as good as ever. I couldn’t resist.

First, the Paramount Caravans Micro really is a breeze to tow. It hitched to my vehicle via the optional DO35 coupling and the optional 2500kg-rated Cruisemaster CRS suspension system did a good job, as expected, as I hauled it along the blacktop and into one of my favourite national parks.

The 15ft Micro rides on a 4in SupaGal chassis with 4in A-frame as standard; however, the dealer, Canterbury Caravans, had upgraded the A-frame to a 6in number. The pop-top’s meranti timber frame is clad with ribbed aluminium and a lower waist of protective black checkerplate. Smooth composite aluminium is used at the front and back. It adds up to a smart-looking pop-top.

Who would this rig appeal to? The way I see it, grey nomads who want to downsize to something a little more manageable on the road and easier to store at home might be intrigued by the 15fit Paramount Paramount Caravans Micro. Otherwise, couples touring without kids who simply want a decent, comfortable, easy-towing van would find plenty to like about this rig. 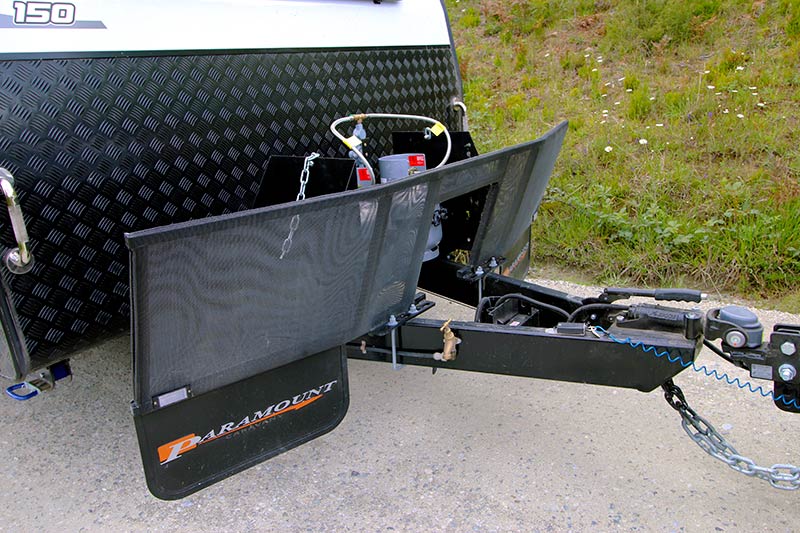 The A-frame is fitted with dual 9kg gas cylinders behind a mesh stoneguard, and there’s a nearby gas bayonet, too, should you wish to bring along a portable barbecue – perhaps stored in the front tunnel boot. This tunnel, by the way, does not have an offside access point.

Canterbury Caravans wanted this review Micro to be as easy as possible to store, whether in a garage or carport. To that end, they stripped the usual items off the roof: the solar panels, air-conditioner and even the aerial have either gone inside the van or replaced with portable units. 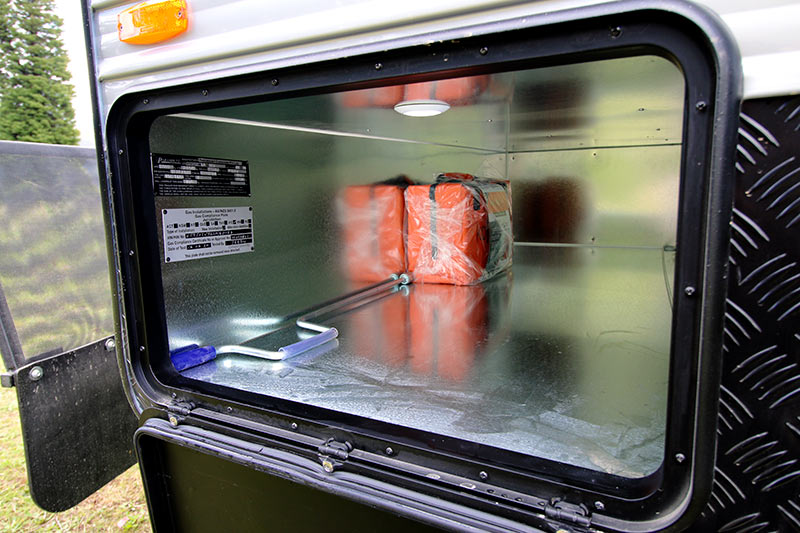 That’s right: Canterbury Caravans instead provided a 200W portable solar panel to charge the 100Ah standard battery (Canterbury had also fitted a second 100Ah battery to this van). For this, the dealer included a second Anderson plug, mounted to the offside chassis rail.

Meanwhile, the conventional roof-mounted aerial has been replaced by an Explorer side-mount antenna, and the air-conditioned is found under the bed rather than on the roof. The added benefit: the pop-top roof is easier to lift without all that weight up there. Having said that, this equipment can be mounted to the roof if preferred.

The Micro has dual 95L water tanks as standard, which should be plenty for a few days worth of off-grid camping. 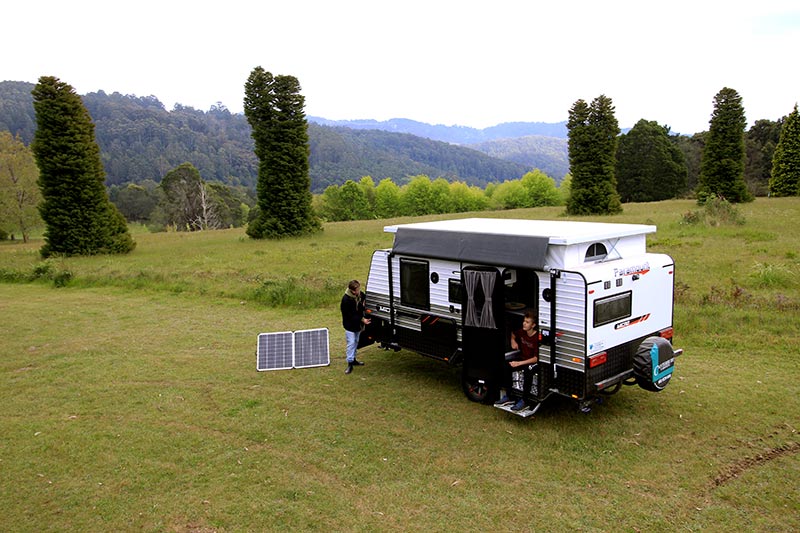 Despite the fact our Micro was not an offroad van, I particularly appreciated the protection – lengths of black conduit – that Canterbury Caravans added to the underbody grey water pipes. Great!

Of course, the Paramount Caravans Micro doesn’t miss out on the standard equipment you’d expect, from external speakers to a picnic table, external 12V point, and a roll-out awning. But Canterbury added yet more equipment to this van: a reversing camera, a pull-out step, and even a couple of jerry can holders on the drawbar.

While the Micro isn’t designed as high-end rig, it is undoubtedly well-specced on the outside, especially with the extras fitted by Canterbury Caravans.

Stepping inside, the appeal of this pop-top was obvious. Aside from the fit and finish, which is overall quite good – I thought the layout worked very well. The compromises required to fit everything, including the bathroom, seemed reasonable. 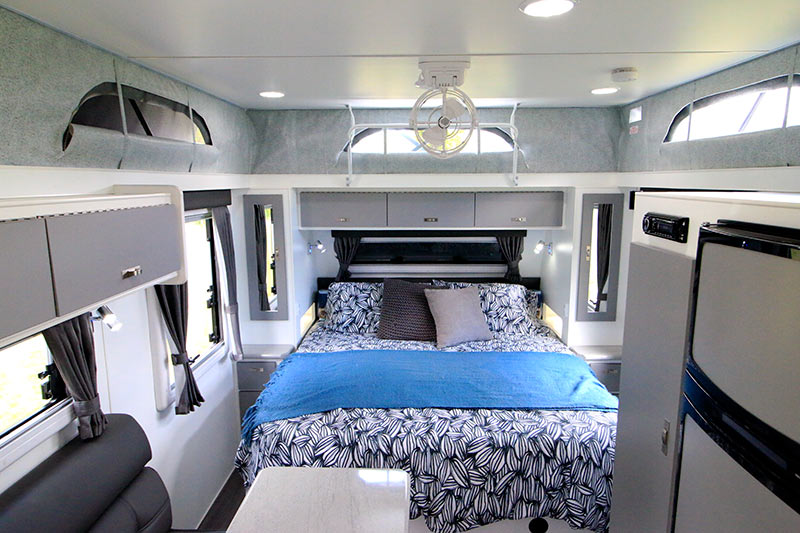 Sure, the dinette is a two-seater bench-style unit on the nearside, but the table can swivel around to provide some flexibility, and there is a 12V and 240V in the leg space.

The kitchen, fitted across the rear wall, has a few cupboards and drawers on metal runners – all locker doors are on piano hinges – along with a stainless steel sink and a four-burner cooktop and griller. There’s even a microwave built into the overhead furniture space.

The downside is zero bench space. That’s where the swivelling nearby dinette table comes in, so the lack of dedicated kitchen bench space is not a complete disappointment. 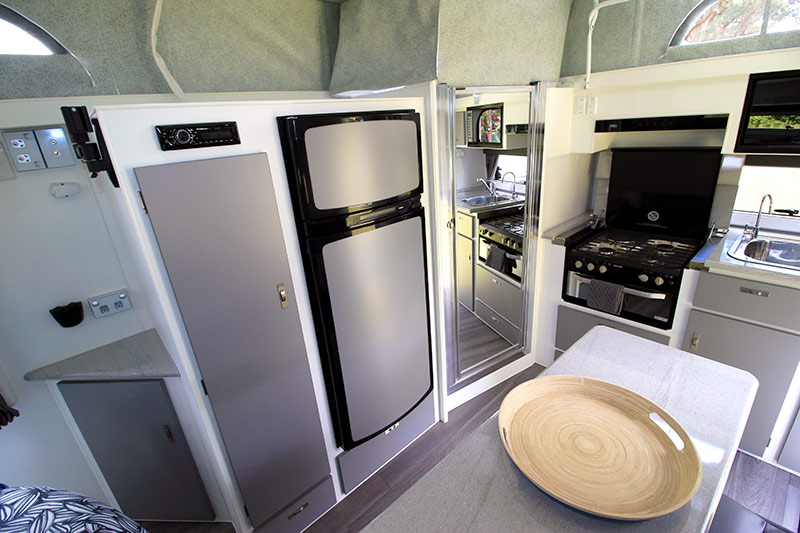 The bathroom, with its mirrored door, came as a pleasant surprise. It’s located in the rear offside corner, between the upgraded 175L fridge (a 93L fridge is standard) and the kitchen, and comes with a hand-held shower rose and a small moulded-fibreglass washbasin behind the bench-style cassette toilet.

A big plus to this layout: the large offside pantry, which is built into the furniture next to the fridge. Most vans of this size might offer a two-shelf under-bench pantry, but this one is positively huge in comparison.

The forward bedroom is fitted out with an optional Sirocco fan, a bedhead of overhead lockers and side wardrobes (with niche), offside TV swivel bracket and more. 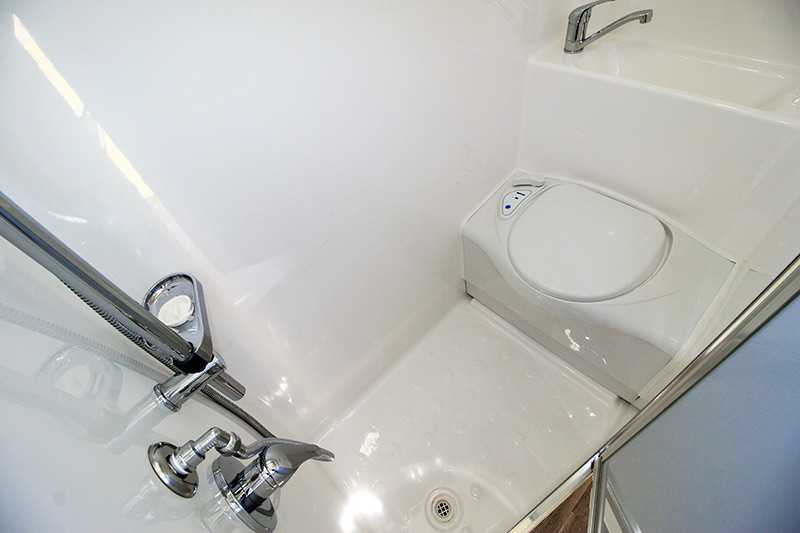 Now, the under-bed storage space is partially occupied by the air-conditioner; however, there is room left over for the portable solar panel and antenna.

Comfortable, sensible and practical – not to mention attractive and nicely finished off. That’s the interior of the 15ft Paramount Caravans Micro.

When my kids have all grown up, this is the kind of van I’d be looking to purchase. It’s light, easy to tow and relatively cheap in terms of fuel. It’s also bound to be less stressful when trying to manoeuvre around the caravan park than its bigger brothers.

Then there’s the storage factor. With those items removed from the roof and replaced with reasonable alternatives, it’s bound to be easier to find a home for it when it’s not in use. 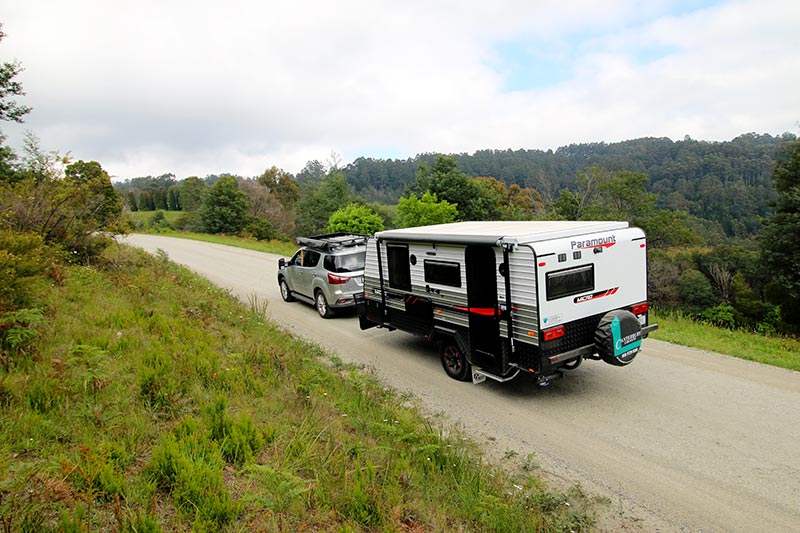 Finally, while this pop-top was fitted with many dealer-added options, it’s worth noting that these features were fitted by the factory and accounted for in the Tare weight printed on the compliance plate.

Yes, the Paramount Caravans Micro has a great deal of appeal. Check it out.

Chassis: 4in SupaGal with optional 6in drawbar