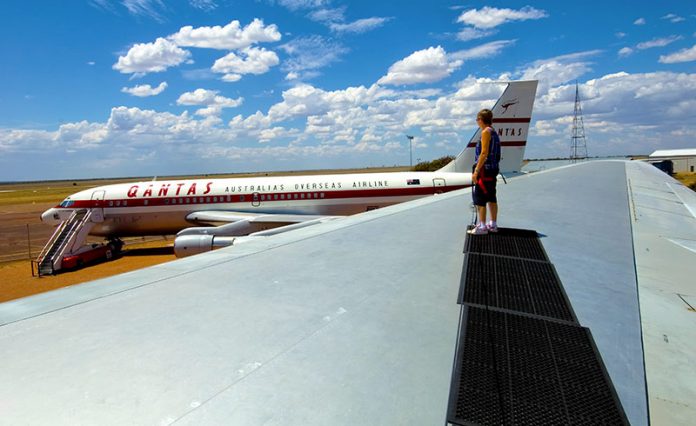 Mt Isa is poised at the eastern end of the Barkly Highway, and it is here that the RVer must decide which way to head, because 136km to the east, the road forks with the Flinders Highway, delivering travellers to Townsville, while the Landsborough/Capricorn Highway terminates in Rockhampton.

If you are not set on either of these Queensland destinations, your choice might boil down to which road has the most interesting places to explore along the way. Let’s have a look at both.

Cloncurry is 14km from that junction, and like many outback towns, it is easy to dismiss. But a close look at the Outback Queensland website will introduce you to a number of Cloncurry’s highlights. Perhaps the most important service in the outback is the Royal Flying Doctor Service, and this was first established in Cloncurry by John Flynn. The John Flynn Place Museum & Art Gallery commemorates this, along with the outback radio communication service Flynn also pioneered. This is a must for both history and flying enthusiasts.

If someone in your travel clan is a budding paleontologist, the junction presents you with a conflict (albeit one that is easily resolved). Hopefully, you have already been introduced to some of Australia’s megafauna at the Riversleigh Fossil Mammal Site in Boodjamulla National Park, and you have visited the Riversleigh Fossil Discovery Centre in Mount Isa, where you learned about the ongoing research.

For dinosaur lovers, a dino-triangle between Richmond, Winton and Hughenden is the only solution to the conflict. In fact, this is Australia’s Dinosaur Trail. You can proceed to Richmond via Julia Creek, which also warrants a stop. Animal lovers won’t want to miss the twice daily feedings of two Julia Creek dunnarts, Donald and Duncan. The Duncan McIntyre Museum is also worthy of a wander.

It is Richmond, though, that is pinned to the north-west end of the Dinosaur Trail and it presents the brilliant Kronosaurus Korner Museum. A full-size replica of Kronosaurus queenslandicus stands near the entrance to the information centre, and inside the museum is a fascinating collection of extinct, 100 to 115-million-year-old marine fossils, remnants from a vast inland sea.

A Richmond pliosaur lies sprawled in the centre of one of the rooms, and extending into several other rooms are enough fossils and information to make you an expert. Most enthralling of all is the chance to go on your own fossil hunt or to volunteer in the lab.

From Richmond, you can take the Richmond-Winton Road, and while this is being progressively sealed, the southern section is not yet sealed and can be rough. Check road conditions before proceeding. The other option is to return to Julia Creek and head south on Julia Creek-Kynuna Road to the Landsborough Highway and then to Winton, ‘Australia’s Dinosaur Capital’.

Winton’s Waltzing Matilda Centre, reborn in 2018 from the ashes of a catastrophic fire in 2015, provides abundant information on the region, including dinosaurs. Winton has two dino must-dos: the Australian Age of Dinosaurs museum and the Dinosaur Stampede National Monument.

The first is a working museum housing a fascinating collection that includes Australia’s most complete pterosaur, and they are currently working on moving a sauropod trackway spanning 50m that includes “huge sauropods, small to medium–sized ornithopods and tiny theropods”.

At nearby Lark Quarry, the national monument is the actual site of a stampede that happened about 95 million years ago when a therapod came upon a gathering of around 150 smaller dinosaurs drinking at a lake, leading to a chaotic scramble to escape the predator.

We will return to Winton shortly; meanwhile, the dinosaur triangle returns to the Flinders Highway via the sealed Kennedy Developmental Road. At Hughenden, the Flinders Discovery Centre is mandatory, housing a life-size replica skeleton named Hughie, a muttaburrasaurus. The collection is smaller than in the other museums, but equally fascinating. It is interesting to note that all of the fossils mentioned above were discovered by local graziers working on their properties.

Another highlight of Hughenden is Porcupine Gorge National Park, about 70km to the north. The Pyramid camping area has sites for vans, tents and camper trailers. Bird watchers will delight in the numerous species attracted by the gorge waters.

Continuing on the Flinders Highway, tiny Prairie and then Torrens Creek are next. Ninety kilometres south of Torrens Creek is Moorrinya National Park with camping for tents and camper trailers. Moorrinya provides habitat for a range of mammals, including koalas and sugar gliders.

Burra Lookout over White Mountains National Park provides a perfect spot for a stop: the landscape is lovely through here. An unsealed track leads to the Canns Camp Creek camping area for tents and camper trailers. This park is home to a number of reptile species, including the frilled lizard.

The early gold rush town of Charters Towers has everything a visitor could ask for. In fact, a visit could easily turn into a permanent move. The downtown area, with its historic buildings, is charming and gracious. There is an abundance of natural areas, parks and gardens. Self-drives tours and guided tours are on offer, along with walking tours. In short, Charters Towers can hold the attention of many an RVer for at least four or five nights. The Flinders Highway ends 138km along in Townsville.

Back at that junction, you might prefer the Landsborough Highway. We have already introduced Winton’s dinosaurs, but the town has more to do and see than just very old bones. In fact, the local history is tied to two volatile shearers’ strikes that led to the foundation of the Australian Labor Party, along with the benefits and rights we largely take for granted today.

One of several scenic drives is the Route of the River Gums that combines the scenery of nearby Bladensburg National Park with a memorial cairn to those shearers (the park has a tent and camper trailer campground). A self-guided walk through town will reveal the story behind Banjo Patterson’s song Waltzing Matilda and how the events of a second shearers’ strike inspired the lyrics.

The Landsborough Highway continues to Longreach, a town tied to Australia’s settlement history. There are a number of things to do here, but there are two that every RVer should take advantage of at some point. 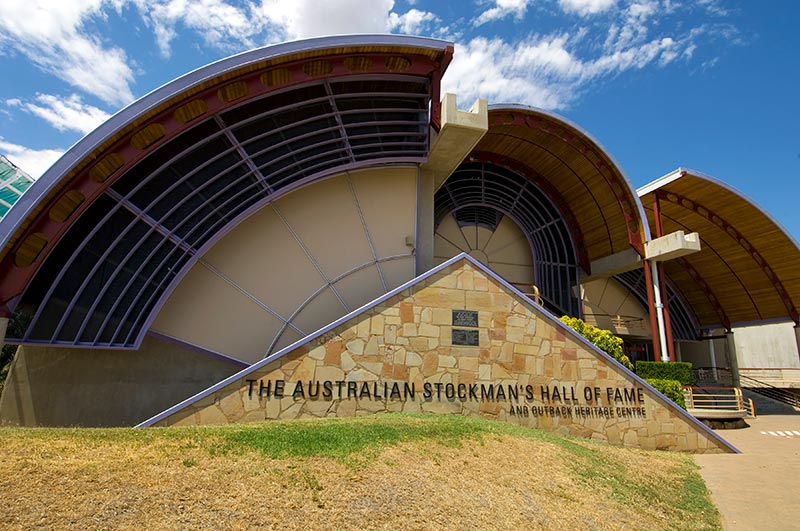 The Australian Stockman’s Hall of Fame celebrates the heritage of our early pioneers with fascinating exhibits, each warranting enough time to fully absorb the information provided.

The Stockman’s Show is a must, as is the 20-minute film about the ‘birth of a nation’. This venue is undergoing extensive renovations and will re-open in April of 2021. A full day here is a day you won’t soon forget.

For the aviators in your group, the Qantas Founders Museum, is the second ‘must’. The museum houses QANTAS planes ranging from an Auro 504K up to a Boeing 747 with six others in between, including a Catalina Flying Boat. The story of how a particular 747 (238B VH-EBQ) was flown to Longreach and landed on an airstrip too small for the plane is remarkable.

There are a number of special tours on offer, including a ‘wing walk’ on the 747, and in the evening, the Luminescent Longreach light show detailing the 100-year history of QANTAS.

Continuing east from Longreach,  Illfracombe is only 28km along and is worthy of a stop. Along the centre of town is a collection of historic farming and transportation equipment that sets this little town apart from many others. Spend an hour or so wandering around the display, and if you have left Longreach late in the day, this is a nice place to pull a one or two night-stand.

In Barcaldine, the Landsborough becomes the Capricorn Highway. Here, we return to the theme of hard-won workers’ rights. The Australian Workers Heritage Centre pays tribute to Australia’s working class, and the story of the 1891 Shearers’ Strike is told here in detail.

Women are paid particular tribute, since so often in the past, they have not been given credit where credit was due. In Barcaldine, striking shearers and other workers gathered by the thousands under the shade of a ghost gum tree and laid the foundation for the Australian Labor Party. The heritage-listed tree, known as The Tree of Knowledge, still stands, albeit only after a number of radical surgeries to keep it alive; it can now be seen near the railway station. Lights make it especially pretty at night.

The town of Jericho follows, and then Alpha with its 28 murals. Gem fossickers won’t want to pass up a visit to Anakie, Sapphire and Rubyvale; the Sapphire Trail Brochure provides the perfect introduction along with information from Central Highlands Queensland. More than a few RVers have caught gem fever and turned a hobby into an income that supports their nomadic lifestyle rather well.

Emerald, named for its encircling green pastures (not for emeralds) is an attractive town with a number of things to do both locally and in the surrounds. The Visitor Information Centre is in Morton Park near the Big Easel (Van Gogh’s Sunflowers). Be sure to pick up the Visitor Guide and the Touring Map. The sensational Carnarvon Gorge section of Carnarvon National Park is tantalizingly close by; for more information check the GoRV travel guide.

Blackwater is next on the Capricorn Highway, a town that is all about coal. There is a coal-mining museum, coal mine tours and even a memorial to miners killed in accidents.

Blackdown Tablelands National Park is a short drive to the south-east and offers a tent and camper trailer campground. If you are on the move with no time to stop, then at least take a rest at the Japanese Gardens along the way; it is a nice place for lunch and a wander.

Bluff, Dingo and Duaringa follow, marking the eastern boundary of the Central Highlands district. Rockhampton completes the journey, and from there the options are numerous.