Offroad caravans come in all shapes and sizes, from 24-footers complete with every conceivable luxury, to tiny single-axle rigs that amount to little more than a storage trailer with a rooftop tent.

Those big rigs have their place – and who wouldn’t want all that living space and comfort? – but I’ve always preferred offroaders to be sub-18ft, riding on one axle and weighing less than 2000kg.

The smaller and lighter the van, the more practical it is to tackle tight tracks with less likelihood of damage. 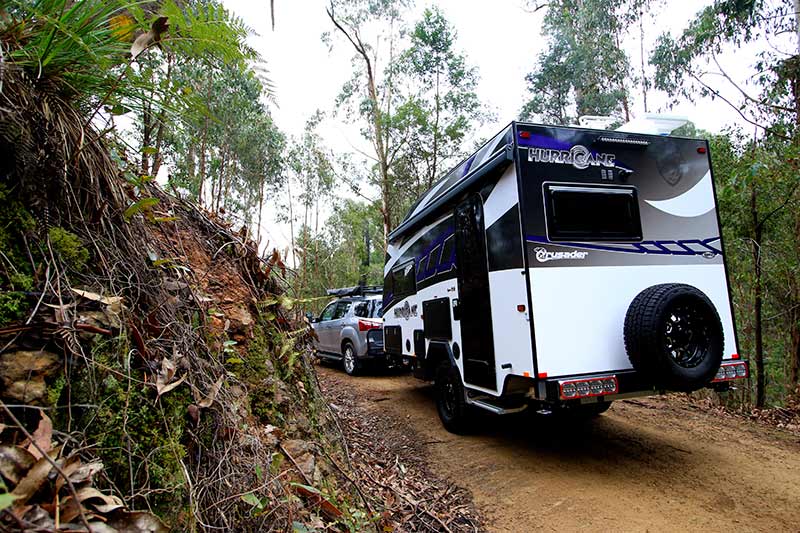 This is where a van such as the new Crusader CRV Hurricane comes in. We’ve looked at the other vans in this range in recent issues. These include the on-road Esperance and its offroad stablemate, the Gladiator.

The Hurricane shares many features and design points with these vans; however, its numerous differences put in a class of its own.

So on a day that threatened torrential rain, we hitched it up and set off to find out what this van was all about.

The first thing to know about the Crusader CRV Hurricane is that it comes with the Al-Ko iQ7 disk braking system, rather than the electric drum brakes found on most caravans. This unit stores compressed air within a pressure chamber to actuate the van’s brakes.

Compared to electric drum brakes, the iQ7 is a revelation. It brakes the van particularly smoothly, without the ‘grabbing’ of drum brakes. The system, however, requires the tow vehicle to be wired with a dedicated Anderson plug for power.

Another major feature of the Crusader CRV Hurricane is its independent airbag suspension. When I pulled up for the day, the van was not level. But using the remote control, I was able to level the van east-west at the push of a button. When it was time to set off, I just flicked a couple of switches and the airbag system automatically re-levelled – brilliant. 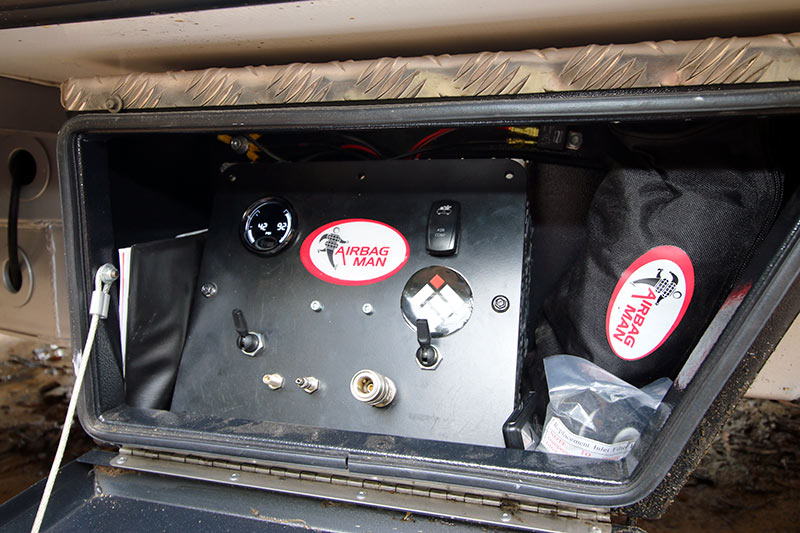 A SatKing satellite TV system is also included as part of the package, as is a 28in smart TV. Further setting it apart from its stablemates, the Hurricane gets a gas-fired ducted heater and the Dometic Dust Reduction System to eliminate dust ingress.

While the Crusader CRV Hurricane retains the same essential shape and build of the Gladiator, with fibreglass sandwich panel walls and roof, along with a 30mm floor section, its body is about 450mm longer. 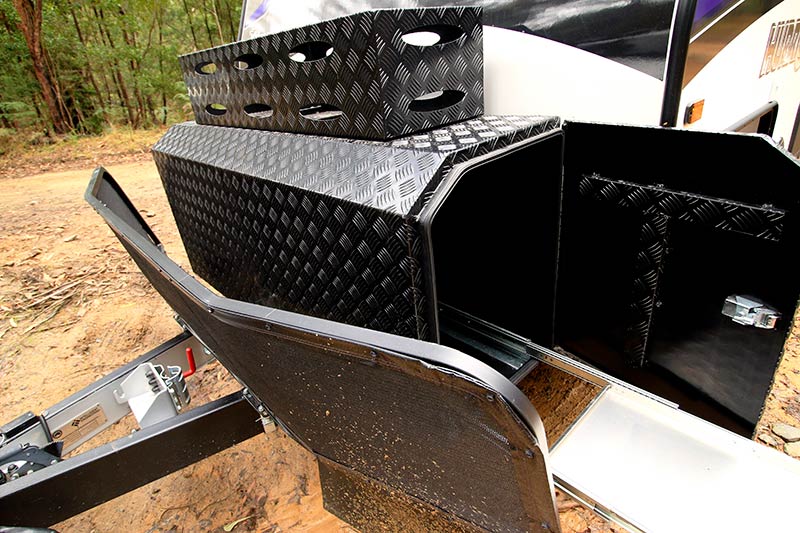 It’s 12V system is comprised of two 200Ah lithium batteries (an upgrade over the single 120Ah lithium found on the Gladiator), two 190W solar panels, a 3000W inverter, and a Projecta electrical management system. It seems like a generous setup and I don’t see any reason it wouldn’t be up to extended stays offgrid.

A separate Anderson plug is provided, allowing you to charge the onboard batteries between destinations.

The water system is the same as the Gladiator’s: two 95L freshwater tanks and a single 95L grey water tank. 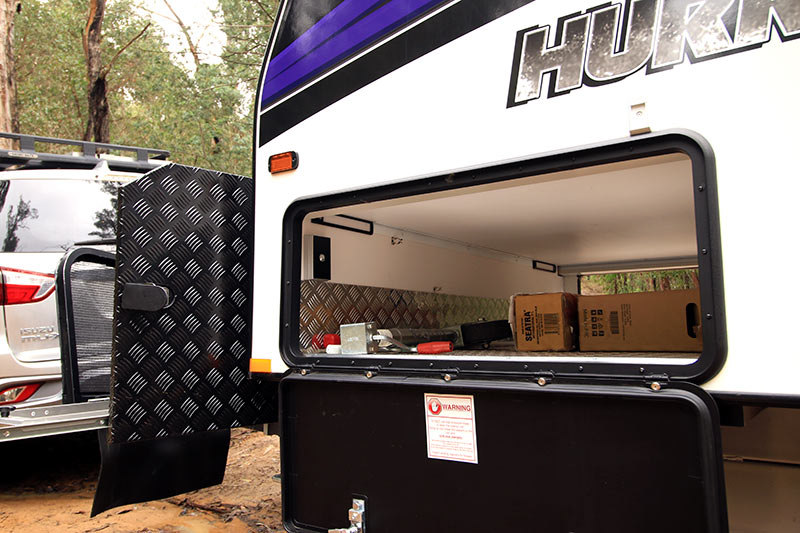 A range of other external features are provided, too. These include a roll-out awning, an electric fold-down step – the Hurricane rides quite high – an entertainment locker, which allows you to bring the TV outside and plug it in, a reversing camera, and even a rear LED light bar. A spotlight is provided at the front of the van, too.

Overall, the Crusader CRV Hurricane is generously equipped for outdoor living. There’s even a couple of speakers to go with the Bluthtooth-enabled stereo system, a fold-down picnic table, and a large tunnel boot.

INSIDE THE CRUSADER CRV HURRICANE

The layout is much the same as that of the Gladiator and Esperance, with one crucial difference: the additional length has allowed Crusader to fit some side tables/cabinets at the end of each single bed. 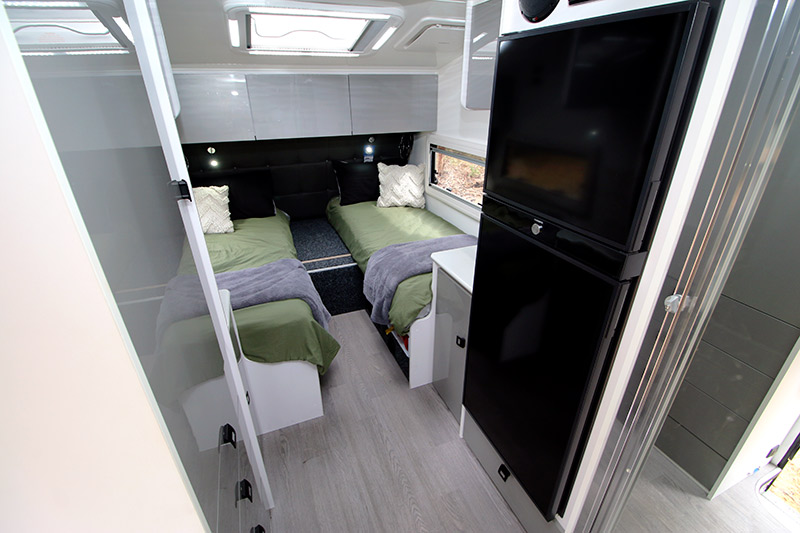 Personally, I would prefer for the extra length to instead go towards providing longer beds, but I’m about 6ft 2in. Shorter people might prefer the storage space provided by the cabinets.

As with the other vans in the CRV range, you can fit a board between the two single bed bases and pull the mattresses together to create a double. 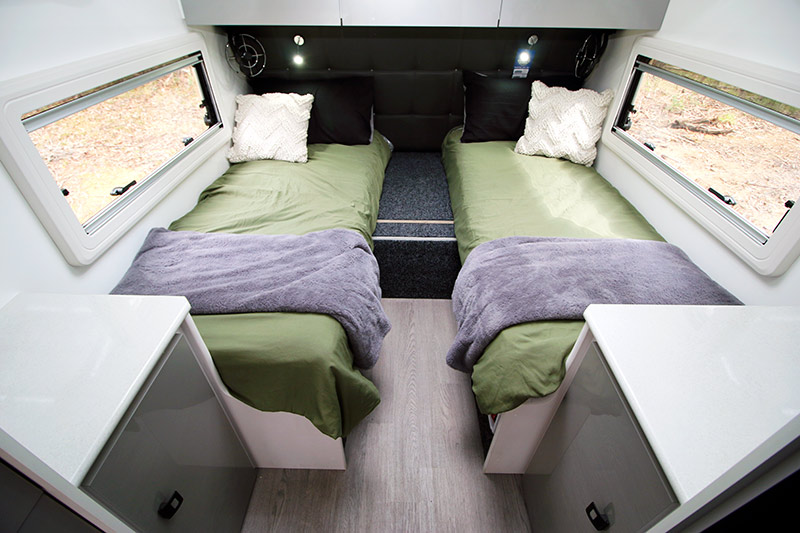 Unlike with the Esperance and Gladiator, a swivel table is not standard in the Hurricane since each single bed already has its own table at the end. However, like those two vans, a special timber insert can be fitted between the bed bases and the mattresses pulled and zipped together to create one double bed.

A total of four 12V Sirocco fans are provided in this van: one either end of each bed! Of course, a range of 12V lights and powerpoints are provided, too. Did I mention that the internal and external lights can be operated remotely?

The storage available is quite generous, too, especially in light of the fact that this is a compact caravan that contains a combo bathroom. The large offside wardrobe and a number of overhead lockers, pot drawers in the kitchen and more, add up to enough space for a touring couple, I believe. 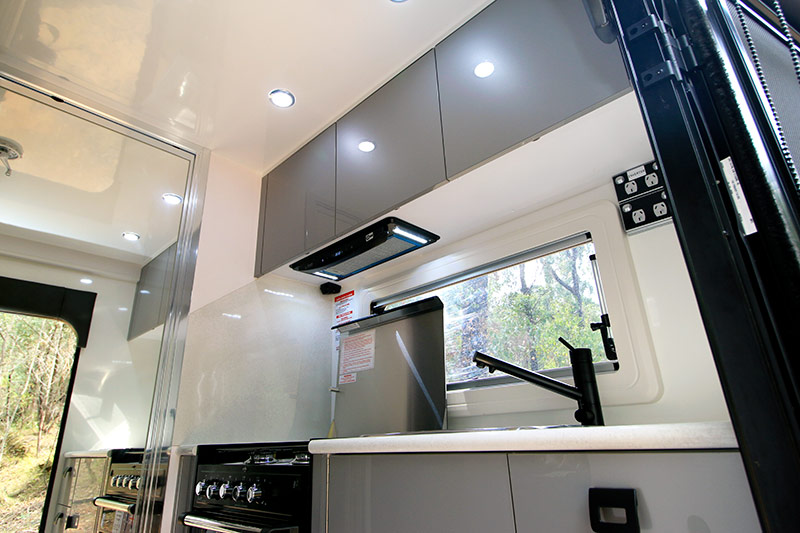 Another point of difference between the Crusader CRV Hurricane and the other CRVs is the fridge. The Hurricane has a 188L compressor fridge, while the Gladiator’s is 140L and the Esperance’s is 108L

The kitchen is equipped with a four-burner cooktop and griller, a rangehood and a sink with black tapware, along with a cupboard, overhead lockers and some drawers. 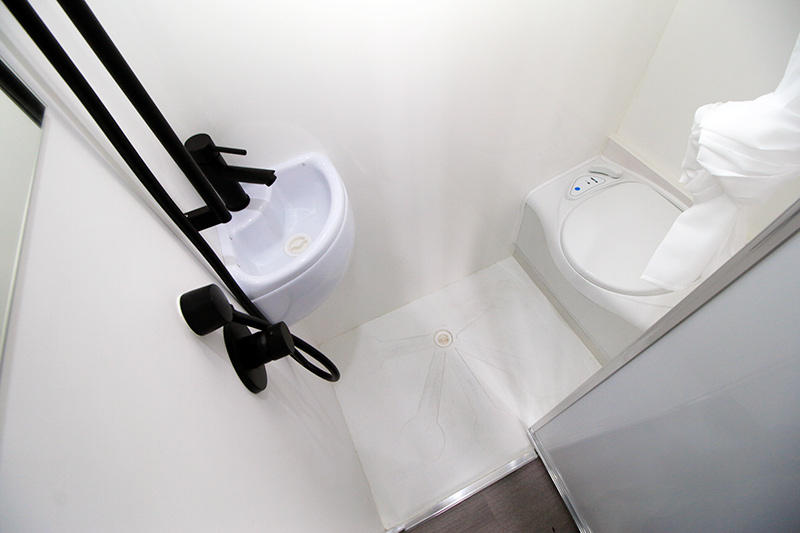 The combo bathroom, meanwhile, is the same as in the other CRVs: fully moulded fibreglass with a cassette toilet and hand-held shower rose. However, the shower head and taps are black in the Hurricane for a classy, high-end finish.

In my opinion, the layout works very well for two people. No, it doesn’t have the kitchen bench space or dining space of larger vans, but the entire point of the CRV range is to offer reasonably light, compact caravans with as much equipment as possible. On that measure, Crusader Caravans has succeeded.

With 17in alloy wheels, protection to the grey water plumbing, easy towing characteristics and tough fibreglass construction, the Crusader CRV Hurricane appears to be an excellent option for couples who don’t want to tow a massive caravan, or who are otherwise happy living in something smaller. 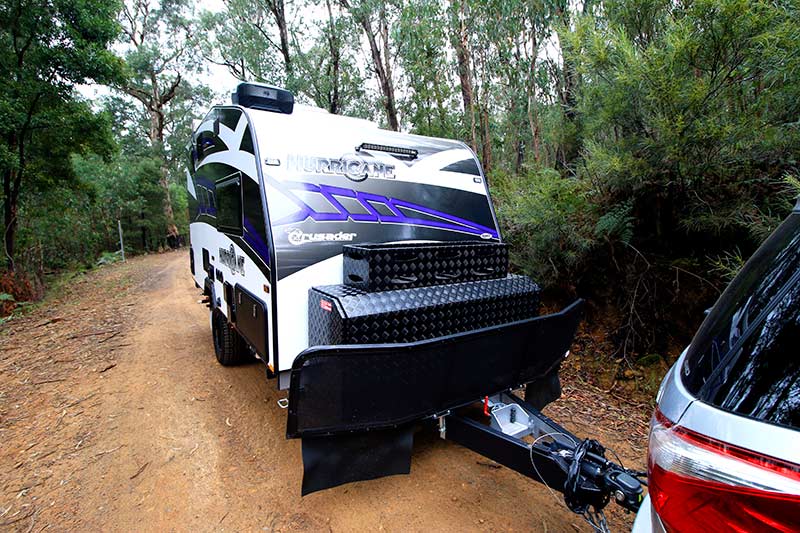 It offers almost every feature and comfort of caravans almost twice its size and is an excellent match for most modern mid-size 4WDs.

While the Gladiator is currently the best-selling Crusader CRV, it’s hard to see the Hurricane not proving equally popular in time.

Chassis: 6in Intelligent Engineering with 6in drawbar