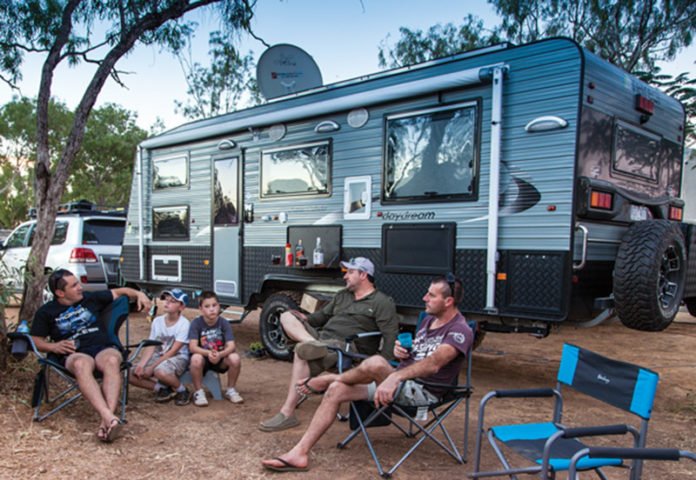 Caravan payload. There’s no getting around this crucial aspect of caravanning. Everything you load into your van, from the water in the tanks to the flour in the cupboard, will erode the payload allowance of your caravan, motorhome or camper trailer.

How do you calculate the payload allowance? Fortunately, this is the easy part. Simply subtract the Tare weight (the unladen weight of the van, as it left the factory, minus any dealer-added features) from the van’s Aggregate Trailer Mass. Whatever the difference is in kilograms is the amount of combined weight you can allow for everything you put into the van.

Simple, right? Not so fast. While calculating payload requires only a little grey matter, getting it wrong can have serious consequences. Let’s deal with them first.

If you overload your van, you’re not only putting the stability of your van at risk, you’re jeopardising the safety of yourself and other road users. In the event of an accident, if you’re found to have done the wrong thing it’s not likely the warranty of your vehicle and van will be honoured, and I can’t imagine your insurance company sticking with you. The legal consequences could be worse still.
With all of this is in mind, I decided on an experiment: individually weigh the objects we have permanently packed in our family van, along with enough provisions for a couple of days of vanning. The results were very instructive. Who would’ve thought, for example, that a simple camp chair weighs almost 5kg? 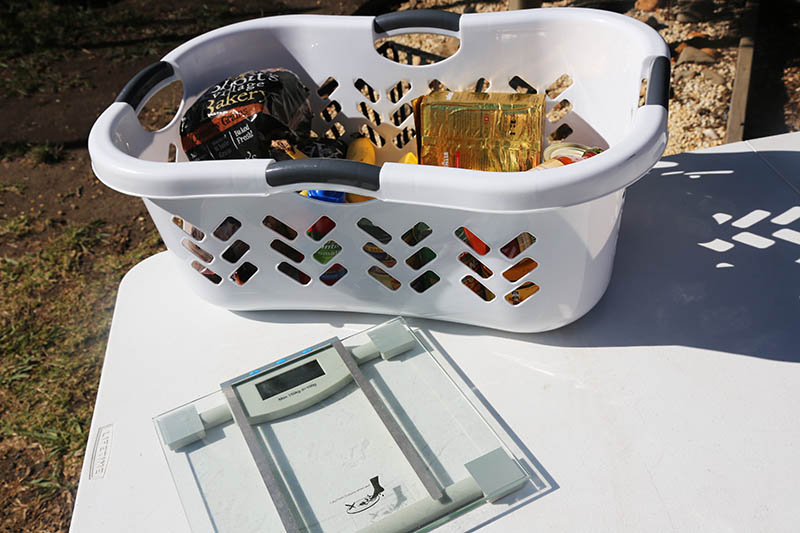 My wife and I have three kids, 9, 5, and 2, which means we need to pack fairly generously for long trips; for short trips, however, we try to keep things light. Our van’s Tare weight is 1525kg, while the ATM is 2000kg. This gives us a payload capacity of 475kg – reasonably generous for a single-axle rig.
The van has two water tanks, with a combined capacity of 120L, and two 9kg gas cylinders. For the purpose of this exercise, I have assumed both water tanks and gas cylinders were full which, at the outset, erodes my van’s payload capacity immediately by 138kg. Therefore, we have 337kg left to work (475-138=337) with when packing food, clothes, those heavy camp chairs, etc.

My van has an unladen ball weight of 154kg and a maximum permissible weight of 200kg. This means that, when the van is fully packed, I have to ensure the ball weight of the van doesn’t increase by more than 46kg. I didn’t measure this as part of this exercise, thanks to a broken set of ball weight scales, but it’s worth pointing it out here so as not to give the impression that measuring ball weight is unimportant.
Throughout this exercise, I tried to be as precise as possible and used the most sensitive scales to which I had access. Instead of weighing some items individually, such as fruit, I weighed the bunch as I felt that would more realistically reflect how we pack.
So let’s get out the scales and start weighing… 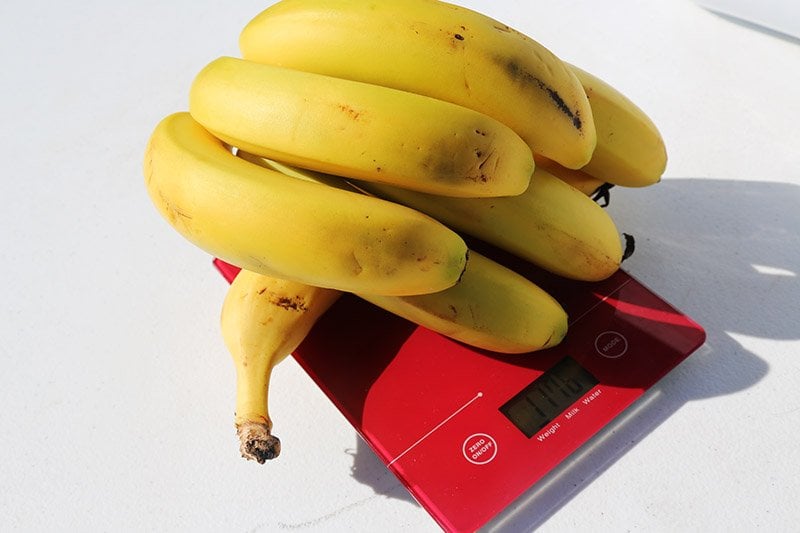 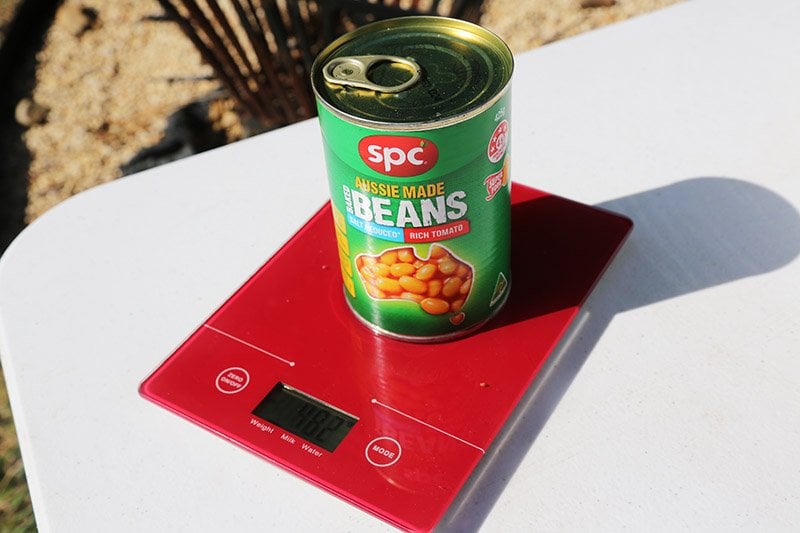 So far, so good. Only 17.5kg in food for about two days. In case you’re wondering, the chick peas, once roasted, make a great snack. Are there items here that I should’ve packed for a couple of days? Yes, probably. After the exercise, I noticed I didn’t pack much in the way of lunch food. This is why my wife packs the food…

Is 5.65kg realistic for refrigerated items for two days? You decide. In truth, it is probably a little light-on for a family of five. I could’ve easily added fresh tomatoes, cucumber, lettuce, etc., which would’ve brought the sub total up a little. 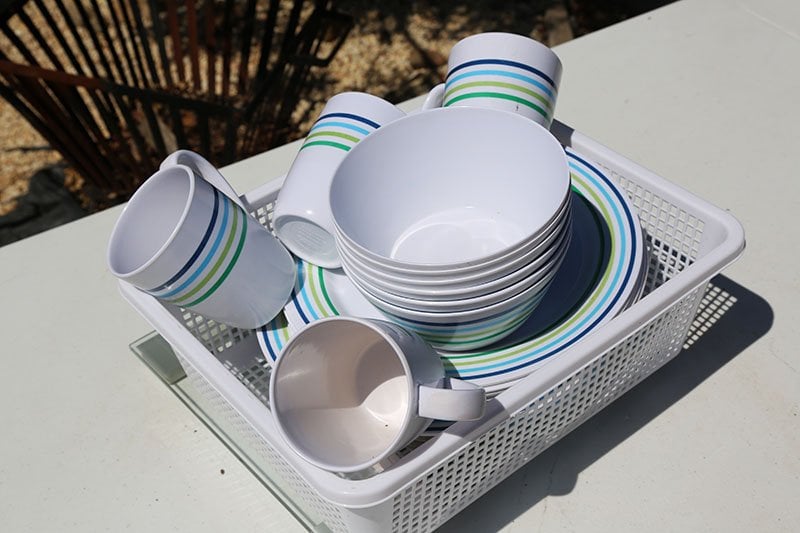 These are items that are permanently stored in the van. Our cookware is quite light as we use the collapsible variety that you can purchase from camping and RV accessories stores. The body of the cookware is made of silicone and has a metal base.

16.7kg (clothes for two adults and three children, including the weight of the suitcases) 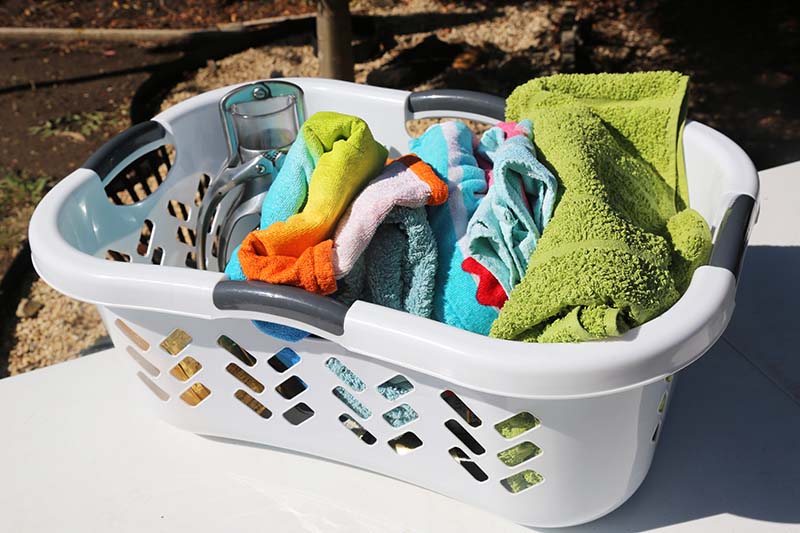 There were no major surprises here, other than the weight of the van’s owner’s manual. Filled with the instructions for all the different components of the van, from the awning to the hot water heater, it is quite hefty.

I kept the toolkit to a minimum but, were I packing for a longer trip, I would need to account for a few extra kilos here.

As mentioned earlier, for the purposes of the exercise I’ve assumed that both the water tanks and gas cylinders were full. Yes, to save a bit of weight, I could travel only with one full gas cylinder but I personally like to make sure both water tanks are full before leaving home.

As the figures show, for a couple of days away with my family, I’m well and truly legal in how I pack. Yes, I could’ve included more food (in fact, there’s no way my wife would’ve agreed I packed enough) and a few toys and books for the kids. But, fortunately, I know now that I have more than 200kg to spare with which to pack these things.