The Frances, I’m told, is the most popular caravan in the Avan ‘name’ range. Among the Avans named Ray, Erin, Lily, Charlotte and so on, the Frances tops the list, selling about 300 each year.

But what is it about this van that resonates with the caravanning public? What makes it so popular?

The ‘name’ range is available in many different layouts and sizes, and most of them are well and truly under 2000kg Tare.

The Frances weighs in at 1490kg unladen, with a ball weight of 135kg, making it immediately attractive to caravanners who don’t have or want a large 4WD. And then there’s the van’s proportions. Its 5.4m length (external body), relatively svelte 2.39m external width, and single axle, make it particularly manoeuvrable – the Frances, I discovered, turns on a 20c piece. Negotiating shopping centre carparks should be a breeze.

Avan has also released its major interior update package, the Allure package, to the Frances, and we wasted no time hitching it up for a closer look.

In standard format, the Frances has no offroad ambitions – it is primarily a blacktop touring van. But to give it some rough-road appeal,  it can be fitted with Avan’s Adventure Pack, though this will increase the van’s weight by about 170kg and its ride height by 200mm. 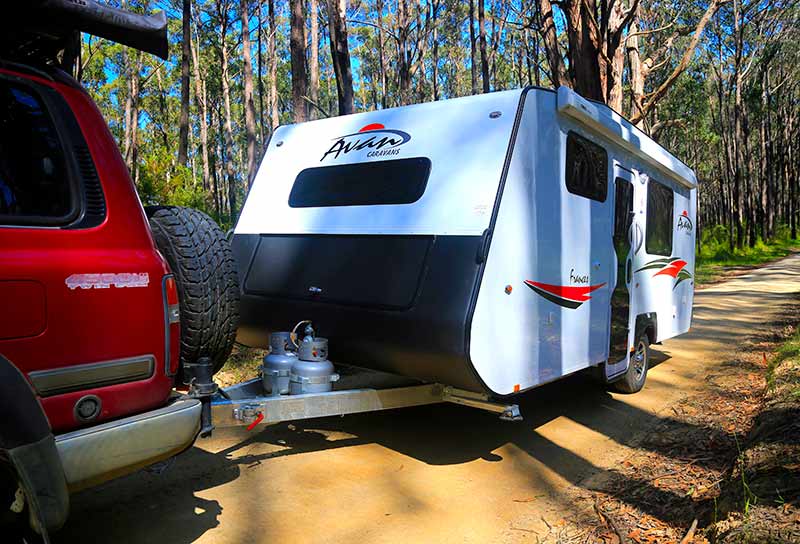 Under tow behind my old Land Cruiser, it towed without compunction at 100km/h. It was perfectly composed on the highway, on tight, winding roads and the unsealed roads that comprised my testing ground.

The exterior of the van is fairly straightforward. There’s a Thule awning and awning light, a couple of 4.5kg gas cylinders on the A-frame and, as with all Avans, a 15A lead that retracts into the van when not in use so that you don’t need to lug a power lead in the boot during your travels.

Beneath the Frances, you’ll find two 95L water tanks, enough for about five days off town water, if you’re frugal, while the back of the van is home to a bumper-mounted spare wheel – all fairly standard.

In terms of external storage, the van is limited to the gal-lined front boot. Personally, I think the van would benefit from a hatch at the front nearside, too, to allow access to the under-bed storage space. A 12V point and a fold-down picnic table wouldn’t go astray, either.

The reason the exterior of the Frances is so straightforward starts to become clear when you consider its price. Now, it’s worth remembering that the Frances is built to attract budget-conscious buyers, and in standard format, with the traditional Avan ‘timber-look’ interior, it retails for $46,990. The Allure package adds about $6000 to the price of the van. 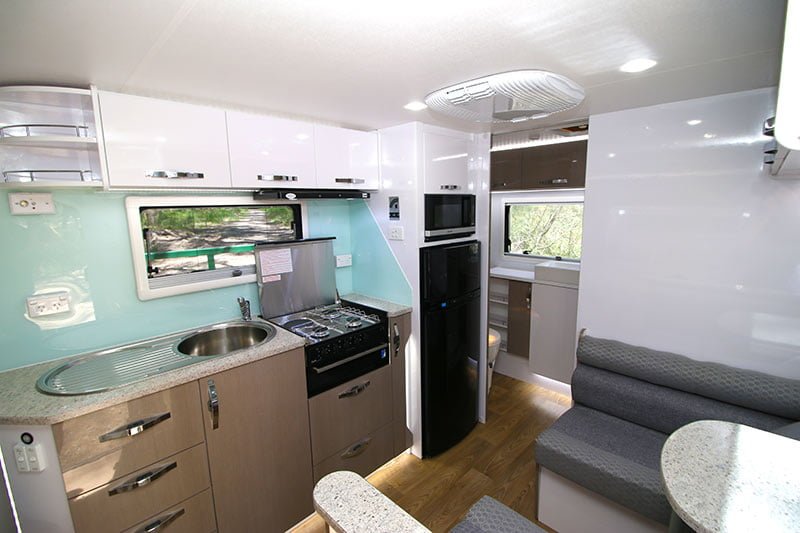 First and foremost, the Allure package, which is being rolled out across the range, lends vans to which it’s fitted a clean, white, modern aesthetic. It’s comprised of lots of LEDs, which are strategically positioned for maximum ambience, enhanced facings for the cupboard and locker doors… and even a wine rack. It’s all quite classy.

While the interior comes together very well, the joinery on the magazine holder wasn’t as close as it could be, but elsewhere it was fine.

There’s a couple of USB charging points at the end of the kitchen bench and one inside each wardrobe, either side of the bed. The offside wardrobe has a false floor, beneath which is stored the aforementioned 15A lead.

Under the bed, you’ll find the onboard battery and charger, while in the front offside corner, beneath the wardrobe that houses the power lead, is the Swift hot water service. Speaking of which, the Frances does away with the standard Swift switch in favour of two neatly labelled switches at the end of the kitchen bench, one for gas operation, the other for electrical.

The kitchen is short on bench space, with the sink and cooktop/griller taking up most of it, but there is an extension piece that slides out from the forward end, which should assist with meal prep. Aside from the wine rack, there’s a stainless steel rangehood, a microwave, a Thetford three-way fridge, and a decent amount of storage space, from overhead lockers – including one above the microwave, to cupboards beneath the 18mm ply kitchen bench.

The dinette is perfectly comfortable for two, with its tri-fold table, overhead lockers with LED strip lighting beneath, and slide-out footrests (rather than the snap-up variety in common use). 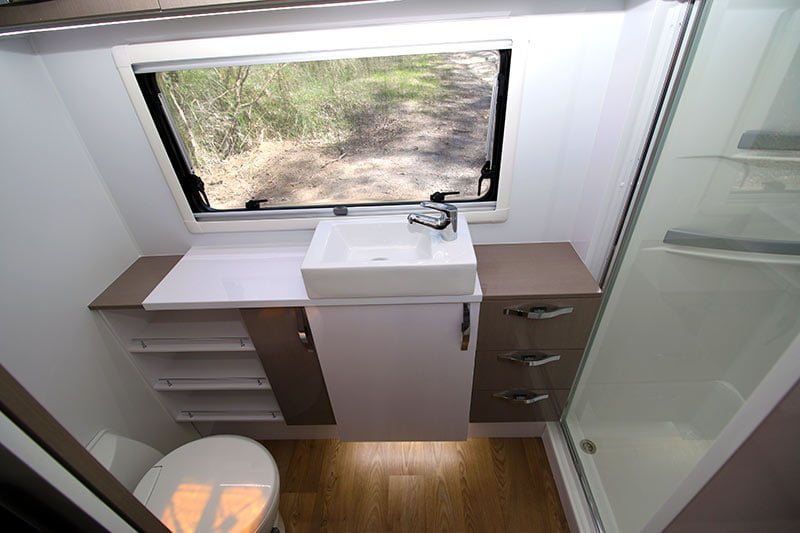 The bathroom is reasonably spacious, and I liked that the washbasin sat atop the vanity rather than being recessed within. This design, as far as I can ascertain, serves no practical purpose. But the different levels are appealing to the eye.

As with the rest of the van, there’s a certain ‘designer’ flair to the bathroom decor, and it’s all set off by the amount of natural light that floods through the large rear window – the smallest room in the Frances is as bright as the others.

To me, it’s not immediately obvious what makes the Frances the biggest seller in Avan’s ‘name’ range. At a guess, I’d say it’s because it strikes the right balance between size and weight, without skimping on the must-have bathroom.

Are there compromises? Well, perhaps one; the kitchen bench lacks work space, but Avan has tried to account for it with the extension.

Otherwise, as a bitumen-bound 18ft couple’s van, the Frances, decked out in the new Allure package, presents as an attractive option for long-term hauls around Australia.