How does travelling Australia in a large, luxurious motorhome sound? I’m talking about a motorhome with three slide-outs, a big bathroom and a huge kitchen that’s as self-contained as possible, from power to water, to refrigeration and entertainment. I am, of course, talking about the Avida Fremantle.

Based on the Iveco 70C, with a four-cylinder turbodiesel engine and an eight-speed automatic transmission, the Fremantle immediately ticks three boxes: living space in spades; a stylish, well-made interior; and a vast amount of internal and external storage options. 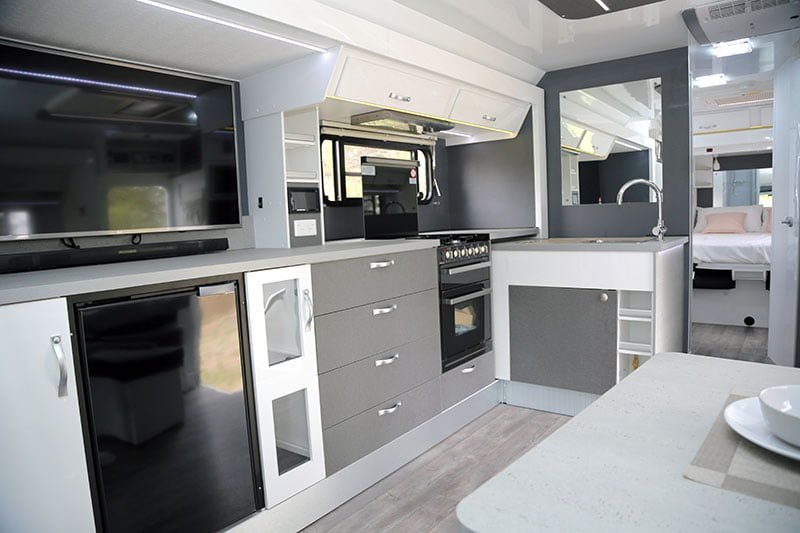 The kitchen is in the offside slide-out, while the dining area is in the nearside slide-out. With both open, you’ve got an incredibly large living area with easy access to the driver’s cab. The kitchen has the cooking facilities you’d expect but what really grabs your attention is the big-screen TV, the wine rack and the 90L compressor fridge under the bench – a 190L AES fridge-freezer is fitted to the right of the entrance, next to a full-height slide-out pantry.

With overhead lockers, drawers and cupboards, not to mention miles of bench space, the kitchen in this motorhome leaves you wanting very little. 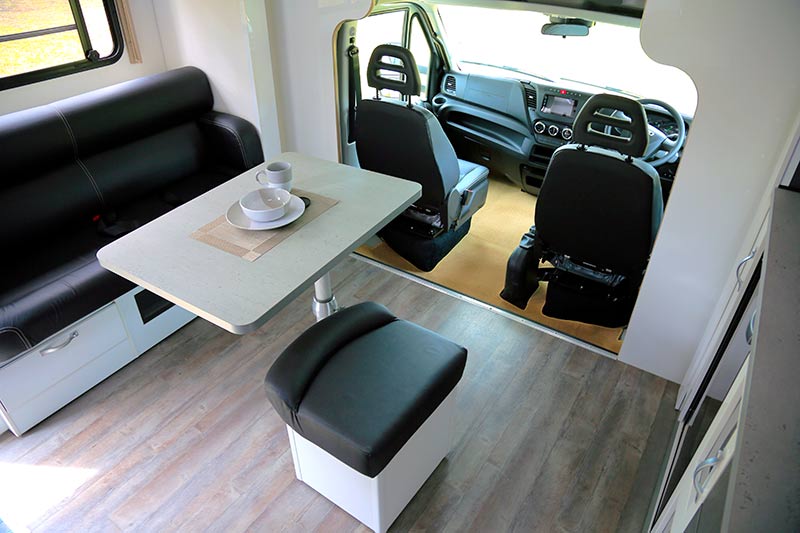 The nearside dining area comprises a two-seater leather-upholstered lounge, a removable table, overhead locker storage and more. As you’d expect, the dinette lounge has two seatbelts to accommodate the two passengers who might be sleeping in the Fremantle’s Luton peak double bed.

The bathroom is split across the two sides of the motorhome, with the shower in a separate stall on the offside, and the toilet and washbasin in a nearside cubicle. This cubicle, I’ll add, is larger than what you’d find in the average unit or flat. Truly comfortable. 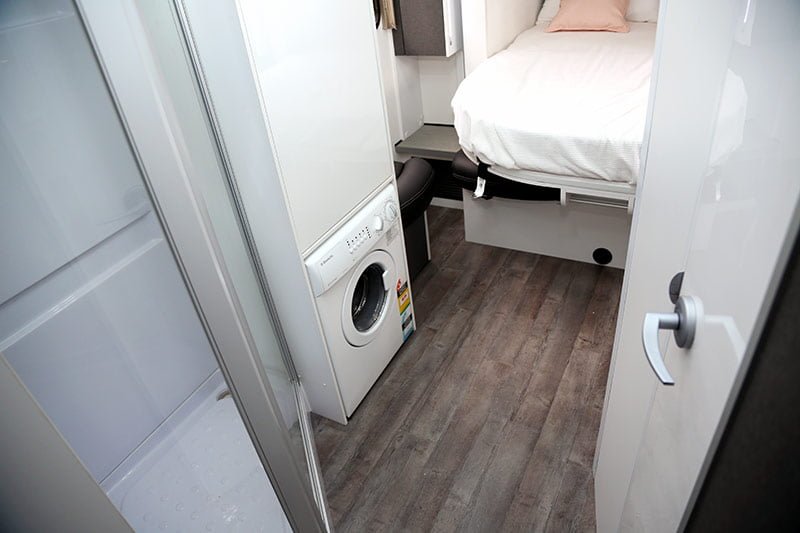 I particularly liked how the door to the vanity cubicle can be used as a privacy screen – just open it right up until it ‘grabs’ a magnetic catch on the offside, and the bedroom/bathroom is completely sectioned off from the rest of the motorhome.

This area doubles as a kind of laundry, too. There’s a Dometic front-loader mounted beneath some shelves, and on the nearside is, believe it or not, a slide-out ironing board. 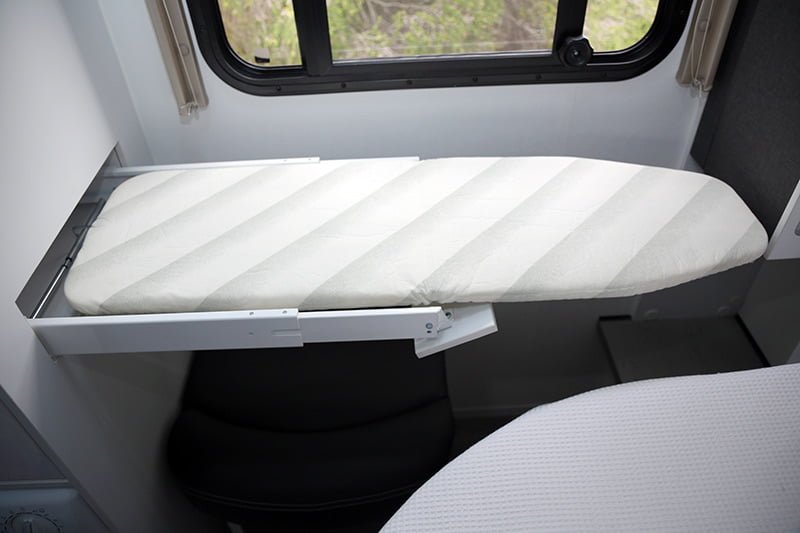 The queen-size bed is secured in the third slide-out. The mattress itself is comfortable but adding to the lux-factor is the fact the bed is electronically adjustable. Want to read in bed or watch the bedroom TV? Just raise the head of the bed to the height that suits you.

As I roamed about the Avida Fremantle, opening this and closing that, I was struck by the amount of features, comforts and inclusions. But let’s be honest: this is not an entry-level motorhome, so you’d expect a certain level of equipment. And on that front, the Fremantle delivers. In addition to what I’ve mentioned – the two fridges, the TVs, washing machine, etc. – there’s a USB device charging station, the Truma iNet system, which allows you to control the gas-fired ducted water/air heater via smartphone app, a vacuum cleaner… and even 40mm waste pipes to facilitate the better flow of waste water.

I defy anyone to step inside the Fremantle and not smile. Whether or not a big rig such as this is your cup of tea, there’s no denying its wow factor.

The features and comforts aren’t limited to the Fremantle’s interior. For example, a 2.3kVA generator (in an offside storage bin alongside the genset’s separate petrol tank) is standard – it even has a remote-start function. There is also a bin containing three 100Ah deep-cycle house batteries, a 22A charger and a 2000W inverter. Did I mention there was a solar panel on the roof, too? The bottom line: powering your appliances won’t be a problem, whether you’re in a coastal free-camp or unplugged in the Red Centre. 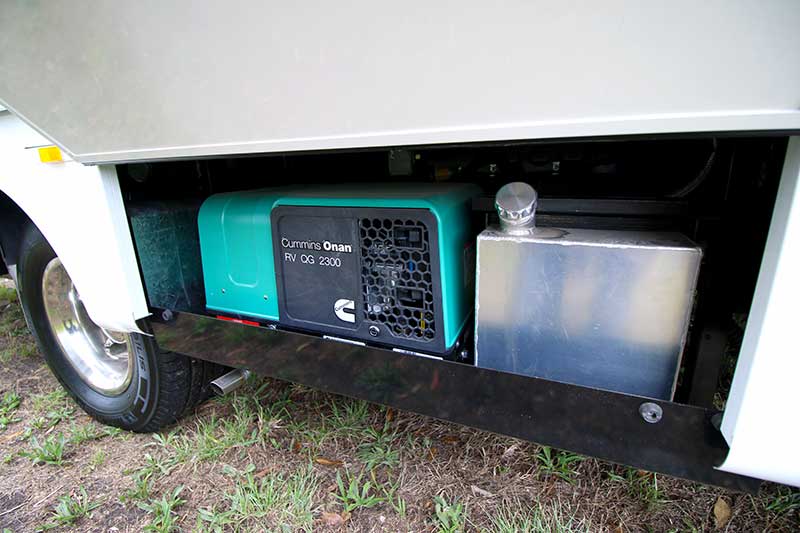 On the nearside you’ll find an electric awning and a hatch for access to an entertainment unit – the hatch lid, when open, could double as a picnic table.

A Hayman Reese towbar is fitted, too, as are some speakers, hydraulic stabilisers, an external hot and cold shower, a dead bolt for the ‘house door’, and an electronic entry step. I could go on but I think I’ve made my point. There’s a lot of gear here.

It’s one thing to have loads of equipment, but is it good equipment and has everything been well finished? Well, that does seem to be the case. For example, the genset is a respected brand (Cummins Onan), the locker doors appear sturdy and have strong catches, and some of the small touches, such as the five external LED lights moulded into the front of the Luton peak, just beneath the Avida logo, would be appreciated.

The walls and roof of the Avida Fremantle are a composite fibreglass sandwich panel. Reinforcing metal plates have been embedded into the wall at the furniture-fixing points. The floor, meanwhile, is also a composite sandwich panel, but instead of fibreglass it comprises layers of one-piece ply and a layer of aluminium sheeting to protect the undercarriage.

It’s also worth noting that all work on the Avida Fremantle, in fact all Avidas, is done in the company’s 10-acre factory in Emu Plains, NSW. The cab-chassis base vehicle arrives and works gets underway, with no elements of construction and assembly outsourced.

Avida offers a three-year factory warranty (or 1 million kilometres), a five-year structural warranty, and two years of roadside assistance on the Fremantle.

It’s a cliche to say such-and-such caravan or motorhome is like a hotel room on wheels. But many of them are, and the Avida Fremantle is indisputably one of them. The three slide-outs provide acres of living space and it seems that nothing has been overlooked. 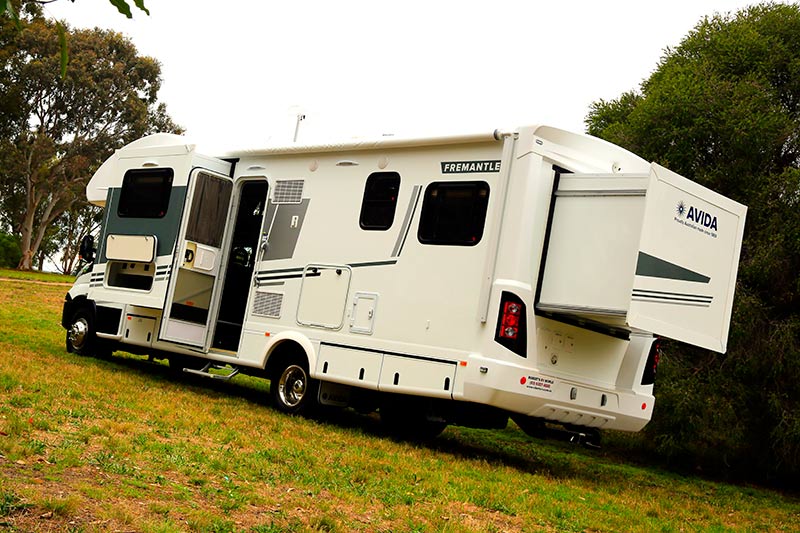 It can’t be driven on a standard car licence, however. The Fremantle’s Gross Vehicle Mass of 7200kg puts it in Light Rigid licence territory but if you were after a large, ultra-comfortable motorhome for long hauls around Australia, it would be worth the effort to upgrade your licence.

Frankly, I reckon you could live permanently on the road in this rig.

Options Fitted To This Motorhome

With thanks to Roberts RV – Avida Melbourne for the loan of the motorhome used for this review. Visit www.robertsrv.com.au for more information 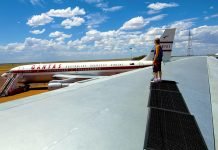