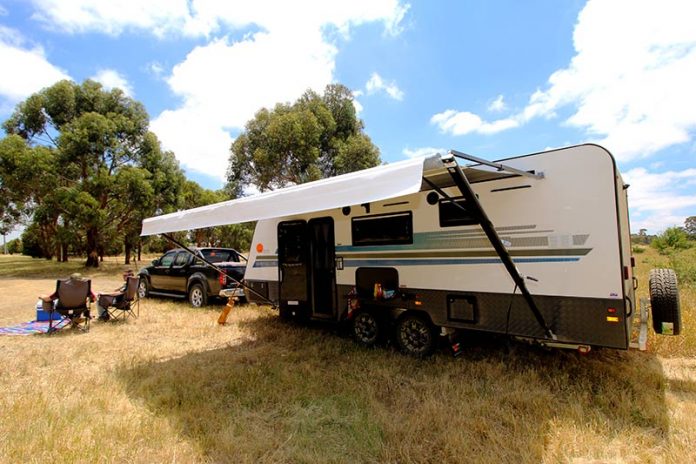 In my book, a handful of caravan manufacturers truly stand out in this crowded field. Nova Caravans is one of them.

This is not just because the company won back-to-back Caravan and RV Manufacturer of the Year awards (2017 and 2018), as well as various other accolades, but because after more than 13 years in and around the RV industry, I’ve come to respect the fit and finish, the elegance and the precision found inside these vans.

In recent years, Nova also introduced new construction techniques, which are on show in our review van, the Family Escape Signature Series 20-8C. 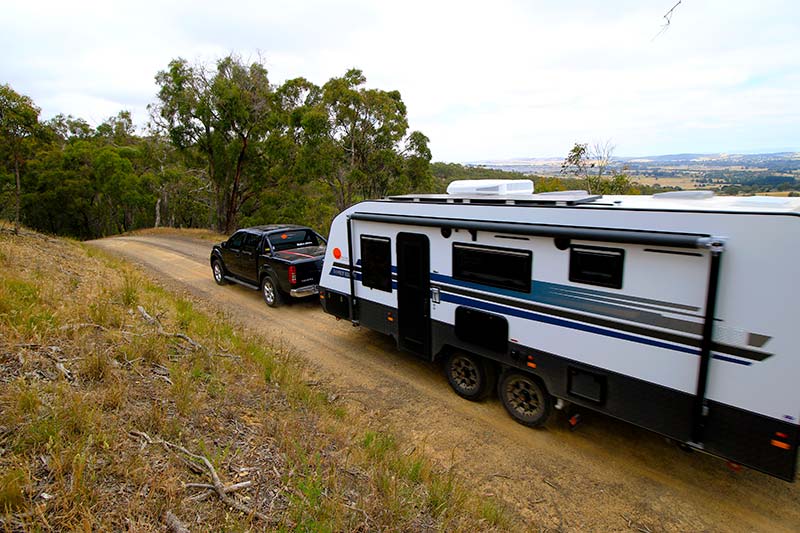 But the bigger news is that for 2020, Nova’s dedicated family caravan range is available in Signature Series format. Essentially, all the you-beaut features found in the Nova Signature Series caravan now come in the Family Escape as standard.

Nova’s national sales manager, John Sills, told me that this equated to $5000 worth of additional equipment without affecting the van’s retail price.

Nothing in this world is perfect, but some things are more perfect than others – and when a rig built by one of this country’s most respected manufacturers, of such obvious value for money, presents itself, it’s worth taking a close look…

Inside, the Family Escape takes on some of the design cues first found in the Terra Sportz offroader when it was relaunched last year. For example, the under-sink drawers have special ‘recesses’ that allow them to sort of wrap around the grey water plumbing – an excellent way to use this otherwise awkward space. 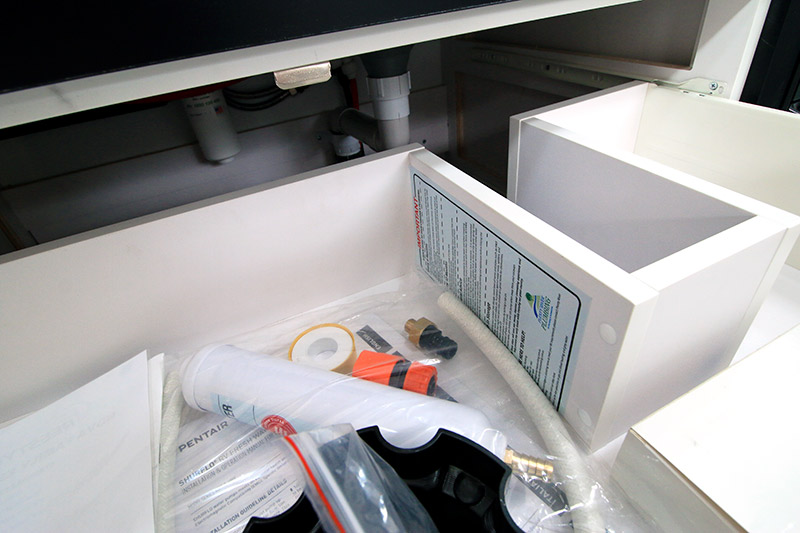 The layout is familiar, in that there’s a front bed, nearside dinette and offside kitchen, and a separate kids’ bedroom in the rear offside corner opposite a separate bathroom. Plenty of vans use this layout.

However, Nova Caravans has done it particularly well, not just in the space given to each living zone, but in the detail throughout.

In the nose of the van, the queen-size bed is surrounded by overhead lockers and wardrobes. Each wardrobe has a niche with 12V/240V powerpoints – not having somewhere to charge and store your devices when in bed in the 21st century is a frustration, so I particularly like this feature.

One small change I’d make: the offside 240V point is where the hot water service plugs into – I’d fit a double powerpoint here instead of the standard single outlet.

The lower wardrobe cupboard on the offside is occupied by the van’s gas/electric hot water heater; however, when you take into account the large under-bed storage space, overhead lockers, etc., you’d agree that there is no shortage of bedroom storage space. 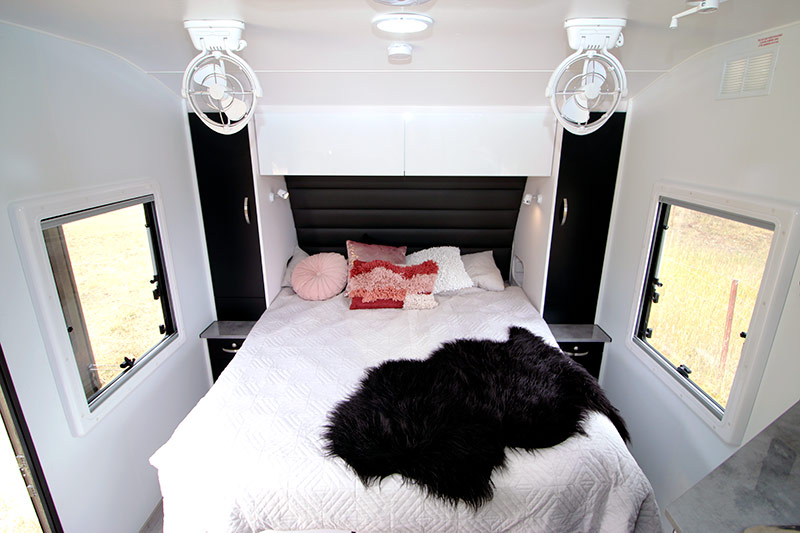 I particularly liked that Nova had fitted ‘his and hers’ 12V Sirocco fans to the ceiling, at the foot of the bed, so each person is assured of an equal stream of cool air as they try to sleep.

Such is the high standard that if anything lets the kitchen down, it’s the lack of bench space. However, having catered for a family of five in kitchens with this common problem, I know that it’s just as easy to use the dinette table or the glass lid over the four-burner cooktop (a griller and oven is standard, too).

The question is, would you prefer a larger van (which would add weight and increase fuel consumption, etc.) for the sake of a foot of extra benchtop space? I know which I’d prefer. 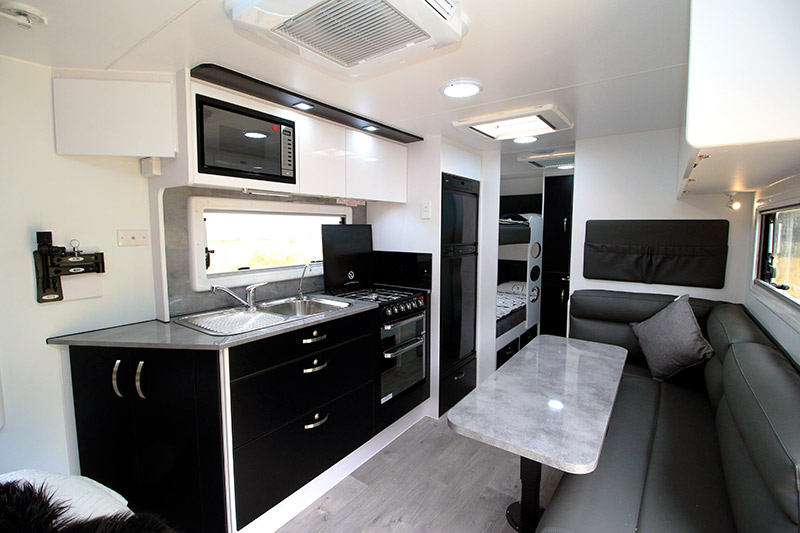 The microwave is very neatly recessed into the overhead cabinetry, while classy downlights mounted to a strip of ply on the ceiling add a touch of sophistication.

The L-shaped dinette comes with the usual LED reading lights and overhead lockers; however, in one locker is the RV Wi-Fi system that’s included with this van. In the same locker, you’ll find a switch to choose the power source for the hot water service (electricity or gas), and a separate isolating switch for the HWS, fridge and Belaire 3400 reverse-cycle air-conditioner. In this same locker, Nova has also fitted the control centre for the onboard Projecta 12V system.

I liked that in yet another overhead locker, Nova has hidden the onboard sound system – hiding this sort of equipment makes a much classier interior, in my opinion.

The fridge is a family-friendly 184L Thetford three-way unit – a definite plus when trying to store enough food for a family trip. 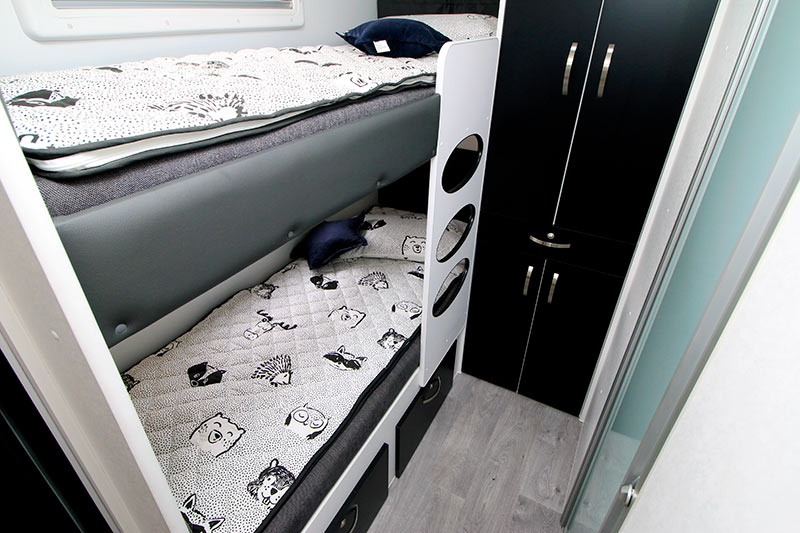 The rear bedroom is available with two or three bunks, each with its own reading light and 12V point. For obvious reasons, don’t underestimate the importance of having a 12V point in each bunk nowadays.

A large cupboard is fitted to the rear wall and I can’t complain about the storage space here, especially when you consider there’s also storage room under the bunks, accessible by a couple of floor hatches. 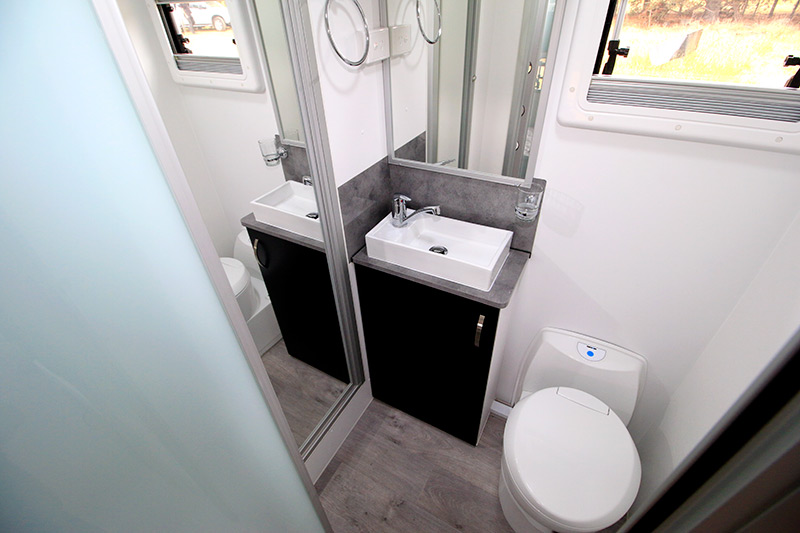 That leaves the bathroom. In the offside corner – behind the dinette, effectively – it comes with a cassette toilet, separate vanity with washbasin, and a separate shower cubicle. If you’ve ever used a combo bathroom with teenagers onboard, you’ll appreciate the privacy that this bathroom layout affords.

ALL IN THE FAMILY

The Nova Caravans Family Escape Signature Series rides on a 6in chassis with 6in A-frame. The suspension is a standard loadsharing leaf-spring setup, with 16in alloy wheels and tyres. 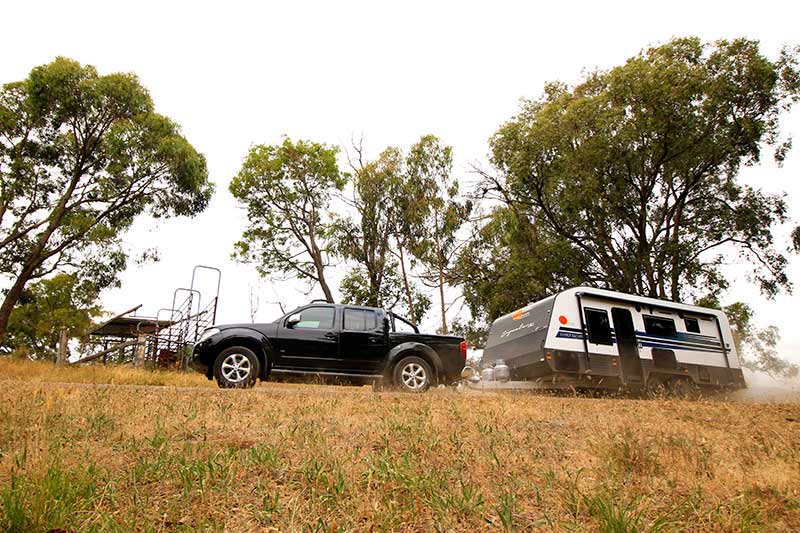 The van gets two 95L water tanks protected by galvanised steel sheeting, as well as a grey water tank. Much of the plumbing is unprotected beneath the van; however, this is not an offroad caravan.

A few years ago, caravan manufacturers began fitting the house battery(ies) to the offside chassis rail as a means to free-up storage space in the boot or under the bed. This is the case with the Family Escape, which comes standard with two 105Ah batteries that are charged by a 160W solar panel when not plugged into mains power.

The way Nova Caravans builds the Family Escape offers an important point of difference to similar vans on the market. It is comprised of Pro-Al structural aluminium sandwich panel walls and a one-piece fibreglass roof.

As strong as this structure appears to be, I really appreciated the fact that the van’s 12V wiring runs internally – to replace a wire or fault-find, it’s a matter of unscrewing the relevant service panel, rather than ripping off entire sheets of cladding.

What’s more, it’s discreetly hidden – if you didn’t know better, you’d swear the wiring was behind the wall. 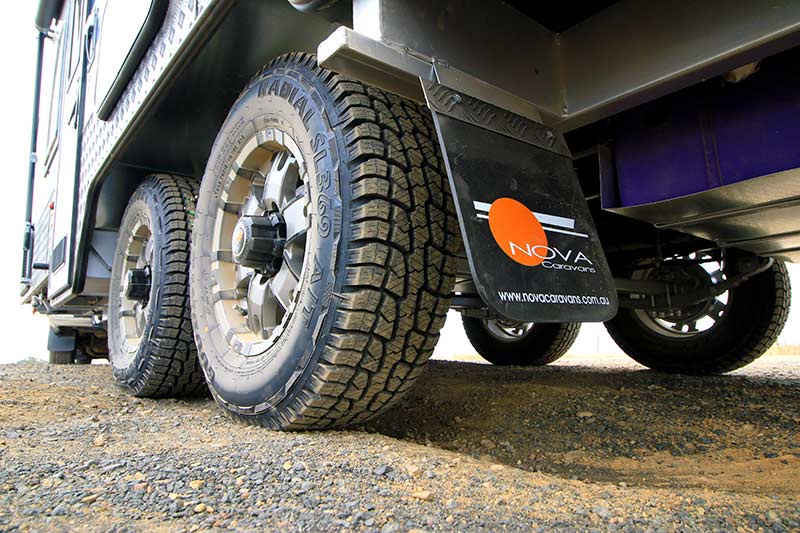 The Family Escape also comes with Al-Ko ESC – in fact, Nova Caravans has fitted this excellent piece of safety equipment almost since it first became available.

It also has a reversing camera, side picnic table, roll-out awning, LED awning lights, a 12V point, a couple of speakers, and more. Storage wise, a tunnel boot has been fitted. 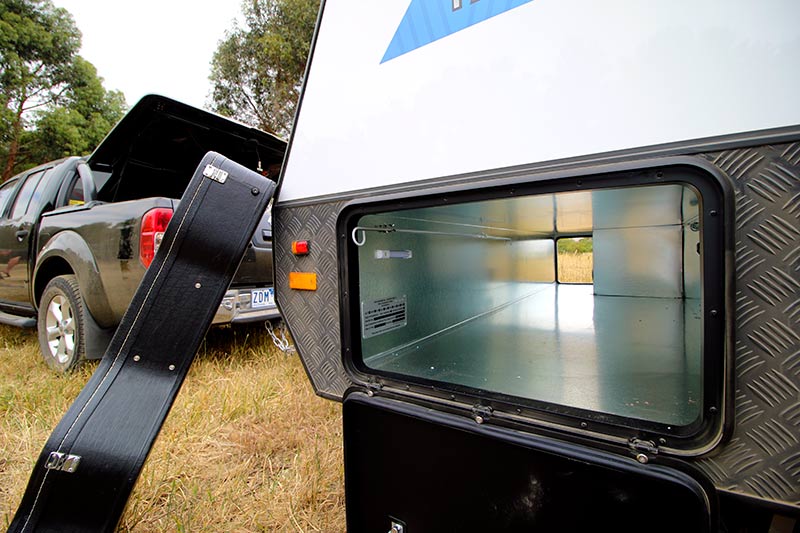 The Tare weight is about what I expected: 2391kg. The van does, however, have a more-than-generous payload capacity of 600kg. I doubt you’ll need it, but it’s there if you do. In any event, even fully loaded, the van is within the capabilities of mid-size 4WDs such as the Ford Everest and Pajero Sport.

In supplying as standard all of the features found on the Nova Caravans Signature Series, the company hoped to make this van as free-camp-friendly as it could, on the belief that more and more families were unplugging from the grid when on tour. I think Nova has achieved this goal. 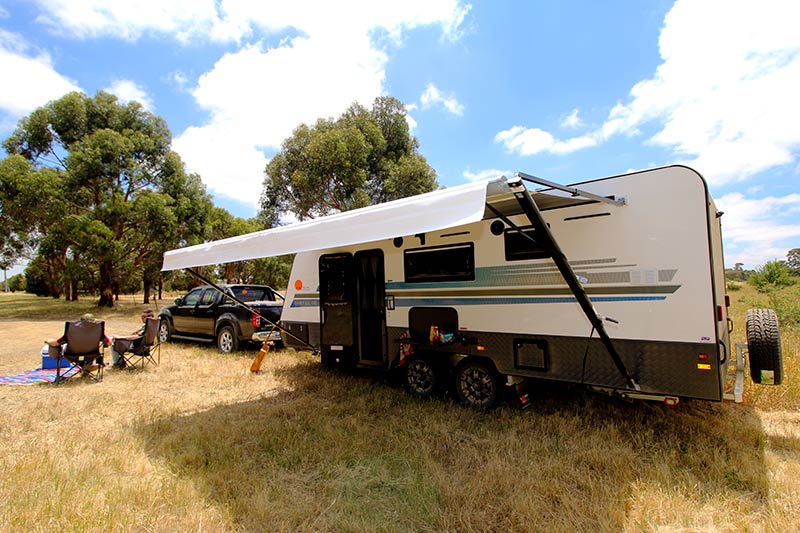