In late 2018, New Age Caravans was bought by Walkinshaw Automotive Group, the same company behind HSV.

In that time, New Age has incorporated some of Walkinshaw’s automotive technology, beginning with the Walkinshaw-designed and engineered chassis that sits underneath every New Age Caravan.

The New Age Caravans Road Owl pop-top is the latest addition to the range. It’s available in 16ft and 18ft variants. The 16-footer is a couple’s van, while the 18-footer is geared towards families. Both have a bathroom. 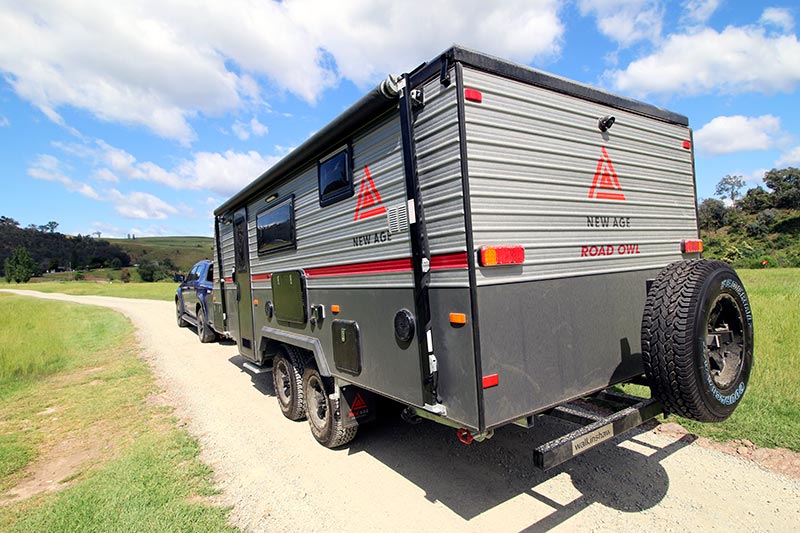 We had planned a few a few days away at Paradise Valley, an amazing campground in Glenmaggie, Vic, but just needed a suitable van. What better time to hitch up the Road Owl RP18BE?

Other than the Gecko, this Road Owl is the only family pop-top available in the New Age range. It can be purchased in a standard format, which includes most basic features, but you’d want to consider either the Comfort Pack or semi-offroad Adventurer Pack. 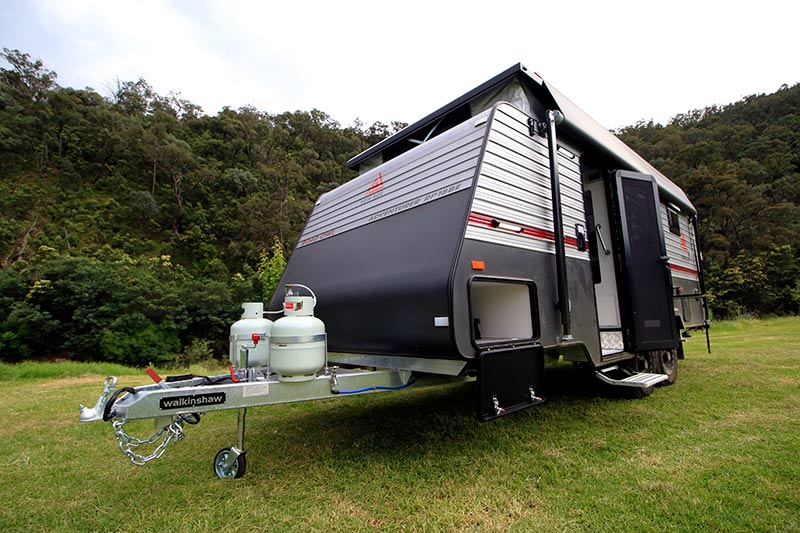 The Adventurer Pack, which was fitted to our van, incorporates all Comfort Pack features, including solar, battery and external speakers, and adds Cruisemaster CRS2, external shower, reversing camera, an external shower, a straight black bumper bar, 6in main chassis members with a 2in raiser, a tray in the A-frame, 16in wheels (15in wheels are standard), and more.

The frame of the New Age Caravans Road Owl is high moisture-resistant meranti timber, which is clad with high profile, silver stucco aluminium and a 600mm lower waist of protective Raven Coat in lieu of traditional checkerplate. The roof is a one-piece fibreglass structure. 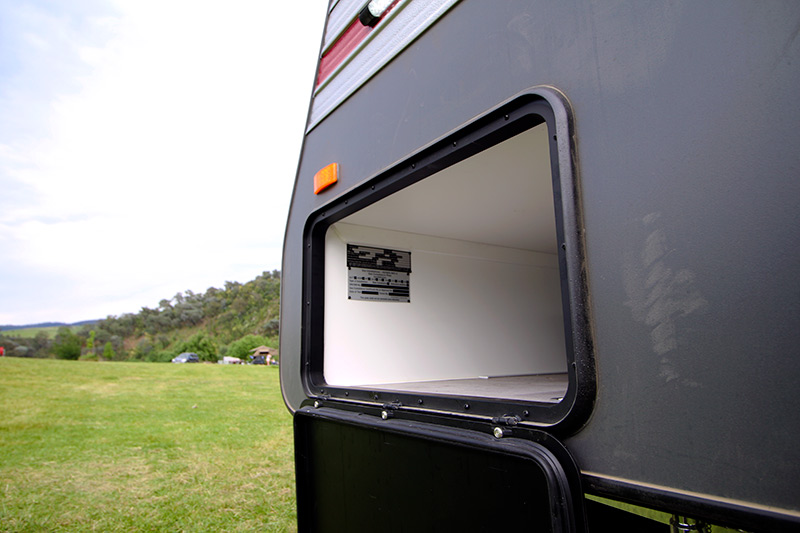 External storage is limited to the reasonably spacious tunnel boot up front, which is accessible from either side of the van.

The New Age Caravans Road Owl uses a number of BMPRO devices: the Trailsafe break-away braking system, which has Bluetooth and wired connectivity options for in-vehicle monitors, and also works off the van’s battery (no additional battery required); the BMPRO SwayControl system; and there’s a BMPRO Trek digital display inside, which gives real-time information on the van’s levels, from water to battery charge, among other functions. 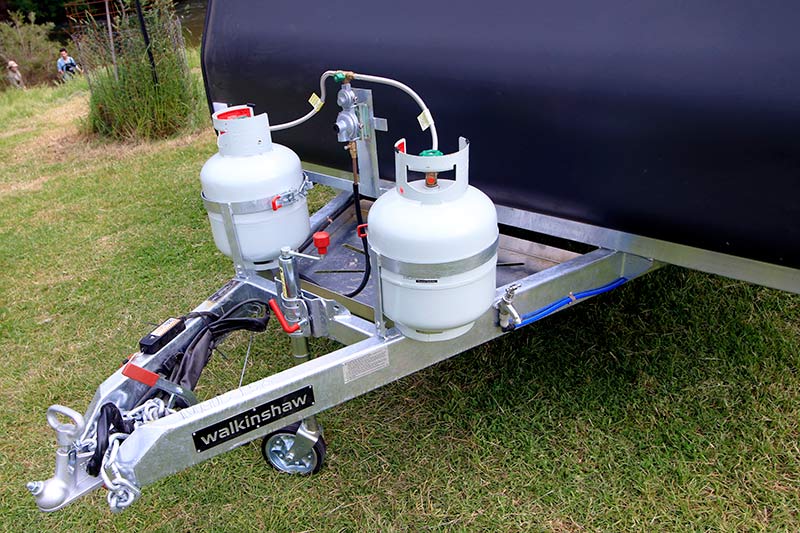 Underneath, the Road Owl was fitted with two 110L water tanks, fore and aft of the axle group. Only one water tank is standard – a second tank is part of the Comfort/Adventurer Pack.

Now, while the underside of the van is quite ‘clean’ and well thought out, the outlets for the water tank seem a bit exposed. Perhaps I’m being overly cautious, but since it’s equipped for semi-offroad travels, a bit of protection here might be a good idea. The same goes for the fresh water tap on the A-frame. 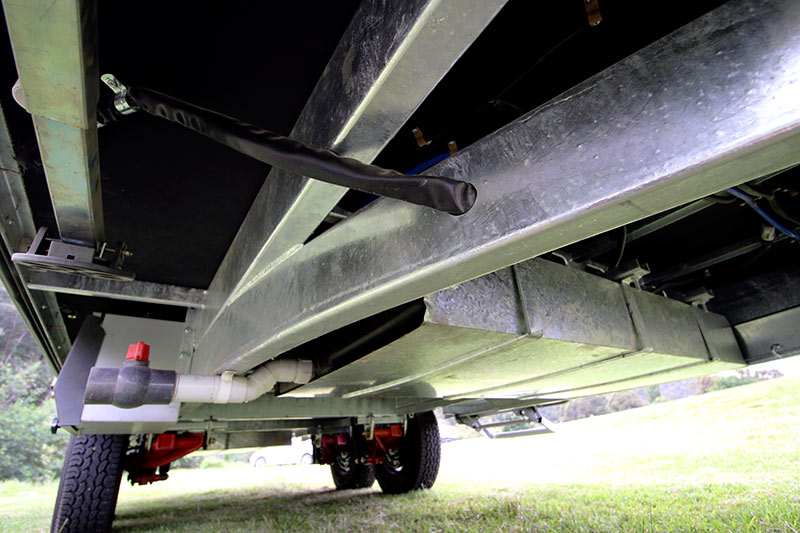 On the offside, you’ll find a hot/cold external shower, always a welcome feature, and a reversing camera at the rear. Both are fitted as part of the Adventurer Pack.

The 6in drawbar, which runs back to the sports a recessed ball coupling, a centre-mounted jockey wheel, and dual gas cylinders (a second cylinder is provided as part of the upgrade pack). I would consider adding a stoneguard to the A-frame, though.

Weighing 2200kg Tare, and with an ATM of 2800kg, our Road Owl provided a payload capacity of 600kg, which seems perfectly acceptable to me. On the open highway, and along the winding country roads en route to Paradise Valley, I experienced no difficulty with its towing performance. It was quite manoeuvrable around the campsite, too.

Inside, the New Age Caravans Road Owl presented as somehow more spacious than other 18-footers I’ve looked at. With an east-west bed up front, an amidships kitchen and dinette, and rear bunks and bathroom, the layout comes together in a sensible and cohesive way. 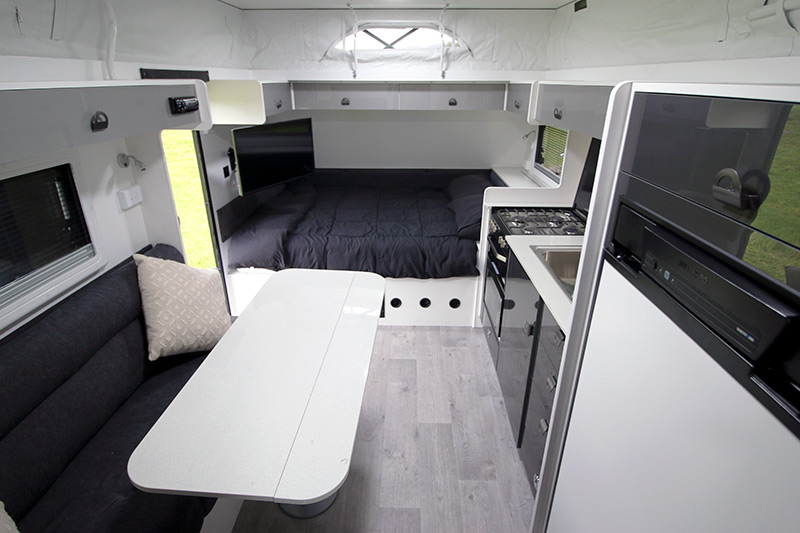 The fact New Age managed to include a separate bathroom, which itself contains a separate shower cubicle, into this layout, still surprises me.

There is nothing unusual about how the Road Owl sets up. Simply release the four corner over-centre catches that secure the roof, set the awning to ‘open’, and use the levers inside to raise the roof. Easy. 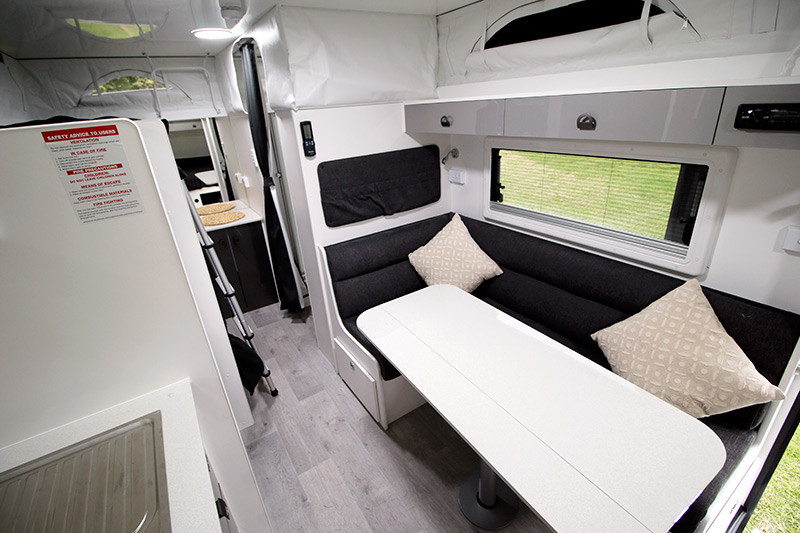 Undoubtedly, the orientation of the bed is the big space-saver – every caravan layout requires compromise, but I think it’s worth it. At the head of the bed, New Age Caravans has incorporated a couple of lockers, and a 12V and 240V point either side of the bed, while at the foot of the bed (the nearside), is the mounting point for the 24in smart TV that comes as part of the Comfort/Adventurer Pack.

The kitchen is equipped with a Thetford four-burner cooktop with griller, while a microwave is set into the cabinetry underneath. Now, kitchen bench space is very limited (another trade-off), but you’ve got the nearby dinette table to use if needs be. 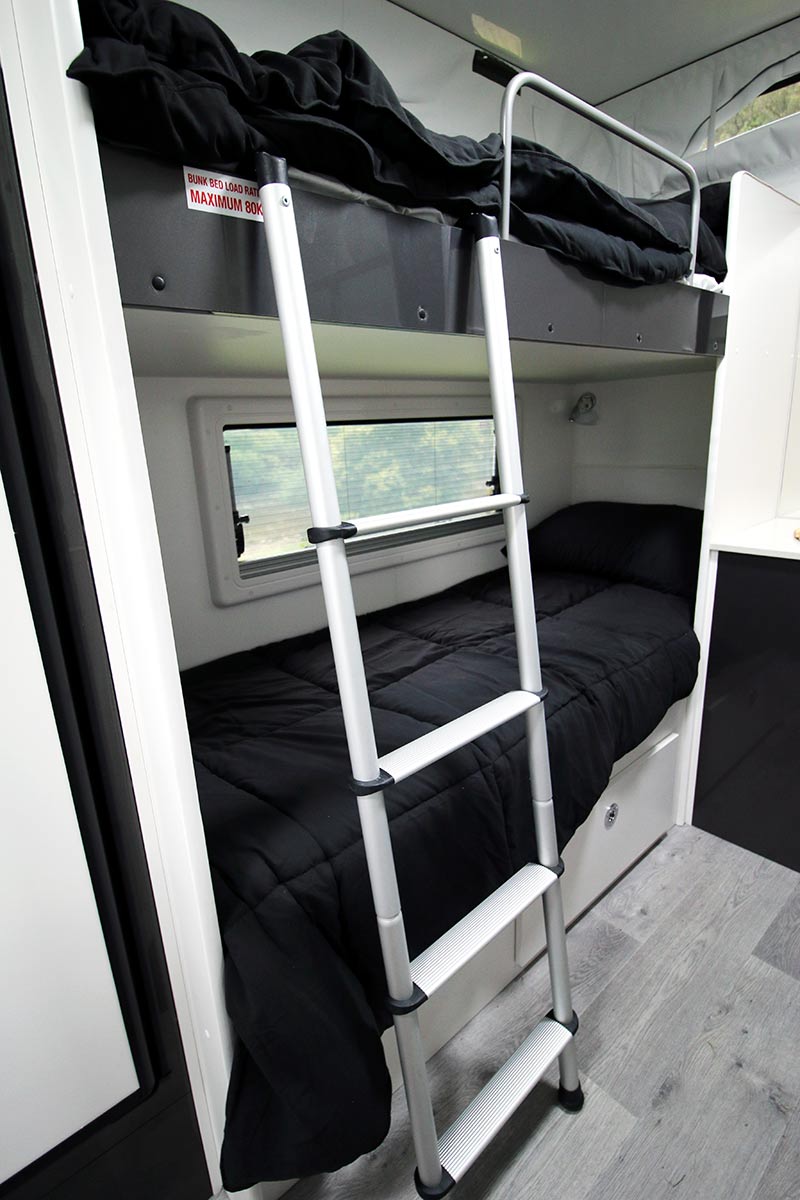 Interestingly, the dinette table is hinged longitudinally, allowing the quarter of the table nearest the kitchen to drop down, creating more walkthrough space if required. Speaking of the dinette, there are reading lights here, a 240V point near the door, but no 12V points.

Each of the two rear bunks is equipped with a 12V and 240V power point and a reading light, while the rear wall is fitted with a mirror and storage cabinet. There’s a not a copious amount of storage space for the kids here, true, but I think you would manage. 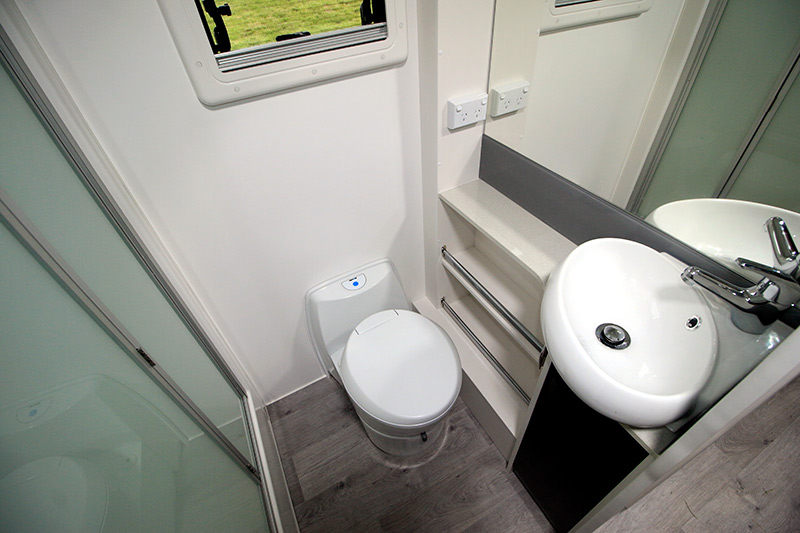 The bathroom, though, is quite impressive. It contains all the items you’d expect – cassette toilet, a washbasin, some storage space – combined with a separate shower. Again, that’s not bad considering the compact nature of this van.

Throughout, the fit and finish is of quite a high standard, too. There were no sharp or unfinished edges, poor joinery, or anything that looked obviously sub-standard to be found. New Age has lived up to its reputation in this respect.

The 18ft New Age Caravans Road Owl was a good and faithful companion for our trip. While I think some of the items found in the upgrade packs, especially the battery, would be better fitted as standard, there is a lot of appeal here. 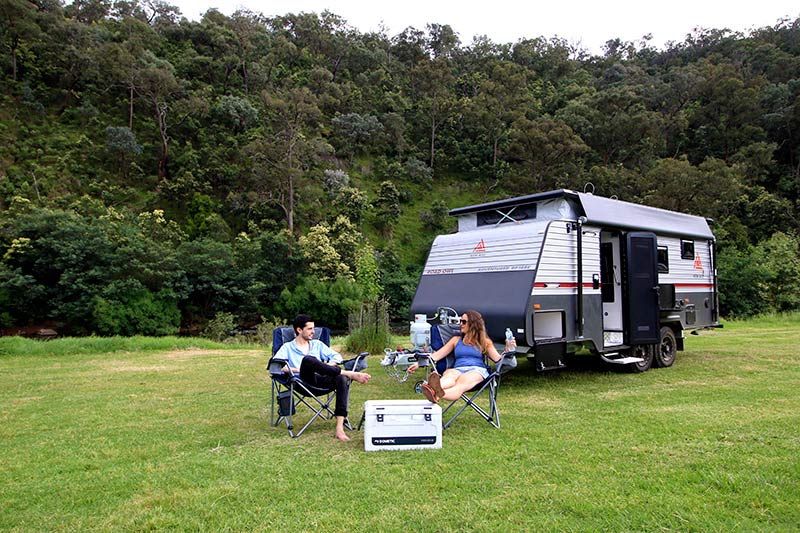 In fact, a couple of other caravanners at Paradise Valley poked their noses through and were thoroughly impressed by what they saw.

I can’t say I blame them, really. For parents and a couple of kids, the Road Owl would be quite comfortable. It makes a fine addition to the manufacturer’s line-up. 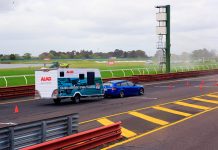