Great Escape Caravans is a boutique Melbourne caravan manufacturer. Being unfamiliar with this company’s range of vans, I jumped at the chance to hitch up the FX Family Escape Black Series Deluxe.

The company seems to have an emphasis on building family vans and, if my FX Family Escape Black Series Deluxe was anything to go by, it does it well. 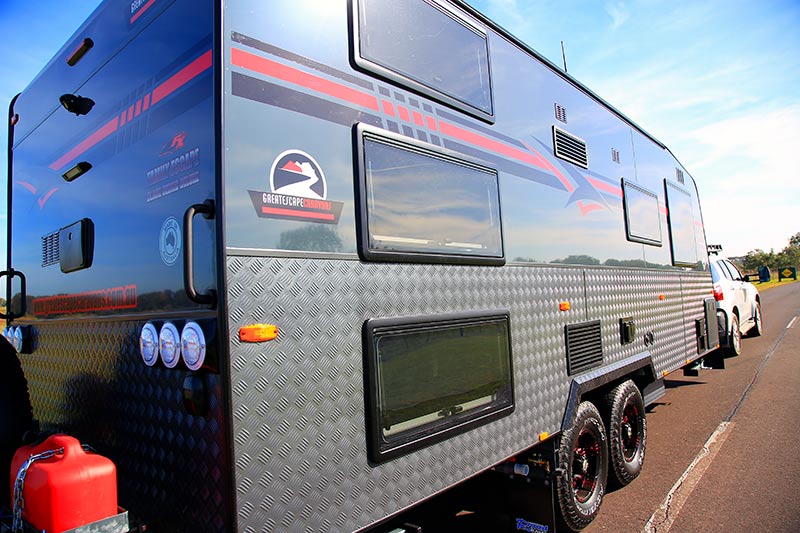 I arrived at Great Escape’s Ravenhall, Vic, dealership in late winter. The van stood proudly in the driveway on its 16in alloy wheels, its aluminium composite external cladding gleaming in the early sun.

With the van’s DO35 coupling lowered onto my towbar, I set off to give this van a thorough review.

As I hauled the Family Escape along Melbourne’s Western Highway, I experienced no side-sway or unexpected pitching of the van. It is, without question, a large rig, with an overall body length of 21ft 6in (6.6m). Its travel height of 10ft 5in (3.2m) gives it a purposeful stance on the road.

My MU-X (which has a towing capacity of 3000kg) towed the Family Escape legally and without drama; however, it is not the ideal tow tug for this van.

The Family Escape FX Black Series Deluxe weighs 2780kg Tare and has an ATM of 3500kg, so the MU-X’s stablemate, the D-MAX ute, or any other 3500kg-rated ute or wagon would be the ideal choice. 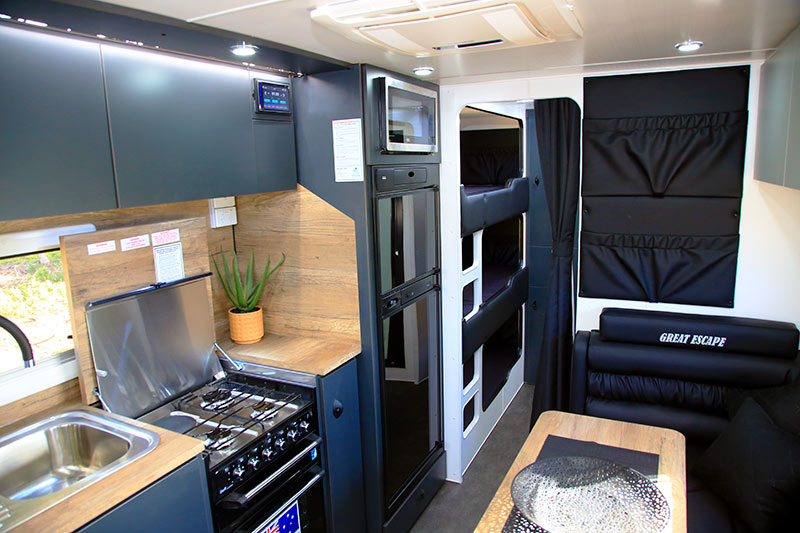 No doubt, this is a substantial rig. But what really surprised me – in a pleasant way – was the interior fitout and attention to detail. The decor was attractive – I loved the timber benchtops – but the overall cohesion and execution of the design is what appealed to me.

The layout is reasonably logical for a family van. A queen-size bed sits in the nose of the van, surrounded by wardrobes and overhead lockers. Each wardrobe has a niche complete with powerpoints, and either side of the bed gets a multi-directional reading light, a 12V Sirocco van, and Great Escape has even included a hatch at the base of the bed for access to the under-bed storage space. 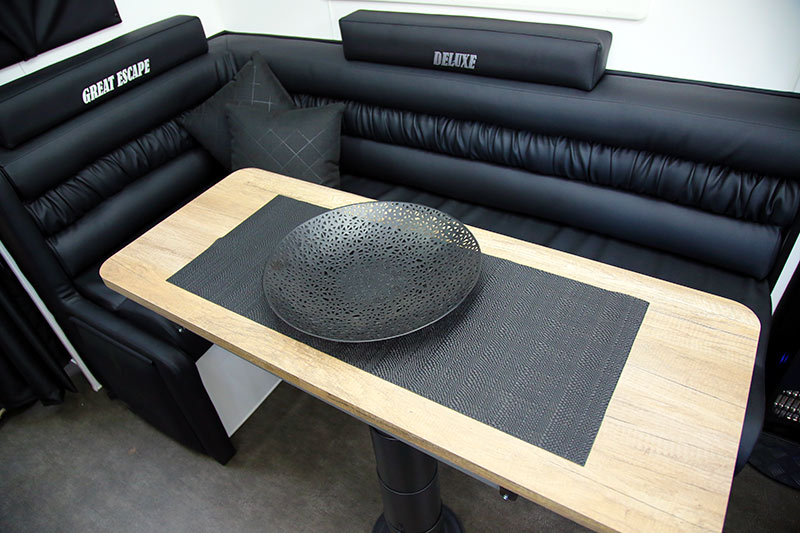 The dinette, while comfortable, would probably struggle to seat a family of five; however, in my experience, most of the time you eat outside at a portable camping table. The dinette is upholstered in Annahide, and comes compete with 12V/USB points, a snap-up footrest, overhead lockers, and the table can even lower on its central leg to form the base of yet another bed.

The kitchen, meanwhile, comes complete with plenty of storage space, including an under-bench pull-out pantry, and I loved that the pipework beneath the sink is neatly finished off – not an unsightly blob of silicone to be seen. Hallelujah. 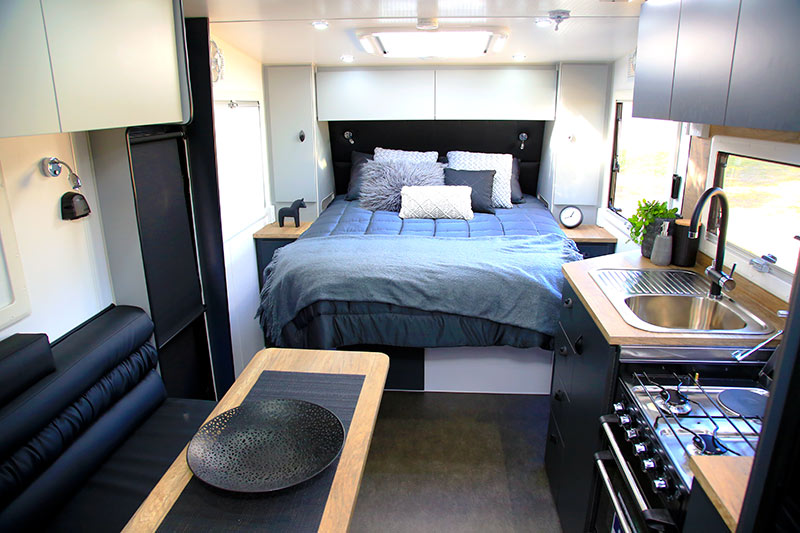 Electrically, the Great Escape Caravans FX Family Escape Black Series Deluxe is quite well fitted out. Aside from the obvious, such as the LED strip lights and the double-DIN touchscreen stereo system, it comes with a BMPRO BatteryPlus35 HA battery management system coupled with the OdysseyLink, which is lithium battery-ready for those wanting to upgrade down the track.

This system incorporates a touchscreen control console that provides instant updates on the van’s levels, from the water in the dual 95L fresh water tanks, the single 95L grey water tank, and the state of charge of the onboard 120Ah AGM batteries. This same display even allows you to switch various lights on and off, as well as the water pump. 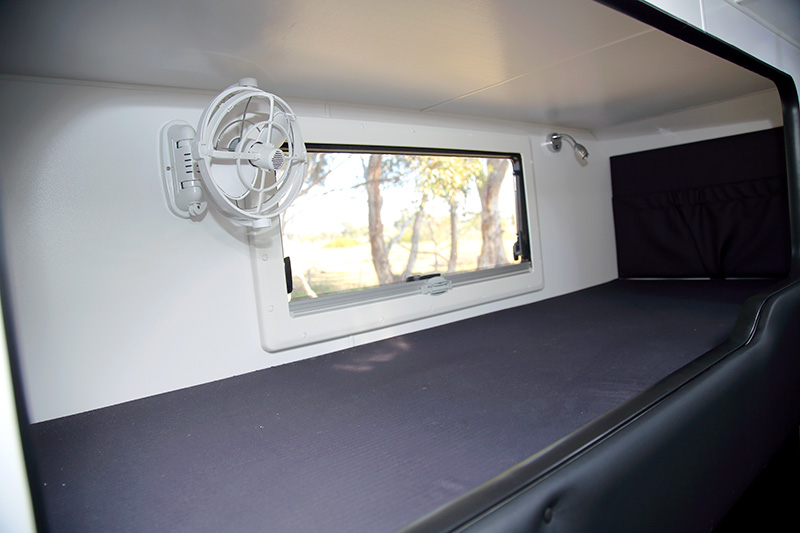 On the subject of electrical convenience, this van comes as standard with keyless entry – just touch a special fob against the handle, and the door will automatically unlock. A brilliant system.

In the rear of the van, Great Escape Caravans has fitted a full kids’ bedroom complete with three bunks, each with their own Sirocco fan, 12V point, and light. There’s no reason the kids should be uncomfortable here. 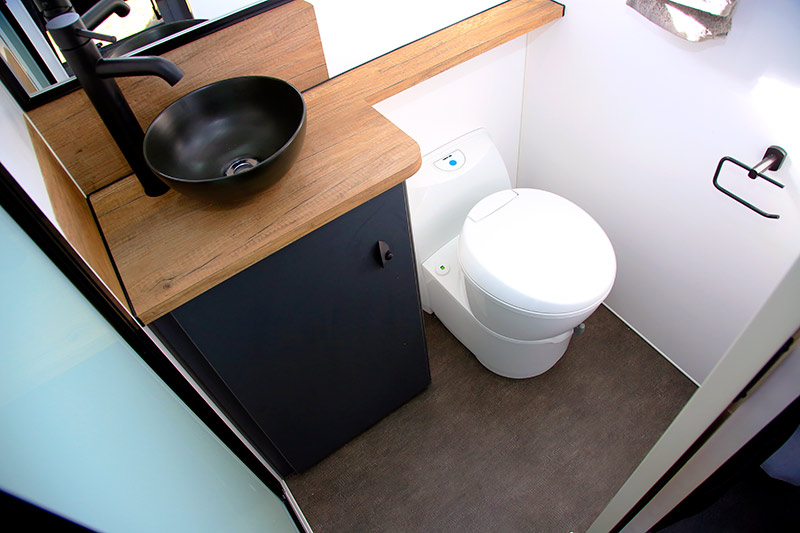 Mounted on the rear wall is a large wardrobe for the kids; however, a 4kg front-loader washing machine takes up the bottom cupboard. Meanwhile, on the nearside, you’ll find a well-appointed bathroom. This is no combo unit, either. In fact, there’s a separate cassette toilet, washbasin (love the raised black sink with stylish tapware), a large mirror, and a separate fibreglass shower cubicle. The bathroom is, in short, spacious and classy.

Classy, in fact, is the word I’d use to describe the entire internal fitout of this van.

Great Escape Caravans has set-up the FX Family Escape Black Series Deluxe so that it’s ready for free-camping, straight out of the factory. It comes standard with all the relevant gear: the aforementioned AGM batteries, two roof-mounted 170W solar panels and a 3kVA generator that’s secured to a slide-out tray on the offside of the drawbar-mounted storage box. 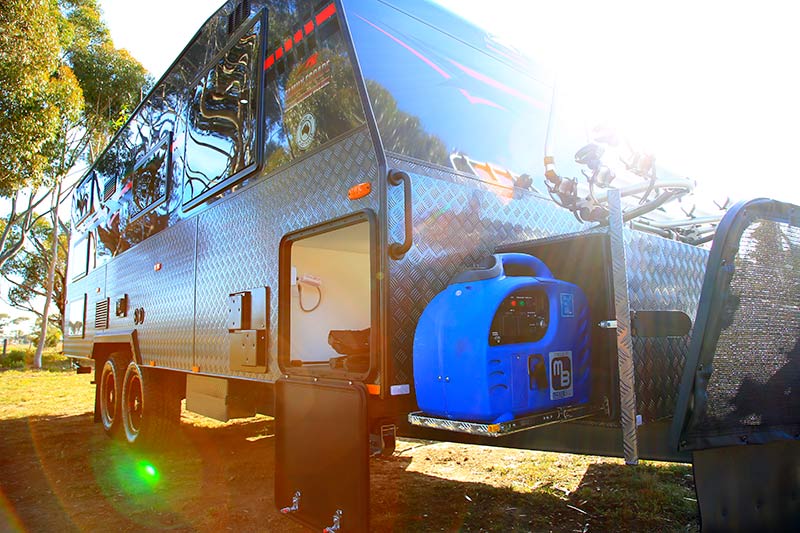 To have 3000W (peak) of power on standby is, in my opinion, a massive benefit. It will allow you to run various 240V appliances at once, while simultaneously charging the batteries.

In the tunnel boot, on the nearside, Great Escape has even included a slide-out kitchen complete with a Weber Q and a stainless steel sink with flip-up lid. The relevant gas and water connections are mounted to a piece of checkerplate that’s secured to the floor of the van. 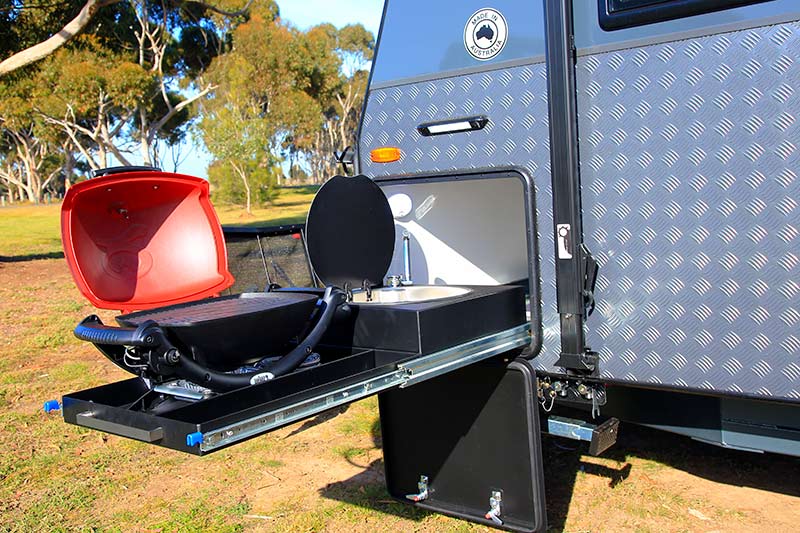 Storage space in the tunnel boot, obviously, is reduced by the kitchen; however, an offside hatch provides access to the rest of the space, which is sufficient for camp chairs and the like.

The drawbar’s storage box, however, provides some nearside storage space, and did I mention that a bike rack has been included here too?

One aspect of hitching up that I found awkward involves the position of the mesh stoneguard relative to the jockey wheel. Because the guard is so close to the jockey mount, Great Escape Caravans provides a jockey wheel with a side-winding handle. This means you need to be mindful that the handle points away from the guard when fitting the jockey wheel, otherwise you won’t be able to wind it. 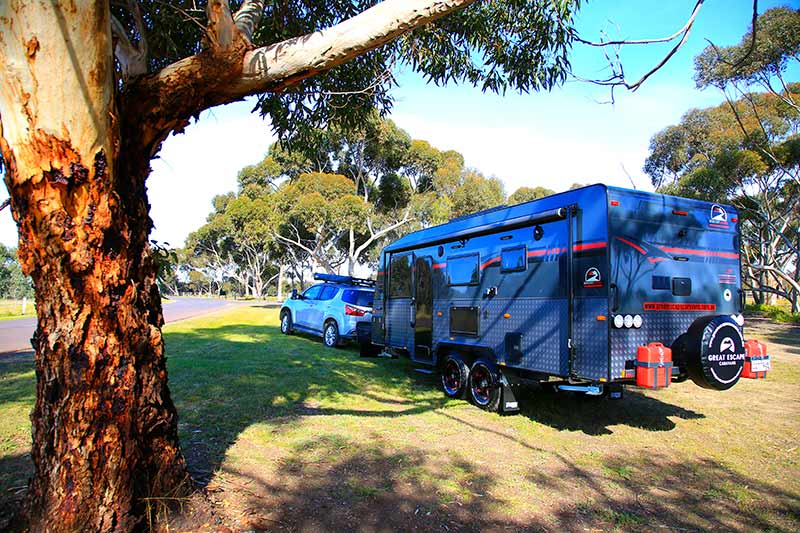 This caravan rides on a substantial 6in chassis (including a 3in raiser) with a charcoal Hammertone finish. Great Escape has opted for a 3500kg-rated Dexter Torflex independent suspension system and also fitted Dexter Sway Control.

With its high waist of protective checkerplate and decent ground clearance, I see no reason why this van wouldn’t perform well in semi-offroad conditions; however, it may be worth lagging the unprotected sections of grey water plumbing underneath with offcuts of carpet or rubber before tackling long stretches of gravel. 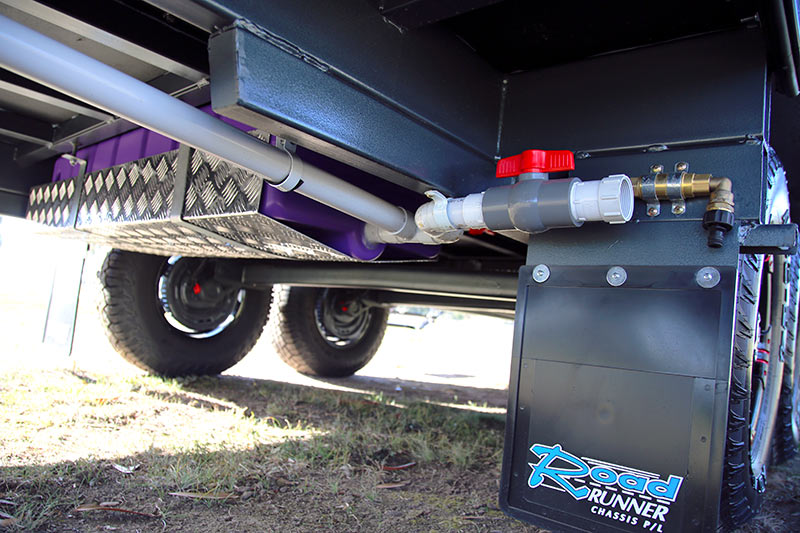 Among the other features that Great Escape Caravans has fitted as standard are a reversing camera, rear jerry can holders, awning lights, a fold-down picnic table and more.

By any measure, this is a highly-specced caravan that well and truly looks the part.

Great Escape Caravans set out to create a caravan that would be ready for free-camping without further modifications, while keeping the family comfortable, and I think Great Escape has achieved that goal.

What’s more, the FX Family Escape Black Series Deluxe has good looks to match its refined finish, both inside and out.

Chassis: 6in RHS with 3in raiser, 6in extended A-frame, and Hammertone finish